“One thing above all else will restore order to our streets,” wrote Sen. Tom Cotton, “an overwhelming show of force to disperse, detain, and ultimately deter lawbreakers.” The senator has advocated extraordinary measures involving the domestic deployment of uniformed soldiers for several days amid mass protests in American cities during the day and wanton violence, rioting, and looting by night. This exhortation is not new for him, but the venue in which it was placed—the New York Times opinion page—inspired a frenzied revolt from within the journalistic institution that published him. More remarkable, the aggrieved staffers and writers at the Times generally declined to issue a counterargument. They simply declared Cotton’s arguments anathema and sought to wield whatever power they could muster to see them banished.

New York Times editorial page editor James Bennet tried to explain the paper’s position to its angry staff under the guise of a letter to its readership. “We understand that many readers find Senator Cotton’s argument painful, even dangerous,” he wrote. “We believe that is one reason it requires public scrutiny and debate.” But that was not good enough. The Times soon reported on the insurrection unfolding within its own ranks, citing at least three unnamed journalists who informed them that the op-ed had jeopardized their ability to do their jobs because “sources told them they would no longer provide them with information.” At least one contributor insisted she had turned down the opportunity to write for the Times to protest the paper’s editorial judgment.

“Tom Cotton is able to (and has) made his views on this publicly clear elsewhere,” Buzzfeed News reporter Rosie Gray observed. “Does NYT not realize that ‘debate’ can occur somewhere else outside its own pages.” Indeed, it can and it is. To open a window and survey the streets outside is to be appraised of the state of the ongoing national debate over the use of overwhelming force to subdue several nights of riotous violence, looting, and threats to the safety of civilians and peace officers alike.

The position maintained by Cotton is not a fringe one. His views are reflective of majority opinion in this country, according to a Morning Consult poll released on Tuesday which found that 58 percent of all Americans and even a plurality of Democrats—48 percent—support “calling in the U.S. military to supplement city police forces.” Simply opting out of this discussion won’t make these debates disappear. The effort by journalists, columnists, and staffers at the Times to deem this widely held opinion abhorrent without ever substantively engaging it is an act of  vanity and an assault on empiricism.

It is, in fact, impossible to fully comprehend this reaction from Times staffers without a proper understanding of the fact that this is an argument they are losing. Cotton’s advocacy is not some academic abstraction. In response to the sustained period of civil unrest that contributed to a state of national apprehension, 23 states have already activated their National-Guard forces: Arizona, Alaska, California, Colorado, Florida, Georgia, Illinois, Indiana, Kentucky, Michigan, Minnesota, North Carolina, Nevada, Ohio, Pennsylvania, South Carolina, South Dakota, Tennessee, Texas, Utah, Virginia, Washington, and Wisconsin, and the federal jurisdiction of Washington D.C.

Discerning observers will note that many of these activation orders were implemented by Democratic governors. New York City is situated in a state that has declined to call up the National Guard. And yet, the offenses persist against which these reporters and their compatriots in the streets protest. Moreover, the peaceful and righteous demonstrations that devolved into mayhem were not inspired by the presence of soldiers on America’s streets. The threat that the protests are addressing is the one posed by municipal police—officers who answer to the usually Democratic elected officials who preside over America’s cities. The hyperbolic reaction to one Republican senator’s intervention in what was an internal dialogue on the left is a flight to the familiar comforts of partisan politics.

It is possible to make a cogent argument against Cotton’s remedy for this unrest, and even against the majority of Americans who agree with him. Professional polemicists like the Washington Post’s Dan Drezner have done just that. The use of military forces to subdue demonstrations like these can have unpredictable political consequences and sow the seeds of discord and conflict that persist for years—even generations. Such orders should not be given lightly. But that is an argument reserved to those who have not let their capacity for rational debate atrophy amid years of intellectual isolation. These Times staffers are not making an argument; theirs is an exercise of power.

Ultimately, this is not a debate over competing values. A commitment to a journalistic exploration of divergent opinions and disparate facts (an ideal that prevailed when the Times published op-eds by Vladimir Putin, Recep Tayyip Erdogan, and the Taliban) is a value. Dedicated discussion and debate in our collective pursuit of the public good is a value. What these staffers have issued is an ultimatum: Treat Cotton’s assertions as though they were anathema, the subtext reads, or this institution will suffer.

History is littered with discarded ideologies and dogmas that were duly stigmatized, but you cannot bypass the stage at which you anathematize those principles by deconstructing them. Just declaring a point of view beyond the pale does not make it so. That is a recipe for relegating terrible ideologies to the shadows where they metastasize in the absence of moderating influences, and from those shadows they are sure to return.

None of this is to say that Cotton’s views are repulsive. We have not yet established that they are, because those who insist as much do not deign to offer an argument to that effect. To make such a case would require a capacity to craft a rational and compelling case. That is a skill that is shockingly absent within the ranks of the New York Times. 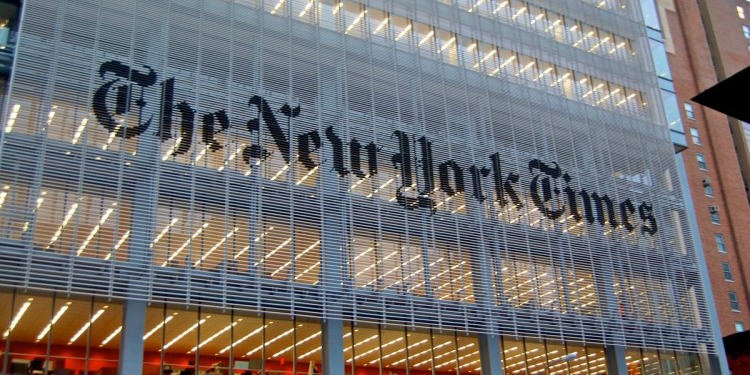