On January 6, 2021, the president of the United States fomented a violent insurrection against the federal government.

On this point, the semantics matter. This was not a coup d’etat, the definition of which is an organized effort to remove the existing government, in which all the levers of governmental power are seized by force. Nor was this a mere protest. No sane observer could equate what happened yesterday with a public demonstration of dissent which, though not necessarily law-abiding, is nevertheless a peaceful display. This was an organized, terroristic assault on the seat of elected government.

The president organized yesterday’s mob. On its eve, he appealed to the crowd directly—as grave a civic offense as the Founders dared to imagine—for the redress of his political grievances. He threatened Congress with street action if they did not reject the voters’ verdict. At the rally, he egged the crowd on, legitimizing the delusions spoon-fed to them by some members of Congress, that the 2020 election could somehow still be overturned. And he guided the mob toward the Capitol and set them loose, resulting in terror and vandalism this country has not seen in that hall for more than 200 years.

This was not an organic and spontaneous expression of rage. It was a planned, organized, and orchestrated attack on the U.S. government. The rioters were in constant communication with one another. They targeted specific members of government with violence. And as police later learned, the plotters were armed with improvised explosive devices and Molotov cocktails, which were strategically stationed around Washington D.C.—including at both the Republican and Democratic National Committee offices.

The collection of violent nihilists who descended on the Capitol building had no coherent political program beyond violence and mayhem. They are no one’s constituency, and they deserve to be treated like the contemptible political orphans they are. But we have not done that. Cretins and fools who fear nothing as much as they do a comprehensive theory of events that indicts anyone other than their political adversaries will reject this notion, but prominent actors from both parties—yes, both sides—have for years found the mob a useful tool. And because of that recklessness, what happened yesterday could be just a sign of what is to come.

Donald Trump lionized violence in service to his political claims from the moment he first ran for office, but the first expressions of violence in his name occurred in March of 2016. Then, following several months in which he fantasized aloud about the prospect that his supporters might lash out violently, someone did just that. But rather than condemn this criminal act, he promised to pay the legal fees of those who followed this example. And while Republican lawmakers condemned Trump’s accommodating instincts at the time, particularly those who were competing with Trump for primacy over the GOP, their sense of urgency faded after he took the White House.

In the months and years that followed, Trump would reprise this act, praising the violent mobs who lashed out in his defense. This is what led to his indefensibly confused and ambiguous response to the racists and rioters who descended on Charlottesville, and it’s what led him to call for counter-demonstrators—”GREAT PATRIOTS!”—to confront the violent protests that erupted over the summer of 2020 following the killing of George Floyd.

It would be a mistake to attribute this convergence of interests between Trump and the mob to a shared ideology. There is no ideology on display here other than the idea that meting out pain to the right people is a virtue. The mob is nothing more than a tool for Trump. They, among other instruments, strike fear in his enemies and allies alike. The mob, too, sees Trump as a vehicle for power and influence, as do the Republicans who have abetted Trump to this point. All are complicit⁠—passively or otherwise⁠—in the violence we’ve witnessed for the past four years.

But Democrats, too, countenanced their share of violence. Just as Trump declined to condemn those who committed violence in his name in 2016, Democrats looked the other way as vicious counter-demonstrators descended on Trump-campaign events, assaulting peaceable rally-goers and vandalizing the surrounding property. Democratic lawmakers and their allies in media heaped praise on the conglomeration of malcontents calling itself Antifa merely because it nominally claimed to be “fighting fascism.” And as city after city was engulfed by riots last summer, Democrats declined to condemn the excesses to which demonstrators appealed in the name of racial justice. Indeed, when the chaos in American streets was addressed at all, it was framed as a wholly righteous and unblemished demand for historical rectitude.

And while Democrats looked the other way, left-leaning media embraced the utility of street violence. “Riots are destructive, dangerous, and scary,” Vox.com observed, “but can lead to serious social reforms.” In an unusually soft interview with NPR, author Vicky Osterweil insisted that “looting is a powerful tool to bring about real, lasting change in society.” As COMMENTARY‘s Christine Rosen observed at the time, excusing the violence as though it was an anomaly and not a consistent feature of these demonstrations became a media fixation. “Group Breaks Off of Mostly Peaceful Protest, Vandalizes Police Station, Sets Courthouse on Fire,” read one NBC News headline. “Third night of looting follows third night of mostly peaceful protest,” asserted another from the Wisconsin State Journal. To even call what municipal police routinely deemed riots “riots” was, in the estimation of CNN’s Chris Cillizza, an act of “desperation” by embattled Republicans.

If anyone wants to know how we arrived at this lamentable time in American history, the place to look for answers is in the mirror. Violence does not happen in a vacuum. One side’s menace feeds off the other’s and justifies its own actions based on those of its opponents. You cannot excise one but not the other⁠—both must be anathematized.

This shameful past does not have to be a portent of a violent and unstable future, but that will be our fate if responsible politicians continue to see disturbed and impressionable people as a weapon to be harnessed and directed at their domestic political opponents. If cynical politicians continue to lie to their constituents, feeding them comforting fictions about how the country’s institutions are tainted and arrayed against their interests, we will endure more insurrections, more violence, and more instability. And that will have profound consequences.

As I wrote in my book, published two years ago this month, condemning political violence in whatever form it takes isn’t evasive. It’s consistent. Anything less is a corruption of the sort that “eats away at the foundations of a healthy society. And one day, when the rot has been ignored for so long that no one believes it can be expunged, another mob will come along. And that time, the republic’s weakened edifice may not withstand the pressure.” Let January 6 be a wake-up call. Orphan your violent. 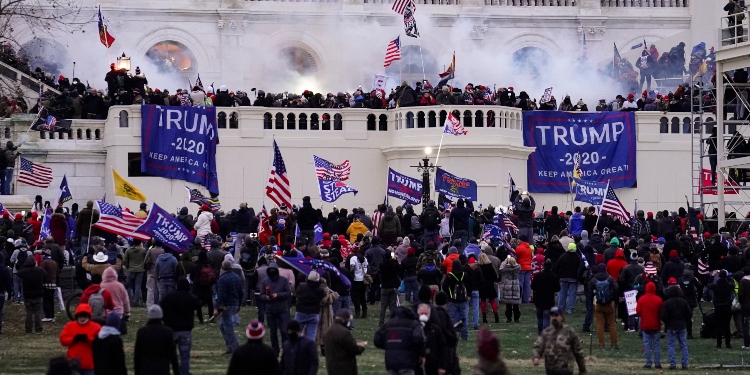