An outbreak of coronavirus at the White House, which has infected not just the president and his senior staff but also at least three Republican senators, has presented Democrats with an opportunity. They seem eager to make the most of it.

In a letter addressed to Senate Judiciary Committee Chairman Lindsey Graham, the committee’s Democratic members insisted that confirmation hearings (to which they had already objected on procedural grounds and which some Democrats had already threatened to boycott) must be postponed indefinitely due to concerns about the health and safety of senators and their staffs.

The letter reminds its readers that at least two of the three Republican senators who contracted COVID-19 are Judiciary Committee members, and CDC guidance advises anyone exposed to this disease to isolate themselves for at least 14 days—even if they test negative. Moreover, the remote hearings that the committee has conducted throughout this pandemic are “not an adequate substitute.” The whole thing must be put on hold. “To proceed at this juncture with a hearing to consider Judge Barrett’s nomination to the Supreme Court threatens the health and safety of all those who are called upon to do the work of this body,” the letter insists.

Senate Minority Leader Charles Schumer was more direct. “CDC guidelines” mandate “testing and isolation” for anyone who might have been exposed, he said. “That includes Judge Amy Coney Barrett and anyone else she was in contact with.” It is apparently immaterial that Barrett already contracted COVID over the summer and tested negative on Friday following the president’s diagnosis. Nor do these guidelines appear to pertain to Joe Biden, who was in a position to become exposed to this disease during last Tuesday’s debate, and who tested negative on Friday before promptly boarding a plane to Michigan for a campaign event.

Surely, the event that has sickened so many in the president’s orbit has accentuated the anxiety around this pandemic. But given that this outbreak has only led Democrats to reissue demands that they have already made or reiterate threats they already levied, it’s also safe to assume these demands are merely a new tactic in an ongoing strategic campaign to derail the Barrett nomination.

And maybe it works. Maybe the public pressure on Republicans to abandon this course of action is too great. Maybe the number of Republicans who come down with COVID-19 reaches the point of critical mass, preventing the majority party from convening in numbers sufficient to get any business done. Absent those conditions, however, Democrats don’t have many tools available to them to prevent this nomination from proceeding.

One idea that has been circulating among progressives is that Democrats should get out of Washington and get off Zoom—in effect, a selective boycott of legislative affairs. That would deny the Republican majority the 51 senators needed to represent a quorum and would prevent the Judiciary Committee from convening. This, too, was a maneuver that progressive activists had openly contemplated even before this latest wave of high-profile infections. Recent developments provide Democrats with a more legitimate pretext for such dramatic action, but it nevertheless rests on the assumption that Republicans would not move heaven and earth to confirm Amy Coney Barrett to the bench before the election. There are few indications that Republicans are willing to make that sacrifice.

Senate Majority Leader Mitch McConnell plans to put this nomination to a full vote of the Senate when it emerges from committee on a preset schedule, and he sees no reason to amend that. “We’ve been operating in the same environment now since the 1st of May and been able to do Senate business,” McConnell said even after he was made aware of his colleagues’ illnesses. “There’s no reason why we can’t continue to do that.”

If there was any one covenant that soothed the institutional GOP’s trepidation toward the prospect of a Trump presidency in 2016, it was his pledge to appoint conventionally conservative justices to the federal bench. That promise got Republicans through the numerous allegations of sexual assault against the candidate, his assaults on the character of a Gold Star family, and the infamous “Access Hollywood tape.” And Trump has made good on his pledge. It would be a fitting coda to the Trump presidency that this Supreme Court nomination is actually advanced by an event that renders this president even more of a political liability.

And though the Republican Senate majority is in as parlous shape as the president’s reelection prospects (presuming the polls are to be believed), recent history suggests the Senate GOP has little to fear from charging headfirst into a confirmation fight. A floor vote for the nominee absent the consent of the Judiciary Committee would not be unprecedented. Before the 20th Century, that was a common occurrence. Democrats will try to affix an asterisk to Barrett’s name if she is confirmed in such a way, but this contrivance would not rob her rulings of any weight. Ultimately, there is scant evidence to suggest such a maneuver would give way to a bigger backlash against Republican governance than the one that seems already to be brewing.

Will Republicans regret forcing through this confirmation if they are relegated to the minority in 2021? Perhaps. But Republican voters will be reminded of the necessity of that sacrificial charge with every contentious ruling from the high court. What Republicans need more than anything now is for every part of their base to show up this November and every November. The surest way to fail in the pursuit of that objective would be to fail to live up to their part of 2016’s bargain with Trump. Incidentally, it would also be the single most effective way to convince Republican voters that the party, and not this president, was the problem all along. 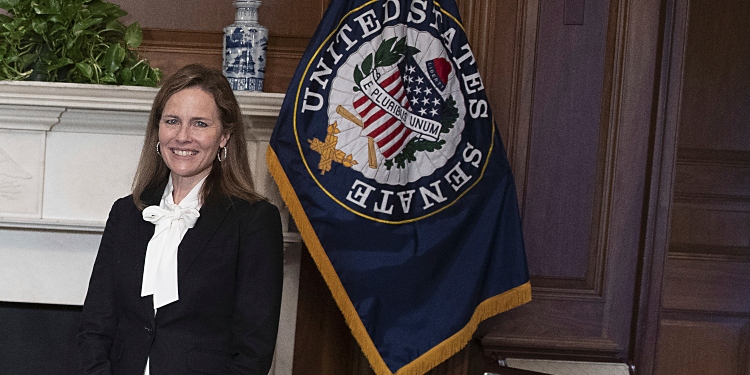