Foresight is a utopian goal. Even the brightest and most well-versed in their fields often fail to accurately predict the future. “Of course they do,” you might say. “Who is subjected to the unreasonable expectation that they peer into a crystal ball and anticipate future events?” Well, for starters, those with the unenviable task of keeping America safe from all manner of threats.

History is brimming with predictions related to national security imperatives that were upheld as veritable canon right up until the moment they were abandoned as flawed. In just the last quarter century, the breakup of the Soviet Union, the denuclearization of South Africa, China’s rise, and the events of 9/11 and their infinite consequences all confounded the soothsayers. Prediction in the realm of defense-related issues is a fraught enterprise.

But no record of failure will keep future generations from bellying up to the table and pushing in their chips. The latest fad that has come to dominate the attentions of our would-be Cassandras is the matter of climate change, and specifically the immediate threat this phenomenon poses to American national security. Washington Post opinion writer Catherine Rampell is the latest to submit a classic example of partisan agitation disguised as dispassionate analysis related to this vogue subject on Thursday. She contended in that essay that the Republican 2016 presidential field, one primarily composed of various breeds of hawks, is so blinkered by their ideology that they have thus far refused to address at least one glaring national security threat: That posed by global temperature fluctuations and the chaotic weather patterns the result.

In this painfully transparent bit of political advocacy masquerading as defense analysis, Rampell praised Barack Obama’s sagacity on climate issues and scoffed at the GOP field for signing the “No Climate Tax Pledge.” In a galling and audacious effort to frame Republicans as fear-mongering cynics and climate change alarmists as sober forecasters, Rampell contended that those GOP aspirants that do not regard weather pattern shifts as a threat as grave as, say, the invasion and annexation of territory in Europe by a revanchist nuclear power, are simply “incoherent.”

“Actually it’s worse than incoherent,” she averred. “It’s an oxymoron.”

But this piece did not consist entirely of polemics. Rampell did marshal some evidence to buttress her contention that America’s defense establishment is growing ever more concerned about the threat posed by climate change. To support that conclusion, she produced the Pentagon’s 2014 “Climate Change Adaptation Roadmap.” Rampell noted that the DOD has dubbed climate change a potential “threat multiplier.” She added that this report, and others like it, have “warned in no uncertain terms of the severe threats” posed by climate changes.

No climate catastrophist would earn his or her stripes without deploying the vituperative and insulting claim that those who remain skeptical of the doomsday scenarios are indulging in “denialism.” The appropriation of the term, once exclusively used to describe the virulent strain of anti-Semitism that dubbed the Holocaust a myth so as to delegitimize post-War reparations to the Jewish people, has become a common form of self-validation among modern armchair climatologists. Only a few on the right would “deny” that the ever-changing climate is, in fact, changing, but many others do take issue with the notion of anthropogenic global warming or the many proposed means of addressing it. Rampell’s use of that term is as crude as it is ill-informed, but so is her citation of the Pentagon’s 2014 climate report.

There is perhaps no field of study (or commerce, as the case may be) as flawed as the climate-related catastrophic prediction market. The late 20th Century, contentions that a coming ice age and the “population bomb” would leave the planet a dystopian Hellscape by no later than the year 2000 should have shown all aspiring Malthusians the error of their ways. Unfortunately, the last generation’s example has not stopped their forbearers from staring dismally into computer models and warning of 50 million climate refugees by the year 2010 or the end of snow. The same is true of DOD predictions, some of which the Pentagon is compelled by law to make on a semi-regular basis.

Bill Clinton’s former Secretary of the Navy, Richard Danzig, composed a rather brilliant dissection of the psychology and chronological constraints that render much defense-related prediction useless in his 2011 report, Driving in the Dark: Ten Propositions about Prediction and National Security. In this paper, Danzig concluded that a bureaucracy’s predictive abilities are necessarily limited. You won’t, however, hear that concession from the Pentagon. “Conceding uncertainty would weaken budgetary claims, power, and status,” Danzig noted.

“The number and diversity of variables that influence the national security environment confound multi-decade forecasting,” Danzig added. “Accurate prediction would need to anticipate changes in, among other things, technologies, economies, institutions, domestic and international politics and, of course, the nature of warfare. Each of these alone would be imponderable. Getting them all right at once is wildly improbable. Worse still, the evolution of these variables is complex and nonlinear.”

As for the Pentagon’s 2014 weather report, it is not the first Defense Department document to warn of a possible coming climate catastrophe. In 2004, the DOD issued a similar report that predicted that by now the polar ice caps would melt away every summer, low-lying parts of California and the Netherlands would flood, and global temperatures would rise by as much as half a degree per year.

“When you are looking at worst-case 10 years out, you are not trying to predict precisely what’s going to happen, but instead trying to get people to understand what could happen to motivate strategic decision-making and wake people up,” Pentagon consultant and co-author of this report, Doug Randall, told the Washington Times. “But whether the actual specifics came true, of course not. That never was the main intent.”

Rampell cites this report in her column, but she does not make note of the many frightful predictions that failed to come to pass.

And don’t expect any more climate-related reports from that other agency responsible for the preservation of American national security, the CIA. America’s intelligence establishment shuttered that project. “A CIA spokesman confirmed that the agency had ended its MEDEA program, a 1990s-era intelligence program restarted in 2010 under President Obama,” National Journal reported. “The collaboration gave scientists access to intelligence assets like satellite data to study climate change and inform on how its impacts could inflame conflicts.” That revelation comes just days after President Obama insisted that climate change is and remains “a serious threat to our country.”

Any military historian who has studied the assault on Gallipoli or the siege of Bastogne will tell you that weather is and will always be a major factor with which a military’s logistical planners must contend. But the limits to mankind’s predictive capabilities should be evident to anyone who has ever seriously studied the history of climate science. Making climate-related predictions with a preordained conclusion in mind, and a transparently political one at that, reduces the subsequent analysis to something utterly dismissible.

But more disturbing is the notion expressed by Rampell and others that the threat posed by unpredictable weather is commensurate with that represented by Beijing’s construction of artificial islands meant to serve as military bases in the South China Sea’s contested archipelagos, Moscow’s destabilization and outright invasion of its neighbors, or the Islamic State’s expansionism, terrorism, and weakening of the very idea of Westphalian sovereignty. To equate these threats with handwringing over the temperature and weather is illogical. Perhaps the impulse to equate weather with armed conflict is psychological; a means of assuaging one’s implicit guilt for being so consumed with frivolities. Maybe it is a plea of sorts — a way in which climate fanatics might stake their claim to a place at the adults’ table.

There is one thing that Rampell did prove with her brief column. There is someone in this debate that is so rigidly dogmatic that they cannot be trusted to opine with any authority on American national security affairs, but it isn’t the GOP’s 2016 field. 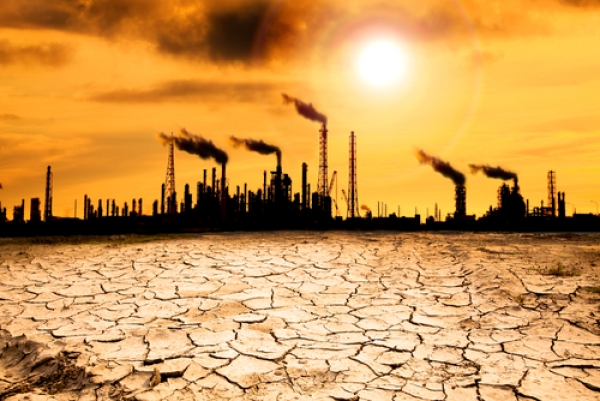