You’d be hard-pressed to find a mainstream Democrat or prominent liberal defending the violence that erupted on Wednesday night in Berkeley, California, in response to a planned appearance by professional agitator Milo Yiannopoulos. There, over one hundred masked rioters attacked police, set fires, pepper sprayed President Donald Trump’s supporters, and used Molotov cocktails and commercial fireworks to terrorize bystanders. You’d have similar difficulty finding conventional liberals to defend the chaos and violence that occurred in several cities on the day of President Trump’s inauguration. And what Democrat would stick their necks out for those who attacked pro-Trump rally-goers in places like Chicago, Tucson, Costa Mesa, and San Jose? And yet, this violence is not occurring in a vacuum. It behooves the left to ask what is catalyzing a distinct rise in political violence.

To hear the rioters who descended on the campus of University of California, Berkeley, tell it, their violence was a form of anti-fascism. “We won’t put up with the violent rhetoric of Milo, Trump, or the fascistic alt-right,” said one Berkeley history student, standing amid the flaming debris of resulting from his comrades’ display of tolerance. “We are willing to resist by any means necessary.”

“Is it O.K. to hit a fascist,” the New York Times asked earnestly. The question had to be raised. After all, so many prominent liberals were defending and even cheering an on-camera assault on the alt-right activist Richard Spencer. It is a wonder the article consisted of more than an admonition to those contemplating criminal battery.

For some on the left, civilized behavior has been indefinitely suspended in service to a cause. The “resistance,” as liberals who both oppose Donald Trump’s agenda and are appalled by his invocation of racially anxious rhetorical themes have dubbed themselves, necessitates violence. The very name of their movement invokes images of French partisans valiantly sabotaging the designs of Nazi occupiers and Vichy collaborators. After all, there is no nobility in passively casting a scornful eye on the Wehrmacht as it parades down the Champs-Élysées. Posterity bestows virtue only upon those who risked their lives in defense of liberty.

There has been more than a passing reference to the notion that Donald Trump and his administration represent a similarly existential a threat to the American republic. Writing for CNN, historian and student of history’s fascist movements Ruth Ben-Ghiat is convinced that the Trump administration’s “blitzkrieg” across the bureaucracy is the spear point of a “coup.” “How fascist is Donald Trump?” asked Georgetown University Professor John McNeill in the Washington Post. “He is semi-fascist: more fascist than any successful American politician yet, and the most dangerous threat to pluralist democracy in this country in more than a century…” Liberal columnists and entertainers have been calling Donald Trump a fascist demagogue for over a year. This kind of conditioning eventually yields a Pavlovian response.

Do Democrats see the incongruity in their hyperbolic attacks on Donald Trump as the vanguard of a fascist takeover of the United States and their tepid antipathy toward acts of violence committed in response to that perceived threat? It seems unlikely. Even Democratic officeholders have carelessly invoked Nixonian abuses in declaring the relatively banal acts of the Trump administration the inauguration of a “constitutional crisis.” Is the left supposed to respond to the banging of these drums with stoic silence and tearful remorse? Are we surprised that those who fancy themselves members of the “resistance” act like it? In labeling their political opponents illegitimate usurpers, they’ve created the conditions in which all manner of defiance—even violence—is justified.

The left should ask itself if there is any limiting principle to their “resistance,” or if they now believe that extremism in defense of liberty is no vice. Democrats would do well to consider how much their fantasy of a “resistance” to Donald Trump is fueling the real thing. 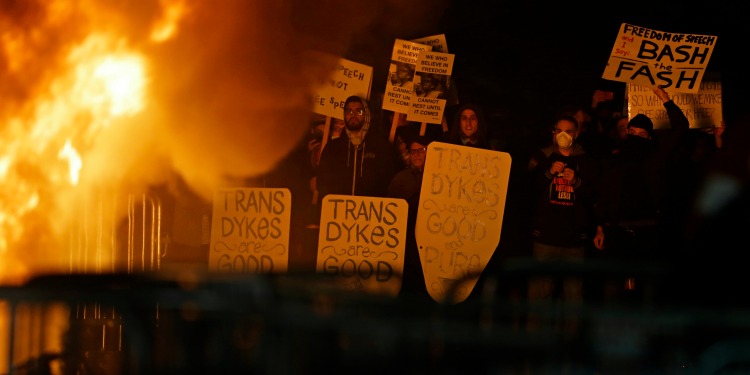