They think you’re an idiot.

We’re left with no other rational conclusion.

We can no longer assume that they believe you’re simply ignorant of the evidence, and that ignorance is exploitable. The proof that the threat of COVID infection is not a barrier to the reopening of schools for full-time, in-person education is pilled up hip-deep.

This isn’t a matter of guesswork anymore. Long-term studies of face-to-face educational settings in both the United States and abroad have produced little to “no evidence” that schools play a significant role in spreading this coronavirus. Further, we now have data to support long-observed anecdotal reports that the closure of schools (which includes the “hybridized” model, in which “open” consists of eight hours total in-person education per week) is as or more detrimental to the overall wellness of school-age children than their attendance in class would be. Increased incidences of psychological maladies, rising rates of depression and anxiety, and unacceptably subpar educational outcomes for children have become so prevalent that no one can honestly claim to be unaware of them.

Nor can you get away with leaning into your partisan biases to pretend as though you’re just being reasonably skeptical of this mountain of evidence. Even partisan Democrats were privy to a partisan Democratic administration’s initial efforts to lean into this science and seek the reopening of schools, only to be reminded that real political power lies with the organizational muscle of the teachers’ unions. It was Biden’s director of the Centers for Disease Control and Prevention, Dr. Rochelle Walensky, who initially insisted that the conditions that prevail today allow for the reopening of educational institutions. But that uncritical recitation of the existing research was met with such disdain from Democratic interest groups that she was forced to backtrack, claiming instead that schools will never be safe again until we control for conditions like “children with asthma” and “exposure to mold.”

“I think we need a lot more resources in order to get the schools safe,” Walensky now insists. That should tickle your progressive erogenous zones, right? Everyone always needs more money—”investments,” in the preferred liberal parlance. They can only be operating under the assumption that you have no idea that state-level departments of education already have roughly $50 billion in unspent aid allocated to them by Congress as part of the CAREs Act, and that, even following the CDC’s conservative estimates, reopening schools full-time safely would cost about $23 billion.

They must be assuming you are just too myopic, too busy, or too stupid to follow all this. And so, they’ve begun to appeal to the single most powerful heuristic of our time in the effort to force you to swallow these contradictions whole: negative partisanship.

You see, many of the people who have noticed all these discrepancies and inconsistencies are conservatives and Republicans. And you hate them, right? Maybe you need to be reminded of that fact.

Enter, Politico: “GOP tries to weaponize pandemic-exhausted parents against Biden,” the outlet’s headline blared. “Republicans see room to capitalize on the grim public health and economic situation the White House inherited from Donald Trump,” the article continued, “by trying to put Democrats on the defensive for being too removed from the pain or too slow-moving to address it.” The fiends!

Not to be outdone, the New York Times puts a slightly more dispassionate gloss on the same campaign of trite partisanship. “As President Biden struggles to keep his pledge to reopen schools in 100 days,” the Times reported, “Republicans in Congress are hammering at the issue as a way to win back alienated women and suburban voters.” Again, they’re assuming you just don’t know that, according to White House Press Sec. Jen Psaki, the White House’s definition of what constitutes “open” schooling is “more than 50 percent” for “at least one day a week.” With a bar set this low, Biden’s White House could declare victory even if schools that are currently “open,” according to his definition, were to close. 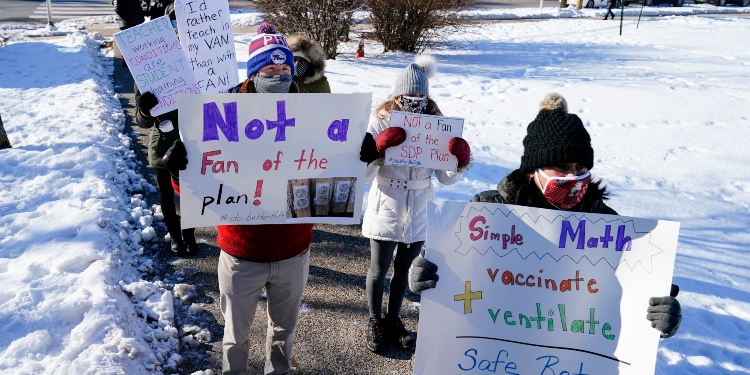