Amid a year filled with soaring stump speeches, intimate backyard town halls, and “interviews” with friendly faces streamed live from the candidate’s basement, Joe Biden spent 2020 promising the world to the Democratic Party’s activist base. They’re now coming to collect. And while he is hamstrung by his party’s exceedingly thin majorities in Congress, the Biden White House appears inclined to give them what they want.

Hours after taking the oath of office, Biden’s Department of Homeland Security issued a memorandum halting the deportation of most illegal immigrants for 100 days. Though the deportation moratorium doesn’t apply to migrants who arrived in the country after last November 1 or who pose a threat to U.S. national security or public safety, the suspension is otherwise quite sweeping. Illegal immigrants with previous convictions for crimes that do not rise to the level of “aggravated felonies,” which might include domestic and sex offenses and certain forms of fraud, will be immune from removal.

Biden plans to build on this foundation with a legislative push for comprehensive immigration reform. The White House’s first pass at a reform bill would provide the roughly 11 million undocumented U.S. residents an eight-year pathway to citizenship after first applying for temporary legal and, later, permanent residency status. The bill would also increase the number of green cards available under the “Diversity Visa” program, shorten wait times for aspiring lawful permanent residents, and promote family reunification.

While some of these proposals are desirable (relaxation of restrictions on asylum seekers and making the retention of graduates from U.S. universities easier, for example), much of this is precisely the sort of thing that catalyzed a populist right-wing revolt, culminating in the rise of single-issue candidacies like Donald Trump’s. For their part, Senate Democrats are already trying to reduce their activist left’s expectations of them and their evenly divided chamber. But the Biden administration’s opening bid is a big one.

The administration also appears inclined to leverage the ongoing pandemic to advance its ideological compatriots’ interests. Included in Biden’s requests of Congress under the auspices of COVID relief is an extension of a moratorium on evictions from now until the end of September. We have been living with the practical downsides of this well-meaning policy for months now: reduced mobility at a time of economic flux, property owners shifting the financial burden they’re incurring from non-paying tenants onto other sources of income, and an indecipherably distorted rental marketplace. And as the Dispatch’s Scott Lincicome observed, nearly half of all rental units are owned and managed by individuals—small investors who cannot absorb the blow Washington is meting out, even if it is eventually mitigated with some federal assistance.

Additionally, the Biden administration is seeking to compel Congress to raise the federal minimum wage to $15 per hour from its current $7.25. When small businesses are closing in droves, and amid persistently high unemployment, it’s hard to think of a more counterproductive proposal. California, which has been struggling to implement a graduating minimum-wage increase despite COVID-related commercial restrictions, has produced statistical evidence that the policy accelerated business closures and increased automation. And how have progressive municipalities like San Francisco responded to these foreseeable but adverse conditions? By attempting to penalize private firms that replace human employees with robots or algorithms, thus accelerating the flight of residents and businesses from the Golden State. The Biden administration apparently thinks this failed model of governance should be applied nationally.

What Biden cannot do via legislation, he’s pursuing through executive power alone. And some of his earliest executive orders risk inflaming the culture wars that have proven so animating for Republican voters.

The watchword of this administration is “equity.” As the New York Times reported, the chief of Biden’s Domestic Policy Council, Susan Rice, is “charged with ensuring that the new administration embeds issues of racial equity into everything it does.” But “equity” is not “equality.” While the latter refers to equal access to opportunity and the privileges and immunities in law afforded to all citizens of the United States, “equity” is something else; the redistribution of social and economic goods in accordance with a subjective assessment of the supposedly unearned advantages an individual assumes at birth. In the pursuit of this imperative, the Biden administration has already inflamed cultural tensions that could fuel a backlash.

A January 20 executive order aimed at “Advancing Racial Equity and Support for Underserved Communities” overturns a Trump-era ban on forcing critical race theory on federal employees under the guise of “diversity training.” Prior to the Trump-era ban on the practice, that anodyne label had been applied to pernicious struggle sessions in which federal employees were compelled to accept premises like “virtually all white people contribute to racism,” and that they, therefore, must “struggle to own their racism.” This lucrative new field of consultancy has compelled a number of agencies to shell out millions so taxpayer-funded public servants can be subjected to “power and privilege sexual-orientation workshops.”

Additionally, the Biden administration has sought to achieve “equity” by fundamentally adulterating the very concept of women’s sports. An ambitious executive order purportedly combatting discrimination based on gender identity or sexual orientation compels every educational institution that accepts federal funding to allow biologically male students who identify as women to play women’s sports or face administrative and financial penalties. Unsurprisingly, the gap in physical performance between male and female athletes does not disappear along with an individual’s rejection of their genetic identity, so this order will undoubtedly disadvantage women. And while it is likely to impact only a small number of students, those few examples will be broadcast far and wide in the coming months and years.

From economic policy, to legislative affairs, to the culture wars—Joe Biden appears poised to govern like the leftwing ideologue his critics thought he was. In the process, this unity president is sowing the seeds for a political backlash that no amount of “soothing centrist” rhetoric can avert. 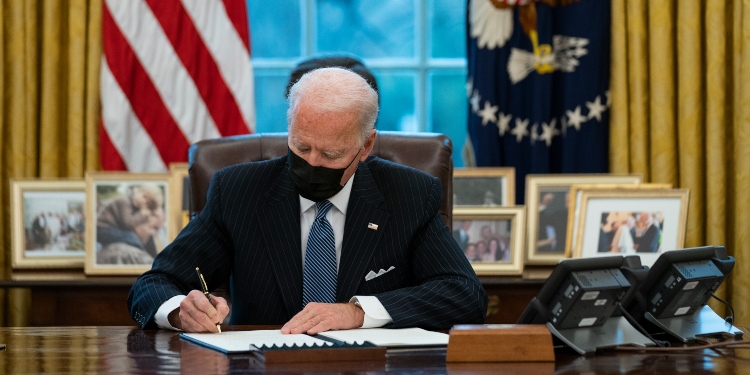