One of conservatism’s core strengths is its understanding of how precedents work. Precedent begets precedent. That which is unfathomable today can become inevitable tomorrow, and all it often takes to bridge that gap is for it to become imaginable. To conservatism’s critics, this seems more like paranoia than prescience. But you don’t have to be a conspiracy theorist to follow a trendline.

We don’t have to delve into ancient history to understand this phenomenon. We can study just one example: The national effort to reexamine the value of monuments dedicated to the Confederacy’s Civil War dead in the wake of the 2015 massacre of African-American churchgoers in South Carolina.

Amid a national outpouring of grief following that racist assault on the American social compact, the nation’s political figures engaged in a critical reexamination of the symbols of the Confederacy that still peppered the countryside. This was not by itself an excessive response to tragedy. Many of these memorials were dedicated not to the understanding of history but the revision of it. A consensus formed around the need to retire the Confederate battle flag from the public square and to intern the rebellion’s memorials in the museums where they belong, and it was a healthy exercise. This impulse took a turn, however, when activists began to look beyond the Civil War and into America’s antebellum past.

It wasn’t long before Democrats began to look askance at their party’s founders—Andrew Jackson, in particular. Jackson’s presidency isn’t worthy of much veneration, so when his name was stripped from the party’s annual Jefferson–Jackson Day fundraising dinners held around the country, there were few skeptics. That is, save for conservatives. Though they held no special affection for the man who presided over “the reign of King Mob,” they saw no limiting principle to the effort to relegate the 7th president’s name to the unmentionable column. If even conflicted assent to the contemptible institution of human slavery was anathema, then surely founders like George Washington, John Hancock, Richard Henry Lee, John Jay, and Thomas Jefferson were next.

No, no, conservatism’s critics insisted. Americans could handle a little contradiction. These were the farsighted founders who penned the first universal declaration of human rights, the foundation upon which the intellectual fight against slavery would be fought and eventually won, even if they participated in slavery in their times. But the conclusion was unavoidable.

“What actually is the difference between monuments to the Founding Fathers and Confederate leaders?” some began to ask. College students started advocating for the removal of campus statuary venerating the Founding Fathers. “I don’t care if it’s a George Washington statue or a Thomas Jefferson statue or a Robert E. Lee statue, they all need to come down,” CNN and an NPR political analyst Angela Rye insisted. “When you look at the fact that public monuments are supported by public funds, you’re asking me to subsidize the insult to my family,” MSNBC host Al Sharpton said of the National Park Service’s commitment to maintaining the Jefferson Memorial. Though he conceded there’s “a lot to admire in his thinking and his philosophy,” Democratic presidential candidate Pete Buttigieg agreed that the Declaration of Independence’s chief author doesn’t deserve to be memorialized.

Jefferson has since joined Jackson in ignominy. Church delegations named in Jefferson’s honor have been renamed. Memorials to George Washington have been taken down. This week, the city of Charlottesville, Virginia—the site of a traumatic conflict between white nationalists and counter-demonstrators in 2017—voted to no longer recognize Jefferson’s birthday because he was a slave owner (though he was also the author of the first federal anti-slavery law). These are precedents upon which our descendants will build their legacies. But what will they build themselves?

All this leads us to Donald Trump’s Triumph on the National Mall. Many commenters have objected to Trump’s assumption of the Independence Day celebration for himself, but it’s striking how few conservatives have applied their understanding of precedent to this moment.

Yes, Trump will surround himself with heavy military hardware. While this is a digression from a holiday dedicated to America’s republican ideals and not just its worthy men and women in uniform, this is evidence of overcompensation—not an impending authoritarian crackdown. Nor should our biggest concern be the Park Service’s dedication of a modest $2.5 million to this affair. Our concern should be the legacy Trump is establishing and how his successors will use it to their advantage.

The executive branch has decided to treat the event in the nation’s capital as it would an affair on White House grounds—providing VIP tickets to the Republican National Committee, influencers, and donors, but not their Democratic counterparts. The president insists that his address from the steps of the Lincoln Memorial will be non-partisan but followed up that claim with a quip about how Democrats plan to “destroy the country.” Observers can be forgiven for fearing that the event will become excessively partisan if Trump deviates from the script. But most disturbing, the president’s decision to commandeer the celebration of the nation’s birth in Washington has already made the event political. Counter-protesters are already prepared to show up in force, and a progressive group that regularly flies an oversized balloon caricaturing the president as an infant has secured permits.

Conservatives should be concerned not for how this president is forcing the Independence Day holiday to comport to the demands of his ego, but how the next president may do the same. It’s not hard to envision how a Democratic president with fewer reservations about nationalizing previously apolitical aspects of American life will build upon this example. The partisan politicization of shared cultural heritage strains the bonds of civil society, accelerates trends toward self-sorting into like-minded communities, and renders American life one unending battle for primacy. It’s exhausting, and it’s not healthy.

Conservatives know this instinctually. They knew it in 2015, and they know it today. It would be a tragedy if the demands associated with propping up Donald Trump led them to embrace a convenient amnesia. 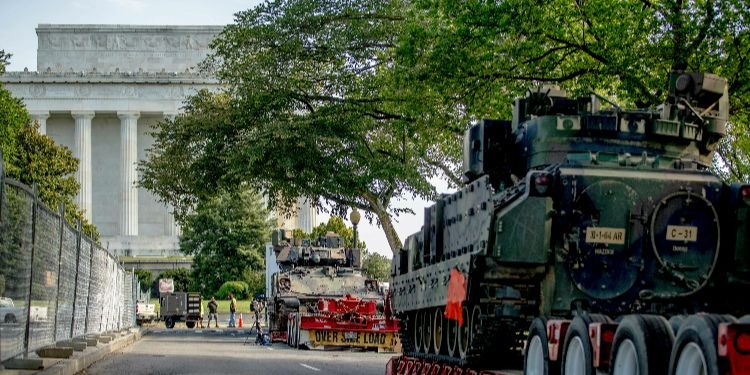