A dynamic is emerging that may define the rest of the 2020 campaign season. It’s centered around fear—fear of either the pandemic or of violent unrest in American cities. But not both.

On Thursday, vice-presidential candidate Kamala Harris will counterprogram the final day of the Republican National Convention with a speech focused on the pandemic and Donald Trump’s “profound failure of leadership.” This charge would seem to be an easy sell; polls have consistently indicated that the public has soured on Trump’s conduct. But that may be changing.

A recent Democrat-sponsored CNBC/Change Research poll of key swing-state voters found that, along with a tightening presidential race, voter perceptions of Trump’s handling of the pandemic are improving. Forty-seven percent of respondents approved of Trump’s efforts to contain the outbreak, up from 44 percent earlier this month and his best performance on the matter since mid-May. The most likely explanation for this improvement isn’t anything Trump has done but a general easing of COVID anxiety. That same poll found the share of voters with “serious” concerns about the virus declining modestly but measurably.

If that is real and the public is beginning to exhale, it’s not because of their blind optimism or a recalcitrant aversion to the facts. It’s a reflection of America’s waning caseloads. Nationally, new reported COVID-19 cases peaked on July 17 and have been in decline ever since. As the New York Times helpfully calculates, the number of new cases reported on August 25 is down 22 percent over the last 14 days, while newly reported deaths are down eight percent. That’s hardly anything to celebrate, but it is good news. It’s also terribly inconvenient for Democrats if the pandemic’s seeming intractability is also a source of political capital.

It would, of course, be recklessly premature and more than a little gauche for anyone in the president’s orbit to tout these figures. But save the occasional expression of regret for the conditions Americans are enduring, the Republican National Convention has mostly avoided the pandemic and its related hardships altogether.

That’s not to say that the GOP is shy about marshaling fear for political benefit. The urban unrest that has come to typify the long hot summer of 2020 now threatens to spill out from the nation’s largest metropolises and into its smaller cities and suburbs. The issue of rising violent crime rates is making its way up the charts of voters’ chief concerns, and this is one threat Republicans cannot be accused of downplaying.

“It seems as if the Democrats no longer view the government’s job as protecting honest citizens from criminals, but rather protecting criminals from honest citizens,” said Missouri-based attorney Mark McCloskey, who faces a felony weapons charge after he produced a firearm to scare off a menacing group of protesters from their St. Louis home. Democrats will “will disarm you, empty the prisons, lock you in your home and invite MS-13 to live next door, and the police aren’t coming when you call,” according to Rep. Matt Gaetz. The president’s son, Eric Trump, even accused Joe Biden of seeking to exacerbate these conditions by (falsely) claiming that he supports wildly unpopular proposals to “defund and disrespect our law enforcement.”

Honest Democrats are acknowledging that Republican strategy is working. Democratic pollster Stanley Greenberg found Biden’s lead over Trump expanded thanks mostly to prohibitive support among younger (less reliable) voters. That is not the case for older voters who have begun to turn away from Biden. “The crime issue ‘is pulling him down some,’ Greenberg said,” The LA Times reported. “For voters who are turning, ‘the trigger is the argument that protests are getting out of control.’” CNN anchor Don Lemon provided a more animated assessment of the threat to Biden’s political position. “The rioting has to stop,” he said. “It’s showing up in the polling. It’s showing up in focus groups. It is the only thing—the only thing, right now—that is sticking.”

To be clear, if the fact that several months of nearly unchecked riotous violence and vandalism in America’s dark-blue urban enclaves is “sticking” to Democrats, they have no one to blame but themselves. The public’s fear for their own safety and the preservation of their livelihoods isn’t a contrivance. Likewise, while it is not omnipresent, this deadly pandemic and the threats it poses are real and tangible. If these conditions have made the public anxious, that anxiety is more than justified.

But it is quite clearly in both political coalitions’ interests to ensure that you are properly afraid of only one of these issues and not the other. We can assume, therefore, that cooler heads will not prevail. A sense of proportionality and rational risk assessments will be discouraged. Hyperbole in pursuit of a climate of fear will be no vice. And if either the violence or the COVID threat dissipates, you will not be allowed to let your guard down. After all, the bad old days could return at any moment.

As campaign tactics go, encouraging mass neurosis in the voting public is, at the very least, ethically fraught. It is tragic that at least one of these efforts will prove successful. 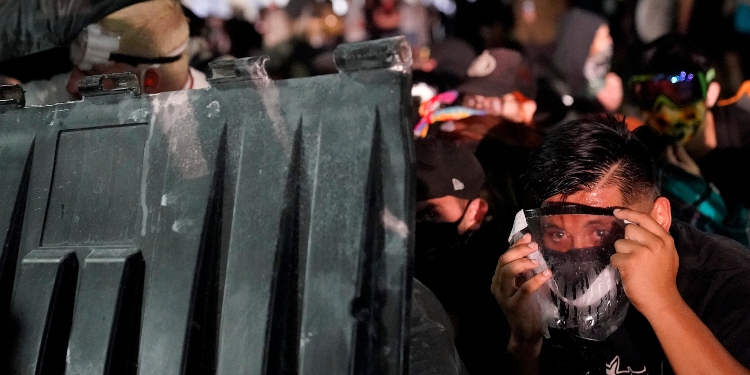