For several weeks, the Democratic Party has been at war with itself. An intraparty feud has broken out among the Democratic officials who govern America’s cities and their constituents who resent being aggressively overpoliced. Racial tensions in dark-blue urban enclaves have spilled into the streets. The public sector unions beholden to Democratic politicians in these municipalities are struggling to preserve their advantages against the forces of reform. The party is divided, almost down the middle, over the efficacy of radical measures that are anathema to the general public.

All these conditions should theoretically benefit the incumbent president. So, what does Donald Trump do at this potentially advantageous moment? Randomly exhume the corpses of Confederate dead and put them on a pedestal. Of course.

As the nation’s lawmakers turn their attention toward necessary but complicated reforms to the rules that govern the application of potentially lethal force by police—a demand spurned on by the overwhelming public revulsion toward the perception that minorities are too often on the receiving end of that force—the country is in a conciliatory mood. That mood compelled Army officials to finally endorse stripping the names of Confederate generals from the nation’s military facilities. It’s a small gesture of grace toward America’s citizens and service personnel of color, as well as a long-overdue reaction against the attitudes that once led public officials to erect landmarks to traitors against the Union. But the president was having none of it.

“These Monumental and very Powerful Bases have become part of a Great American Heritage, and a history of Winning, Victory, and Freedom,” the president inexplicably tweeted. “My Administration will not even consider the renaming of these Magnificent and Fabled Military Installations.”

The president’s instincts should leave conservatives not only perplexed and revulsed but feeling deeply insecure. Contrary to the claims of cynics who insist that Americans are deeply committed to racial antipathy, voters do not revel in this behavior. Americans are deeply discomfited by racial tension, and they resent it when the president exacerbates those tensions (as two-thirds of all voters, including nearly three-in-ten Republicans, believe he has in recent weeks).

Trump-voting Republicans are not immune from this discomfort. As the Atlantic’s contributing editor Yascha Mounk revealed after observing a political focus group, the wavering Trump 2016 voters he witnessed remain “defensive” about the president’s record on the economy and even his handling of the pandemic. “But they HATE how he handles race,” Mounk recalled. “This isn’t mild ‘he should watch what he says a bit more’ disagreement. They RECOIL from his divisiveness.” This has been observable across Trump’s presidency.

What was arguably his lowest moment—the three-day controversy in which the president couldn’t bring himself to unequivocally condemn the white nationalists who contributed to violence in Charlottesville—was his lowest moment, in part, because Republicans revolted. GOP lawmakers condemned his remarks, and the president’s job approval rating among Republicans collapsed to near record lows. Trump has bizarrely determined to reprise this low point just months before an election in which he is the underdog.

It’s not just that Trump cannot navigate the issue of race at a time of heightened racial tension. In a period recently typified by civil disorder, rioting, and looting in America’s cities—a condition the voting public does not appreciate—the president cannot even effectively communicate his commitment to law and order.

In yet another self-destructive tweet, Trump indulged in the conspiratorial notion that the aggression Buffalo police meted out against a 75-year old protester, who was shoved to the ground and bled from the ear as a result, might have been warranted. “Buffalo protester shoved by Police could be an ANTIFA provocateur,” Trump insisted. Press Sec. Kayleigh McEnany also justified the president’s assertion, claiming that this “individual has some very questionable tweets.”

Once again, Republicans were either put on the defensive or were downright critical of the president. All this occurs amid an outpouring of contrition and outrage from current and former administration officials over the decision to apply force to disperse peaceful demonstrators from a square outside the White House on the evening of June 1.

All of the above surely contributes to a counterintuitive condition: Even with the Democratic Party embroiled in internecine conflict, the president’s position continues to deteriorate. His bizarre behavior has left the conservative movement all but defenseless in the face of an onslaught of radicalism. It should be no comfort to Republicans that Joe Biden steadfastly rejects the demands of his party’s fringe elements. That fringe is on the ascendancy.

The vast majority of Americans of all political stripes support peaceful protests against police violence. They back major reforms to prevent future misconduct by law enforcement and see George Floyd’s killing as part of a larger societal problem. But, according to a recent ABC News-Ipsos poll, while 72 percent of Democrats opposed the deployment of military forces to quell the looting and riotous violence Americans witnessed last week, 52 percent of all Americans support such extraordinary measures (including majorities of key voting blocs like independents and Hispanics). And as another ABC News-Ipsos survey found, while only 34 percent of American adults back a movement to “defund the police,” a staggering 55 percent of Democrats are with the minority. And contrary to the efforts by savvier Democratic politicians to render that slogan incomprehensibly vague, a Huffington Post/YouGov poll showed that majorities across the partisan spectrum insist that it means to “significantly decrease the size of police forces and the scope of their work.”

Trump seems incapable of serving as a pole around which the majority of Americans who reject the Democratic position on these issues can rally. Even as Democrat-led cities sacrifice territory to insurrectionary secessionist mobs, Trump has left Americans who fear the prospect of civil disorder without an effective champion. Those forsaken Americans are apprehensive and frustrated today. Their inchoate emotions will congeal into anger soon enough. 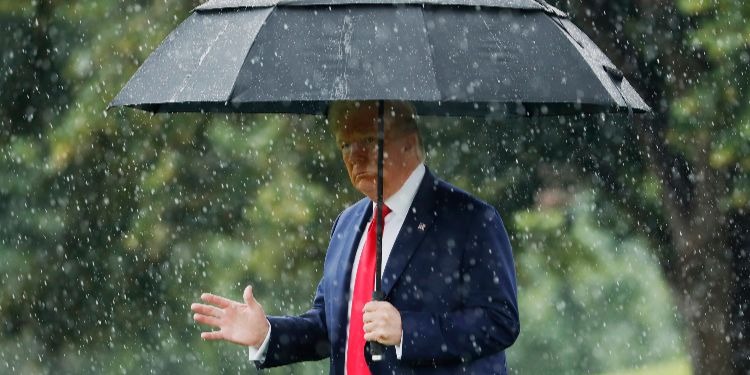