That is the ubiquitous refrain among the president’s critics following revelations that Donald Trump deliberately downplayed the threat posed by the SARS-CoV-2 virus. “You just breathe the air, and that’s how it’s passed,” Trump confessed to journalist Bob Woodward as early as February 7. “It’s also more deadly than even your strenuous flus.” And yet, what Trump was saying in public at the time did not reflect this danger. That deception was, the president admitted, intentional. “I wanted to always play it down,” Trump said. “I still like playing it down because I don’t want to create a panic.”

This disclosure should come as little surprise. “I knew it could be horrible,” Trump said of the pandemic in late March, but “I want to give people hope, too.” Nor is the apoplectic response to Trump’s candid comments entirely sincere. If it was, we might have seen a similar reaction when Dr. Anthony Fauci conceded without a hint of remorse that the administration misled the public about the efficacy of wearing a facemask. Both the lack of information around asymptomatic carriers and the urgent need to save personal protective equipment for hospitals necessitated this beneficent lie. That is an explanation, at least, if not an excuse.

“I don’t want to create panic,” the president said in his own defense on Wednesday. “And certainly, I’m not going to drive this country or the world into a frenzy.” That’s a defensible impulse, but it’s a new one for Trump. The coronavirus pandemic constitutes one of the few occasions during his presidency in which he sought to avoid cultivating a sense of dread.

From almost the moment he took the oath of office, Trump has not shied away from stoking panic. By February 2017, the president began insisting that “the murder rate in our country is the highest it’s been in 47 years.” It was a statistic that could buttress his contention that he alone could end the “American carnage” he inherited. But it was not true then, and it’s not even true now despite the ongoing civil disorder in American cities. Nevertheless, if Trump felt any compunction about exacerbating American anxieties, he kept it to himself.

At almost the same time, the president was also warning Americans that “many very bad and dangerous people may be pouring into our country.” There were, after all, “a lot of bad ‘dudes’ out there,” and a travel ban targeting Muslim-dominated nations in Africa and Asia was the only remedy. “Terrorism is a tremendous threat. Far greater than people in our country understand,” Trump said. Of course, terrorism was and remains a threat to the nation, but the president was never averse to describing this potential menace in the most lurid of ways.

By 2018, the president’s apprehensions shifted away from the threat posed by Asian migrants to the one represented by South American migrants. “Many Gang Members and some very bad people are mixed into the caravan heading to our Southern Border,” Trump pronounced in what would become the centerpiece of his midterm-election campaign theme. “Democrats are inviting caravan after caravan of illegal aliens to pour into our country, overwhelming your schools, your hospitals, and your communities,” the president warned without any apparent concern for the distress he might inspire.

As a messaging strategy, this fear failed to prevent a Democratic takeover of the House. But that failure produced a new threat, which Trump eagerly promoted: the revivification of socialism. In 2019, the president devoted significant portions of his annual State of the Union address and his speech to the United Nations General Assembly to the threat posed by socialism. But it was always the domestic political angle that most enlivened him. The House Democrats, Trump declared, “are endorsing socialism.” His rallies became increasingly dedicated to the “socialist nightmare” that Democrats would inaugurate if they controlled the White House. But by early 2020 and with Joe Biden’s ascension to his party’s presidential nomination, in part, as a result of rejecting his party’s more radical progressive elements, that message lost its resonance. It was replaced with a theme designed to reverberate across the marginally pro-Biden suburbs: precarious property values.

“You won’t be safe in Joe Biden’s America,” the Trump campaign declared in a 30-second spot featuring images of the rioting and lawlessness that have become all-too-typical over the course of this summer. But crime is just one aspect of the menace Biden represents. The other, Trump often insists, is Biden’s plan to “abolish the suburbs.” In an explicit appeal to “the suburban housewives of America,” Trump warned that his Democratic opponent would “destroy your neighborhood and your American Dream,” presumably by restoring an Obama-era regulation designed to prevent housing discrimination and ethnic segregation. The restoration of such an order, Trump averred, would lead suburbanites to be “bothered or financially hurt by having low-income housing built in your neighborhood.” As recently as Thursday morning, less than 24-hours after he defended his aversion for fear-mongering, Trump declared: “If I don’t win, America’s suburbs will be OVERRUN with Low-Incomer Projects, Anarchists, Agitators, Looters, and of course, ‘Friendly Protesters.'”

All of these are—by degrees and despite varying levels of imminence—real and looming hazards. The president’s willingness to bring them up even at the risk of offending effete sensibilities on the coasts is salutary. But he has established a pattern of being more willing to demagogue these issues than address them.

“Real power is—I don’t even want to use the word—fear.” In 2018, Trump offered this revealing insight to none other than Bob Woodward. But it is a power he wields selectively. Trump’s unwillingness to invite a panic over the real and present threat posed by the coronavirus contrasts so profoundly with his warnings over these more debatable dangers that it leads to one inescapable conclusion: The president is only apprehensive about scaring the public when panic is politically inconvenient. 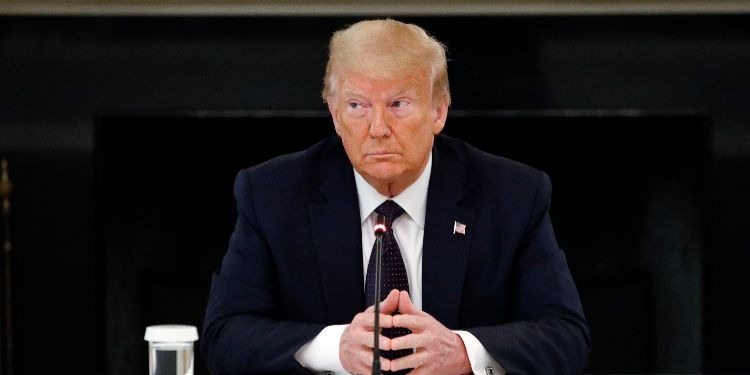