John McCain’s memory haunts Donald Trump. The president would like to pretend as though his antipathy toward the late senator from Arizona is based on McCain’s vote against one of several iterations of the GOP’s ObamaCare replacement bills or the fact that he provided the troubling but unverified Steele Dossier to the proper authorities, as though that was a breach of decorum. But that’s a smokescreen. Their mutual antipathy dates to the earliest days of the president’s campaign, in part, because McCain always had Trump pegged for what he was.

“When Mexico sends its people, they’re not sending their best,” Trump said just weeks after launching his campaign for the White House. “They’re bringing drugs. They’re bringing crime. They’re rapists.” To his credit, McCain rejected these comments and, along with former Sen. Jeff Flake, boycotted Trump’s appearance in Arizona. At that event, Trump trained his fire not just on Mexico but McCain as well. “We have incompetent politicians, not only the president,” Trump said. “I mean, right here, in your own state, you have John McCain.” McCain called the remarks “hurtful” and irresponsible “because what he did was, he fired up the crazies.” Trump replied by feigning offense on behalf of his supporters, calling for McCain to be primaried, and demeaning the senator’s service in the Navy by dismissing his time as a captive of the North Vietnamese as a sort of personal failing.

Thus, a feud began that now rages from beyond the grave. Trump has continued to fire volley after volley at the statesman, indifferent to the late senator’s inability to respond.

In a speech at CPAC upon his return from Hanoi, where McCain spent years as a hostage in intolerable conditions, Trump issued a veiled attack on the Senator. “He wrote a book and the book bombed,” Trump told reporters last month. And over the weekend, the president tore into John “last in his class” McCain for giving the unverified intelligence about Trump to which he was privy to the appropriate authorities. “I was never a fan of John McCain, and I never will be,” the president told reporters in the Oval Office.

In 2015, Trump’s attacks on the late senator prompted a deluge of searing rebukes from Republicans. Today, however, the response from the GOP is far more muted. Mitt Romney criticized the president. Johnny Isakson is reportedly preparing a “whipping” for the president. But the only Republican facing voters again in 2020 to muster a tweeted response, Lindsey Graham, was utterly devoid of the kind of passion he frequently summons in defense of principles far less essential than the respect for national service. In the following Tweet, Graham announced that he would kick off of his 2020 campaign bid alongside Vice President Mike Pence.

If, as it seems, electoral politics is compelling Republicans to compromise on yet another essential value to court Trump and the cult of personality that surrounds him, it’s a choice Republicans will regret. It will not ingratiate them with the broader American electorate. Nor it will yield them special considerations from Trump. No amount of flattery or deference from his fellow Republicans satisfies him.

The same political considerations seemed to be what led some Republicans to stow their objections to Donald Trump’s dubious assumption of legislative powers in declaring a national emergency to build his long-sought wall along the border with Mexico. “I can’t imagine one vote changes things too much for him,” a source close to Trump told National Review’s John McCormack when asked if Sen. Ben Sasse’s vote with the president had won him any goodwill in the West Wing. “Or changes the White House’s view of him to any great extent.”

Sasse has earned the benefit of the doubt more than some of his colleagues, but the GOP’s electoral concerns cannot be dismissed as a motivating factor. And if it is a factor, it’s a cheap rationalization. Republicans who consider themselves the more responsible stewards of the party can be forgiven for convincing themselves that whatever actions they take to keep their office are justified. After all, how would it benefit their constituents, their principles, or their ideological convictions if they were to lose? There is always someone more unscrupulous, more willing to prostrate themselves before Trump waiting in the wings. Why give them an opening? A minor compromise here, a forgivable sacrifice there; whatever it takes to keep power in the responsible hands of those who respect it.

This is a noble impulse, but a misguided one. One can make only so many compromises of principle in service to power before all that’s left is service to power. It avails no cause or constituency to bend before the demands of a demagogue. No principle can be preserved if its preservation requires the sacrifice of such basic graces as respect for our colleagues and friends who are gone. Down that road lies corruption, and the corrupted are only of value to the already corrupt. Nothing is worth that kind of accommodation, not even a seat in the U.S. Senate. 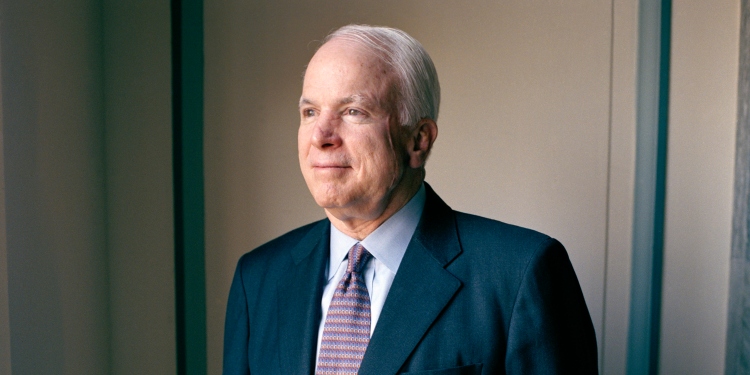