Arizona’s Republican establishment is panicking. The polls are tight, and Donald Trump is letting it slide into the Democratic column. Georgia is also starting to take on a bluish hue. YouGov’s polling has led the firm to indicate that the Peach State could flip to Democrats for the first time since 1992. Two surveys in Alaska now show Hillary Clinton surging with Trump stuck at just 37 percent. An independent candidate is surging into the lead in Utah. For Trump, the polls are painting a bleak portrait. The bottom is falling out. Republicans are facing the prospect of a landslide loss on the presidential level.

Trump is set to be soundly rejected by the American people and possibly by historic margins. For the noble forgotten man, who we are told makes up the backbone of the Trumpian electorate, this is bad news. Even for anti-Trump Republicans, though, the prospect of a landslide loss to Hillary Clinton presents a problem. Many Republicans saw Trump the man as an irredeemably flawed vessel, but nevertheless found merit in some of his policy prescriptions. To the extent they can be sifted out of the rhetorical muck in which they are buried, such semi-Trumpians may be inclined to rehabilitate some elements of Trumpism. They will contend that the man and his mouth lost this race but his ideas live. That would be a transparent fallacy. Trump’s issues, too, will have been rejected.

After inveighing against “the Establishment,” which is more of an expression of class angst than a policy position, the Trump campaign’s own issues page cites “trade war” as his first and, presumably, most salient policy stance. This admission puts the lie to Trump’s contention that he merely sought “fair trade” deals with the rest of the world. A trade war is, by definition, a conflict in which one side seeks advantage over another. In practice, this would mean fewer markets for American goods and higher prices at home. The voters in their wisdom will have rejected such a self-defeating course.

What about immigration? The Wall, that perennial crowd-pleaser, will also be made radioactive. That should come as no surprise. Poll after poll showed that voters disapproved of Trump’s signature immigration reform, including often a third of Republicans. Beyond the Wall, Trump’s approach to the immigration issue ranging from a “deportation force” to a “Muslim ban” (which Trump himself recently claimed had “morphed” into “extreme vetting” of prospective immigrants) will find a chilly reception from lawmakers after the GOP nominee’s loss.

There have even been some salient and longstanding criticisms of the GOP from those who label themselves “reform conservatives” that were embraced by the Republican presidential nominee in 2016. In his own crude way, Trump made the case that the Republican Party could not simply become the party of tax cuts for the nation’s highest earners. Trump not only abandoned the conservative premise that America’s entitlement programs need restructuring in order to remain solvent, he also flirted with creating new federal welfare programs from scratch. In the end, Trump will not only have underperformed Mitt Romney among swing voters, but he will have lost the support of core conservative Republicans, too.

To the extent that Trump has a coherent foreign policy program, it has nothing to do with his semi-isolationist critique of interventionism but rather that Moscow deserves a sphere of influence in Europe and Asia, to say nothing of the former Soviet space. If Hillary Clinton wins any sort of mandate from this race, it will include the latitude to safeguard American interests against a hostile and expansionist Moscow more aggressively than her Democratic predecessor.

From his pledge to outspend Clinton on infrastructure, to the political salience of the white working-class, to the scourge of inaccurate and misleading speech under the guise of political correctness; all will be crushed under the weight of what looks like a coming landslide.

Yet if Trump is set for a historic repudiation, it’s not altogether clear the rest of his party is headed for a commensurate decimation. Any number of unfortunate events may yet befall the GOP’s candidates down the ballot, but many Trump opposing voters are still inclined to support a “generic Republican”-led Congress. Moreover, at least one recent survey suggests voters are willing to vote for Republicans as a check on the inevitable President Hillary Clinton. As GWU Battleground pollster Ed Goeas learned in his most recent survey, the Republican Brand remains distinct from Donald Trump’s. The celebrity candidate is going down, but he may not take the GOP with him.

If Republicans meaningfully outperform Trump on Election Day, there will be a temptation among members of the conservative commentary class to take no lessons away from Trump’s rise. An unlikely alliance of semi-Trumpian conservatives and border hawks will blame the messenger for the disaster at the polls; not his message. This would be a tragedy—a wish masquerading as analysis. Donald Trump didn’t run for the White House on personality and affect alone. He had a message, issues, and a platform. All of that is set to suffer a resounding public rebuke. 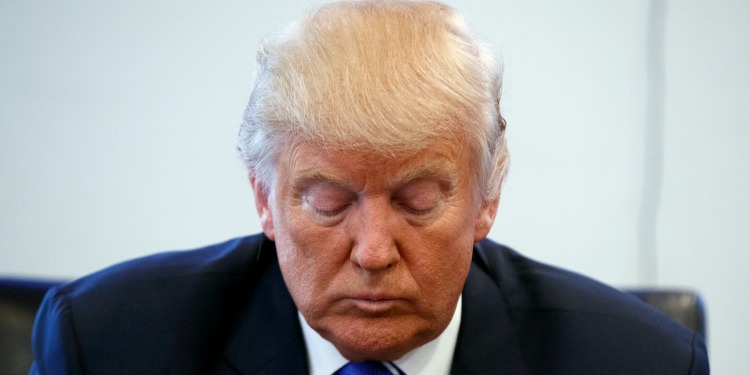