When the Obama administration took the unusual step of declining to defend the Defense of Marriage Act against legal challenges, conservatives warned that Democrats were setting a precedent they would regret. Regardless of how the transient administrators of the Justice Department feel about a given law, they had previously defended the edicts passed by Congress solely on their constitutional merits. This week, the Trump administration has applied this precedent to the Affordable Care Act. Previously, the administration has claimed that only parts of Obamacare were unconstitutional. Now, however, they argue that the whole thing should be struck down.

This is the president’s prerogative. Bad-faith laments from the opposition party about this terrible, norm-breaking decision should be summarily dismissed. Democrats are, however, unlikely to regret the politics that will follow the administration’s move against Obamacare.

Though it is somewhat counterintuitive, the dynamic that prevailed following the GOP’s repeatedly failed efforts to repeal and replace the ACA could end up being favorable to them in 2020. Republicans dispensed with Obamacare’s most unpopular provision, the individual mandate, in the 2017 tax code reform bill, rendering Obamacare simultaneously less financially viable but more popular. Thus, Republicans condemned themselves to a strange inconsistency in which they had taken ownership of Barack Obama’s signature health-care law.

Republicans have come to terms with their hypocrisy, and for good reason. They were positioned ahead of Trump’s reelection efforts as the defenders of the health-care status quo, and the status quo now is Obamacare absent sustainable funding mechanisms. And if the last decade has demonstrated anything, it is that the political environment does not favor health care’s reformers

Meanwhile, Democrats have abandoned Barack Obama’s health-care-reform law in favor of radical reforms. A variety of Democratic Party presidential aspirants, including Sens. Kirsten Gillibrand, Cory Booker, Elizabeth Warren, and Kamala Harris, have endorsed a single-payer health-care system in the form of universal Medicare. Those Democrats who aren’t outright embracing the nationalization of the health insurance industry are toying with the idea of simply expanding Medicare and Medicaid. None of them have wrestled with the problems associated with creating a sustainable risk pool, financing this exorbitant venture, or overcoming the resistance to this dramatic expansion of governmental influence over a $900 billion annual industry. That debate is coming, but it will have to wait for the general election. Democratic primary voters just aren’t interested in the details.

Fortunately for Democrats, President Donald Trump has stepped in to save them from themselves. Not only is his administration now arguing that the ACA is unconstitutional, putting the law in renewed legal jeopardy, but he’s also committed to transforming the GOP into “the party of healthcare.”

“The premiums cost too much, the deductible is horrible,” Trump said in an extemporaneous Oval Office riff. “If the Supreme Court rules that Obamacare is out, we will have a plan that is far better than Obamacare.” That sounds great! There’s just one problem: The GOP does not have a replacement plan, and the work of crafting one, much less pitching it to voters, is going to split the party and put Republican incumbents on the backfoot.

Even House Minority Leader Kevin McCarthy, not one to create distance between himself and the president, has forsaken the Trump here. According to Axios, McCarthy phoned the president on Wednesday to tell him in no uncertain terms that he has committed the GOP to a doomed course. There is no replacement plan, and there will not be one anytime soon. If the courts struck down the ACA, moreover, Republicans would get the blame when Obamacare’s insurance exchanges and the state-level Medicaid expansion it facilitated disappeared.

Health-care voters favor Democrats, and the Democratic Party successfully positioned itself as Obamacare’s chief advocate in 2018, which likely contributed to Democratic victories at the polls. The Trump administration’s move against Obamacare has sacrificed the advantage associated with its defense of even a suboptimal status quo. If both parties are running on a message of health-care reform, the advantage goes to Democrats.

It’s not entirely clear why Trump took this course of action when he did—basking as he was in the glow of an exculpatory memo summarizing the findings of Robert Mueller’s probe into the 2016 election. But it could just be because he’s Donald Trump, and Donald Trump has never been one for prudence, circumspection, or consideration for his political allies. Why did Trump say the GOP will have a new health-care-reform plan by 2020? Probably because it just felt good to say it. If history is any guide, this won’t be the last time Trump opens his mouth and forces Republicans into a cul-de-sac. 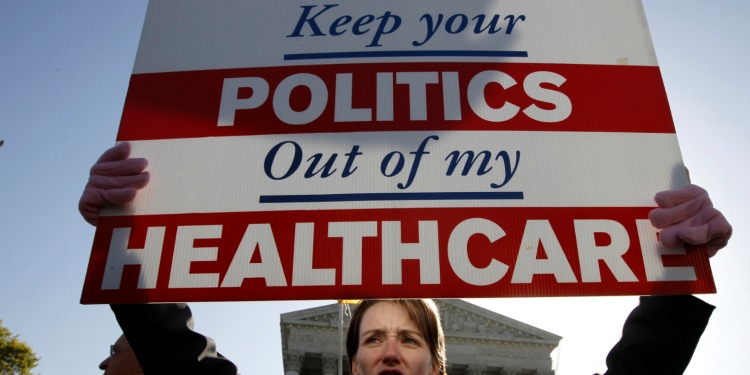