The occasion of an American president congratulating Turkey’s Islamist autocrat on a plebiscite that failed to meet international election standards and that yielded to him near absolute powers is a shameful moment in U.S. history. Donald Trump ran on an agenda of American retrenchment and introversion, and he doesn’t have much use for a “freedom agenda.” Nor, however, is Trump cut in precisely the same mold as his reactionary, paleo-realist core supporters who see the world in purely transactional terms. It’s hard to say what Trump’s vision for the United States is, but it is surely not one that encourages the aspirations of those who strive to live free.

According to the dubious official tally, Turkish President Recep Tayyip Erdoğan won his referendum on a new Turkish constitution with just over 51 percent of the vote. As Michael Rubin wrote for COMMENTARY, the run-up to the vote was typified by Erdoğan’s security services monopolizing national media, shutting down opposition activities, and arresting at least 117 anti- Erdoğan petitioners. According to Organization for Security and Cooperation in Europe (OSCE) observers, Turkish officials violated Turkish election law when they made a last-minute decision to accept ballots that were not officially stamped while the voting was already underway. Despite threats, intimidation, and an apparently rigged system, nearly 49 percent of Turkey’s referendum voters still said “no.”

Erdoğan has already provided extraordinary emergency authority to police following last summer’s failed coup—an event that allowed him to purge Turkey’s military of its remaining secularist elements and focus the nation on the influence of Erdoğan’s enemies abroad. When the referendum goes into effect, Turkey’s president will be able to rule virtually by decree. The post of prime minister will be abolished. The president will be able to choose his ministers and vice presidents, and they will be immune from prosecution. There will be no confirmation process. The new constitution gives the president and parliament equally shared power to appoint representatives to the body that selects the nation’s prosecutors and judges. Parliament will be unable to undertake any investigation into the behavior of the chief executive or his subordinates.

This isn’t anything an American president should be thrilled about. Yet, Trump took the opportunity to personally congratulate Erdoğan on his “victory,” while reportedly raising no concerns about the vote’s validity, before getting down to more substantive matters regarding Turkish-American cooperation in Syria.

This is a dereliction of an American president’s duty to posterity and tradition. American leaders ought to be champions of liberty, particularly when it is under threat. Those who fancy themselves pragmatists might find the move justified by the need to have a productive working relationship with Ankara, but Turkey’s commitment to its Western ties is a vestigial relic of an era its president would prefer to forget.

Turkish official media has spent the better part of a year blaming the United States for the coup attempt. Erdoğan remains irritated by America’s support for Kurdish militias in Syria and the refusal to extradite Fethullah Gülen (who Ankara blames for fomenting the 2016 coup attempt). The U.S. has already committed soldiers to northern Syria explicitly to “deter” Turkish aggression against Kurdish forces targeting ISIS. Ankara has been implicated in secret dealings with Islamic State radicals and has allowed the migrant crisis in Europe to metastasize.

Erdoğan has not been a solid NATO ally, but he has been a lucrative business partner for the Trump family. “Thank you Prime Minister Erdogan for joining us yesterday to celebrate the launch of #TrumpTowers Istanbul!” exclaimed Ivanka Trump in 2012. “I have a little conflict of interest because I have a major, major building in Istanbul,” Trump told his future campaign chairman Steve Bannon on the latter’s radio program in 2015. Of course, Trump’s former National Security Advisor Mike Flynn was an unregistered foreign agent receiving compensation to serve Erdoğan’s interests while he was the foremost individual responsible for advising the president on threats to U.S. national security.

These personal conflicts of interest cannot be dismissed, but they may also mislead. Trump never truly surrendered his soft spot for the world’s despots, and he has demonstrated no interest in supporting the aspirations of freedom-loving people anywhere beyond America’s borders.

Trump previously praised Erdoğan for his uncompromising response to the coup attempt and asserted that he couldn’t presume to criticize the crackdown on civil liberties in Turkey when the U.S. struggles with its own civil unrest. Trump is unable to find anything of substance to criticize when it comes to Vladimir Putin’s intolerance for dissent or opposition political figures.  The president has overlooked the Venezuelan people, who are presently being shot in the street by their besieged and increasingly autocratic socialist overlords. When Trump pursues military action in Syria—and foreshadows it in North Korea—targeting repressive regimes, he does not make note of their repression. In fact, Trump makes a point to say that his actions are undertaken in pursuit of narrow and immediate American national interests, not humanitarianism or the goal of global democratization.

“The United States supports a set of universal rights,” declared Barack Obama at the outset of the Arab Spring revolts. “Our support for these principles is not a secondary interest.” George W. Bush supported a “forward strategy of freedom” and a “mission to promote liberty around the world.” “We know that abroad we have the responsibility to advance freedom and democracy,” Bill Clinton averred. Even if sometimes it was merely lip service, U.S. presidents dating back to the turn of the 20th century acknowledged America’s obligation to defend freedom. No president since America emerged as a global power has so rejected the country’s role as defender of the liberties that God granted all mankind. That’s historically unique and, for those unfortunate enough not to be born into freedom, tragic. 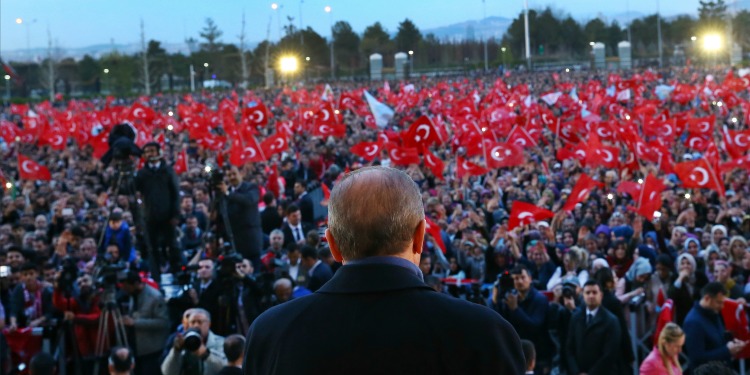