When skeptical conservatives tried to communicate to their Republican brethren their objections to Donald Trump’s candidacy, they would explain that their apprehensions were often definitional. Trump seemed to have little use for or understanding of conservatism, they’d say. His nomination to lead the country’s conservative party would likely sap the already poorly understood philosophy of any universal meaning. What’s more, “conservatism” cast in the mold of Trump’s proudly transgressive racial politics would undermine the GOP’s efforts to appeal to a broad array of Americans. Trump’s election seemed to allay these anxieties temporarily, but the damage being done to the Republican Party’s foundational arguments is still real. Indeed, that damage is more insidious now as Trump’s racial politics transcends the theoretical and becomes manifest in policy with real-world consequences.

The late-Friday-night pardoning of former Maricopa County Sheriff Joe Arpaio has the potential to reverberate in a way few Republicans are able to envision. This decision’s controversial nature was evident in its timing: the eve of a headline-dominating natural disaster. The same can be said for Donald Trump’s decision to sign a rule banning the future enlistment of transgender servicemen and women in the military. Republicans may want to dismiss the Sturm und Drang that followed Arapio’s pardoning as the gnashing of teeth typical of the culture wars. It’s not. It’s something bigger.

Writing in USA Today, Arpaio’s former Arizona constituent and Ricochet’s editor-in-chief, Jon Gabriel, outlines the litany of ways in which the boastfully draconian sheriff flouted the law he was supposedly so concerned with upholding. Gabriel recalls the “sweeps” targeting brown-skinned residents in search of those who illegally crossed the border. He details the oppressive police presence permanently entrenched in Hispanic communities. He observes how Arpaio improperly cleared alleged sex crimes, arrested journalists (at great cost to taxpayers following civil adjudication), and intimidated the family members of his political opponents. From concocting a false assassination attempt to overseeing a department that allegedly set a suspect’s dog on fire; Arpaio’s refusal to abide by a court order preventing him from violating the 4th and 14th Amendment rights of Hispanics was, Gabriel concludes, “merely the tip of the iceberg.”

“By pardoning Arpaio, Trump made it clear that institutional racism is not just OK with him. It is a goal,” wrote the editorial board of Arizona’s largest newspaper, The Republic. Republicans would dismiss this assertion at their peril.

For years, conservatives have had the stronger argument when confronted with the liberal contention that America is disfigured by the corruption of “institutional racism.” At a time in which America was the only nation in the Western world to have elevated a person of African descent to head of state, proponents of the idea that the United States was defined by its lingering systemic racial prejudice was a hard case to make. The left argued that institutional racial discrimination was subcutaneous and its practitioners signaled their fealty to racial oppression by speaking to one another in code (a secret language that, somehow, their critics seemed more adept at deciphering than even the subjects of their criticism).

Those without a complex and developed racial consciousness were unable to see this pervasive, vestigial racism, and that earned them a scolding from their more enlightened liberal evaluators. But this display of puffery fooled only those inclined toward learning the secret liberal handshake and acquiring the status it confers. This expansive definition of racism popular in academe was exposed as nonsense the minute its adherents encountered the real thing.

The racist slurs directed at an African-American student at the University of Missouri’s flagship campus that sparked months of protests in 2015 and resulted in the resignation of the university system’s president is illustrative. “I’d had experience with racism before, like microaggressions, but that was the first time I’d experienced in-your-face racism,” said one target of racism. “There was a silence that fell over us all, almost in disbelief that this racial slur, in particular, was used in our vicinity,” another averred. This experience was so traumatic because it was unique.

Moreover, when genuine systemic racism was uncovered—for example, when the Justice Department’s Civil Rights Division cited the Ferguson, Missouri, police department for using its African-American residents like automatic teller machines—its isolation and adjudication by proper officials put the scope of the problem in perspective.

Arpaio’s pardon is different. This isn’t a righteous stab at “political correctness.” It’s the real thing: institutional racism executed by law enforcement and, now, sanctioned by the President of the United States. This is no dog whistle. It’s a foghorn.

It doesn’t take a racial decoder ring to see how the Trump administration is lending veracity to the pervasive liberal notion that the GOP is the party most amendable to discrimination. More disturbing for conservatives, this administration’s legacy could amount to lending veracity to the arguments of those who seek to tar boilerplate conservatism with the stain of bigotry.

For example, those who want to poison the public against the Justice Department’s investigation into prima facie valid claims that affirmative-action guidelines at universities disadvantage Asian-American applicants have a compelling new argument to make. Liberals who support positive racial discrimination can base their challenge to reforms on their opposition to the administration alone and probably win converts in the process. Conservatives spent decades arguing that discriminatory policies like these are ethically repugnant. The Party of Trump has far less moral standing to argue the point.

Conservatives dedicated a lot of energy to combating the popular racial paranoia that gripped the left in this decade. The United States is not the same country it was in 1965, and conservatives who argued as much had the facts on their side. In the era of white identity politics, the GOP is ceding the argument to the left. Its predictability only compounds this tragedy. 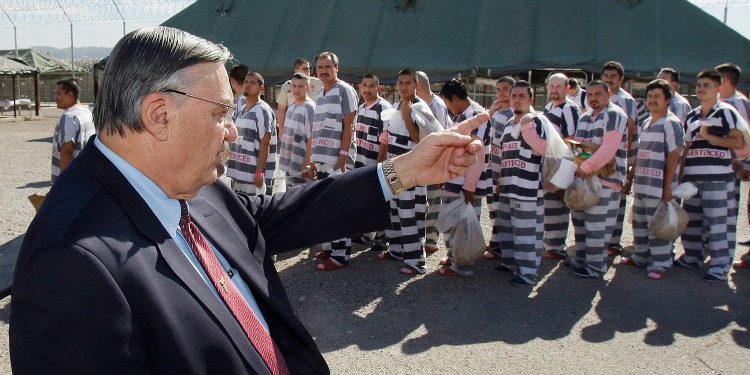