When proponents of American retrenchment advocate disengagement from a chaotic and hostile world, they often lament how little responsibility the globe’s non-NATO powers take for safeguarding their own security. But amid six years of sustained retrenchment, a variety of state actors have, in fact, begun to display the will to secure their backyards. Russia has invaded Ukraine, Egypt and the U.A.E. are conducting airstrikes over Libya, and a Saudi-led coalition of 10 Sunni Arab states are degrading an Iran-backed insurgency in Yemen from the air. Unsurprisingly, you don’t hear many of the champions of Western withdrawal touting the fruits of this policy preference. If reports are right, another pillar of the Pax Americana is about to fall, and it will be an erstwhile American ally that pulls it down.

As the conflict in Syria grows increasingly chaotic, with battle lines shifting wildly and Islamic State forces surging back into the previously cleared city of Kobane, the Turkish National Security Council met on Monday to discuss extraordinary measures to address the rapidly deteriorating security situation. “President Recep Tayyip Erdoğan has authorised a change in the rules of engagement previously agreed by the Turkish parliament to allow the army to strike at Islamic State of Iraq and the Levant, as well as the Assad regime,” the Telegraph revealed. But Erdoğan’s true targets aren’t Syrian Islamists or the regime in Damascus that has already attacked and destroyed Turkish military assets; it’s the West’s only reliable anti-ISIS ground force in the region, the Kurds.

“I am saying this to the whole world: We will never allow the establishment of a state on our southern border in the north of Syria,” the Turkish president vowed on Friday. “We will continue our fight in that respect whatever the cost may be.” The speech, in which Erdoğan alleged that Syrian Kurds were engaged in ethnic cleansing, signaled an end to Turkey’s brief flirtation with the prospect of an independent Kurdistan.

Ankara’s proposal consists of a limited invasion of Northern Syria to establish a “110-km long (70-mile), 33-km deep (20-mile) buffer zone” along the border with Turkey that will prevent both ISIS and Kurdish incursions. The Financial Times further alleges that Turkey will be joined in their invasion of Syria by Jordan, which will invade from the south and establish their own safe zone stretching across the “provinces of Deraa and Suwayda, and including the city of Deraa.”

Naturally, Obama administration officials displayed their typical insouciance about the prospect of the further degradation of the international order in the Middle East.

“Later on Monday, the State Department said the United States has no ‘solid evidence’ that Jordan and Turkey are considering seeking a buffer zone in Syria,” Haaretz revealed. “State Department spokesman Mark Toner said there were ‘serious logistical challenges’ in creating such buffer zones but he had not seen any concrete evidence either Jordan or Turkey were considering such a zone.”

But this dismissal sounds similar to those voices of moderation who once insisted that the Saudis lacked the military means to engage in sustained combat operations against the Houthi rebels in Yemen right up until the minute the bombs started falling. While theirs was an accurate assessment of Saudi military capabilities, it was a gross underestimation of the scale of the threat posed by pro-Iranian proxies in control of Aden and the Bab-el-Mandeb Strait as seen from Riyadh’s perspective. Likewise, the risks associated with an invasion of the virtual failed state of Syria might seem like they are not worth the rewards when viewed from Washington, but the same calculation made in Ankara and Amman appears to be yielding a different result.

“Twenty five percent of Turkey’s population is Kurdish, and Erdoğan —like most of his ethnic Turkish countrymen—are terrified that Turkey may lose a huge swath of its territory if Syrian Kurdistan liberates itself alongside Iraqi Kurdistan. Turkish Kurdistan could very well be the next domino,” the World Affairs Journal’s Michael Totten observed. “They are not crazy to fear this.”

It’s also clear and has been for some time that ostensibly NATO-allied Turkey does not view ISIS as an existential threat. As Michael Rubin noted, Erdoğan’s sympathy for ISIS is matched only by his antipathy toward the Kurds. “Like Atatürk, Erdoğan is perfectly happy to embrace Kurds so long as they abandon their ethnic identity,” he wrote. But the Kurdish campaign against ISIS in Iraq and Syria that has demonstrated that they are among the more capable fighting forces in the region, and that realization has yielded a boost in Kurdish nationalistic identity and self-confidence. That, apparently, cannot be allowed to stand.

Indeed, the very impetus for a Turkish invasion of Syria is the efficacy of Kurdish fighting forces. “In a telephone interview, [the London-based RUSI think tank fellow Aaron] Stein said the new talk of action was due in part to dramatic Kurdish gains in Syria, where rebels have scored a series of victories against IS, most notably in the border town of Tal Abyad,” the Associated Press reported. “That key transit point is not far from the IS’s Syrian power base of Raqqa.”

A Turkish invasion of northern Syria could advance American interests by depriving Islamist militants of access to the border and the access to the West that it once enjoyed. It will also, however, place the United States one step closer to being drawn directly into a messy conflict in Syria. Within two years of Barack Obama’s decision to abandon the “red line” for action in Syria that he set, the region is fully ablaze with more conflicts smoldering on the horizon. For advocates of retrenchment, however, there will likely be no evidence that forces them to reconsider their convictions. 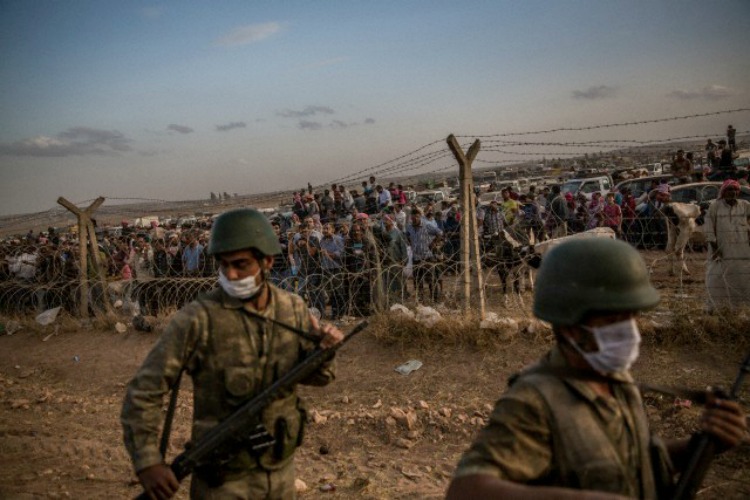