Among an influential cast of liberal opinion leaders, Republican criticisms of Barack Obama’s prime-time address can only be taken seriously if they also laud the president in some form or fashion. Well then, let’s give them what they want.

The President of the United States finally – finally — acknowledged the domestic threat posed by radical Islamic terrorism directed or inspired by militant organizations overseas. After terrorist attacks attempted or executed by radicalized fundamentalist Muslims in Fort Hood, Time Square, Boston, Garland, Texas, and San Bernardino, California, the president is at last coming to terms with this menace. To his credit, Obama finally acknowledged Major Nidal Hasan’s murder spree was an act of Islamic terrorism. He also noted that the killing of five at a U.S. Navy recruiting center in Chattanooga, Tennessee, was inspired by the same murderous ideology. Only three weeks ago, the FBI had contended that we might never know what inspired Muhammad Youssef Abdulazeez, who was described as a devout Muslim, to target American soldiers for death. Finally, Obama noted that the sophisticated attack in California was the work of radicalized Muslims inspired by the Islamic State, but only belatedly and following the lead of his FBI director. If that sounds like damnation with faint praise, it should.

Obama delivered two speeches last night. The first was a remarkably discordant dissertation on the present and growing threat of radical Islamic militancy, which he averred could be mitigated if only we remain on the same course that allowed this threat to thrive. The second, a much more impassioned address, focused exclusively on his favorite subject: the boorish and unenlightened American people, who are in desperate need of a lecture.

When Obama became enthusiastic, it was when he was explaining what we should not do. The president asserted that a 2003-style invasion of the Islamic State’s territory in Iraq and Syria would be the wrong course, as though anyone had suggested it isn’t. Barack Obama insisted that to send over a hundred thousand troops to invade and occupy this territory would only “draw new recruits” for ISIS, which is a popular argument on the left. It is also one that lends undue credence to ISIS’s fevered end of days fantasy. It’s more likely that ISIS is better able to recruit not as a result of battlefield setbacks on its home turf, but by exporting terrorism overseas and slaughtering nearly 1,000 civilians in the space of just over a year.

Still, the president acknowledged, as do most serious presidential candidates on both sides of the aisle, that an Iraqi and Syrian ground force (read: Sunni) is the only force that can roll back ISIS and fill the ensuing vacuum. He did, however, contradict himself by contending that he will seek “a political resolution to the Syrian war” that assuages the concerns of countries like Russia. But Moscow’s primary concern is in ensuring that Bashar al-Assad remains in power. We might like to tell ourselves that peace can be won around a negotiating table, but too much blood has been spilled for that now. A political resolution that leaves Assad in power will etch the animosities of the Syrian Civil War in stone. As long as Assad remains in control in Damascus, it is unlikely the hostilities that inspired so many Sunnis around the region to flood into Syria to fight against his regime will ever abate.

These were Obama’s counter-terror proposals. From there, he launched into a familiar homily about American intolerance. The president sought to stave off a backlash against Muslim Americans, which has never materialized on a grand scale over the course of the 14 years that elapsed since 9/11. That does not mean it never will, and it is the president who is inviting such a backlash by allowing the terrorist threat overseas to metastasize and erode Americans’ sense of security at home. People are afraid now, and Obama knows it. Indeed, the only discernable purpose of the president’s speech was to inspire the public’s confidence in their commander-in-chief. That is a task made more difficult by the fact that the only policy proposal Obama backed which might have addressed the conditions that led to the attack in California was to review the visa waiver program that allowed one of these two attackers to settle inside the United States. Except that one of the two attackers didn’t come to the United States as a result of the visa waiver program but on a fiancé visa. The White House corrected the error after the speech was delivered, but one wonder’s how Obama’s speech writers flubbed it in the first place if their focus is truly on preventing future attacks.

While shifting some of the public’s anxiety onto congressional shoulders, Obama made a handful of demands on American lawmakers. He insisted that Congress pass a new authorization for the use of military force tailored to this unique threat, which isn’t a bad idea. A new AUMF might not bind this president to any course of action, but it will focus the next president on the task at hand. Those who oppose a new AUMF do so, however, for good reason; it was a sticking point Obama himself identified. “Our military will continue to hunt down terrorist plotters in any country where it is necessary,” Obama noted. For the moment, the theater of operations ranges from the Tajikistan border to the shores of Nigeria, and from the Azerbaijan to the Gulf of Aden — not to mention terror cells in non-Islamic countries around the world. Does Obama want Congress to pass a global AUMF?

Lastly, the president indulged the hysteria overtaking the left on the matter of guns by insisting that the GOP should pass a partisan Democratic proposal to prevent those on the terrorist watch list from purchasing a gun. “What could possibly be the argument for allowing a terrorist suspect to buy a semi-automatic weapon?” he asked. For starters, the deprivation of a constitutional right for American citizens on American soil should, and must, require the application of due process and a formal indictment. A former constitutional law professor, Obama knows this proposal would die an ignominious death in the courts. In fact, its primary value seems to be in the fact that Republicans won’t pass it, as Democrats would not and for the same reasons when it was first floated in 2007.

Missing from Obama’s speech was any mention of the threat of the competing organizational theory of fundamentalist Islam. Without an acknowledgment of the ideology catalyzing this violence, it cannot be stopped. Imagine for a moment if, during the Cold War, Western leaders obsessively repeated the refrain that Soviet-style communism did not represent Marxism, and Marxists everywhere had a duty to denounce it. Like socialism then, no responsible Western leader would contend that the religion of Islam is itself a threat that cannot coexist with the West. Those who do are appropriately ostracized. But a competing ideology cannot be fought without first being defined. Its dissidents cannot be identified; its tenets cannot be discredited; its adherents cannot be recognized and isolated.

Obama’s address contained few new proposals and virtually no strategic pivots. It was primarily an unconvincing effort to assure the public that the present disastrous course is the correct one, and also that they should resist the temptation to indulge in violent bigotry. One wonder’s what the point of this speech was beyond reminding Americans that the Obama presidency is an utterly spent force. 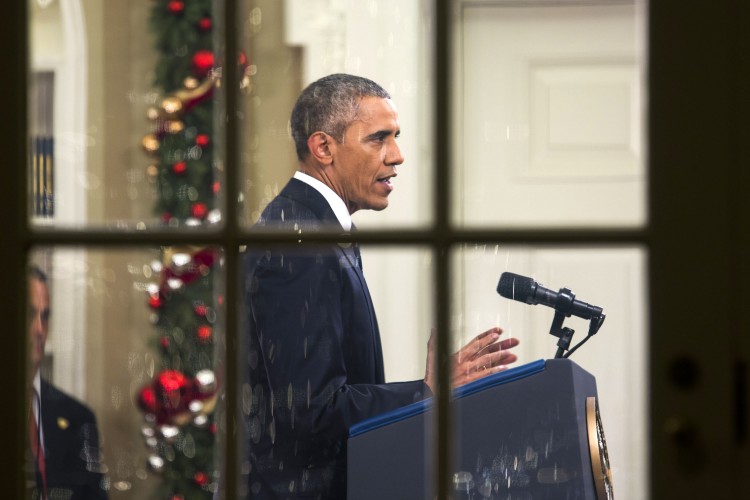