Fox News Channel host Tucker Carlson asked a question on Tuesday night that merits thorough examination and an honest response. The one he received from his interlocutor, Retired Lieutenant Colonel Ralph Peters, was entirely insufficient.

“How many wars can we fight at once?” asked Carlson with palpable weariness. The question arose during a discussion of President Donald Trump’s desire to seek rapprochement with Russia. Though Carlson declined to mount a defense of Russian President Vladimir Putin’s character or behavior in office, he wondered whether the United States wouldn’t be better served by nevertheless partnering with “bad people [who] have similar interests,” in Syria in particular. For asking this question, the premise of which is genuinely held by millions of patriotic Americans, Carlson was accused by Peters of sounding like the Nazi-sympathizing isolationists of the 1930s.

Carlson bristled with indignation over the attack on his character, and the conversation fell off a cliff. Carlson’s premise is, however, worthy of a dispassionate and comprehensive response. “Why does it contravene American interests to make common cause with a group that is trying to kill ISIS?” the Fox host asked. The answer to his question is simple: It does not. The problem is that Carlson’s is not an accurate description of Russia’s behavior in Syria.

In September of 2015, as the Bashar al-Assad regime teetered and with army reserves depleting rapidly, Russia intervened militarily on its vassal’s behalf. Moscow claimed it was unilaterally joining the global coalition to combat ISIS, but its interest was only in saving Assad and, by extension, Russia’s last port on the Mediterranean at Tartus. Moscow focused not on striking ISIS targets but on anti-regime rebels trained by the Central Intelligence Agency.

Russia even struck CIA-provided weapons depots in Syria, revealing to the world for the first time the extent of the U.S. government’s covert efforts to unseat the genocidal, WMD-deploying dictator in Damascus. Russian attacks on the bases where U.S and British Special Forces train indigenous soldiers continued well into 2016. As recently as March, Russian jets bombed a town in which coalition forces were operating—and just a few kilometers away from where U.S. special forces were stationed.

Russia’s conduct in Syria has been deplorable. Their every effort has been expended to actively preserve the integrity of a regime that is alleged to have deployed chemical weapons on civilians, that executes women and children en masse, uses rape as a weapon of war, and organizes starvation campaigns targeting whole cities. The United States has confirmed that its intelligence indicates Russia was aware of Syria’s preparations to deploy nerve agents on civilian targets in April. Following that attack, a Russian-made warplane bombed the hospital in which gas victims were receiving treatment, an operation the U.S. believes was designed to cover up the massacre. Russia is credibly alleged to have used cluster bombs, incendiary munitions, and white phosphorous in violation of international law.

Russia rarely executes any strikes on ISIS targets. Why should they? The regime they are defending has little interest in neutralizing the ISIS threat entirely. “Oil and gas sales to Mr. Assad’s regime are now Islamic State’s largest source of funds,” the Wall Street Journal reported in January. This follows a pattern; Assad looked the other way when Islamist terror groups began coalescing into the organization that became ISIS because he assumed such groups would shock and scare the West out of intervening in the conflict. He was correct. Both Moscow and Damascus continue to view ISIS as a useful entity that allows them to frame the conflict as one between the forces of civilization and savagery.

As the ISIS “caliphate” implodes, the regime has taken to mounting a kinetic defense of the Islamist terror network’s strongholds. In June, a U.S. Navy fighter shot down a Syrian warplane when that bomber executed airstrikes on U.S.-backed forces laying siege to the suburbs of ISIS’s de facto capital, Raqqa. Russia responded to that attack on their ally not with apologies for interfering in the campaign against terrorists they claim to support but by threatening to target any NATO assets that cross the western bank of the Euphrates River.

These conflicting interests are intractable. They are why a series of jointly negotiated ceasefires have failed and why the limited cessation of hostilities in Syria’s south, agreed to by Russian and American officials at the G20 summit last week, is doomed to follow a similar course. Iran and its proxies—another set of disreputable Russian allies—are mounting an increasingly aggressive campaign against U.S. forces near Syria’s border with Jordan and Iraq. The ceasefire was broken this week by regime-aligned forces and Iranian-backed rebels.

To cooperate with Russia in any effort to impose peace in Syria, such as jointly-monitored “safe zones,” is to be complicit in the regime’s crimes. As long as the Assad regime is in power, there will be a Sunni-dominated insurgency against his regime. To ally with Russia in Syria is to align with rogues like Assad, Hezbollah, and the Islamist radicals they claim to oppose. That would create a schism between the U.S. and the Sunni actors (both sovereign and non-state), relationships that are already strained as a result of the Obama administration’s overtures toward Iran. Those are unacceptable moral compromises that are not justified by any rational strategic consideration.

The kind of cooperative relationship the U.S. and Russia can navigate is the one in which they are presently involved—the kind typified by mechanisms designed to keep one another apart and to de-escalate conflicts should they arise. That means post-ISIS Syria will be characterized by some kind of soft partition. This is hardly an optimal outcome, but more palatable alternatives have been precluded by seven years of war.

To millions of Americans, Syria is a charnel house best left alone. Those Americans are wrong. The fact is that the sorry state of affairs in the Levant is largely a result of America’s efforts to extricate itself from the region under Donald Trump’s predecessor. The notion that the U.S. should, or even can, partner with Russia in Syria now is a dangerous fantasy. The president is better served when those who wish his presidency to succeed decline to reinforce his preconceptions, particularly those founded in ignorance. 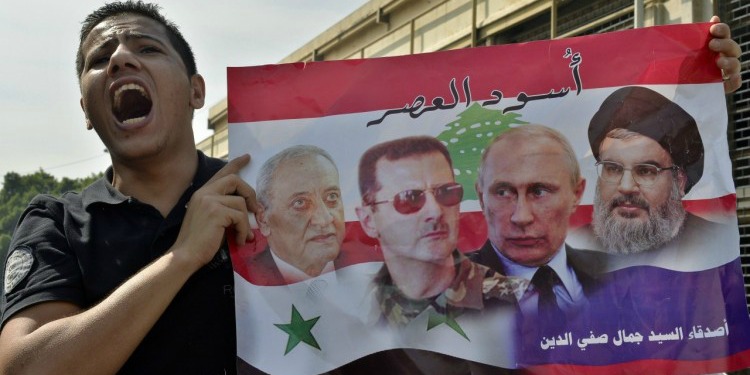