Barack Obama was right. Though, in this case, he almost certainly wishes he weren’t.

In what historians may come to regard as the most pivotal speech of Obama’s presidency, on the evening of September 10, 2013, the president addressed a nervous and war-weary nation during prime time. In that speech, he explained to the American people why the United States must use military force to punish Bashar al-Assad for deploying chemical weapons in his nation’s civil war.

“If we fail to act,” Obama warned, “the Assad regime will see no reason to stop using chemical weapons. As the ban against these weapons erodes, other tyrants will have no reason to think twice about acquiring poison gas and using them. Over time, our troops would again face the prospect of chemical warfare on the battlefield. And it could be easier for terrorist organizations to obtain these weapons, and to use them to attack civilians.”

This week, the Pentagon revealed that Iraqi soldiers and U.S. troops were believed to have come under chemical attack by ISIS. No U.S. troops were injured in the shelling attack on an Iraqi airbase, nor did anyone display symptoms associated with poisoning by mustard gas—the agent one test concluded was present on a recovered shell. What’s more, sources that spoke with reporters suggested that the chemical agent was of poor quality and may have been manufactured by ISIS rather than confiscated from Assad’s stockpiles.

This attack on the coalition forces advancing on occupied Mosul should come as no surprise to anyone who has monitored events in the ongoing war against the terrorist caliphate in the Middle East. Over a year ago, Kurdish militants were believed to have come under chemical attack by ISIS insurgents inside Syria. That attack, which utilized chlorine and mustard gas, yielded a series of horrific images evocative of the horrors that characterized trench warfare in the fields of Europe at the start of the last century. What that attack did not produce, however, was any sense of revulsion in the West over the terrible new normal ushered in by Obama’s failure to act in 2013.

Obama’s prime-time address will come to be regarded as grimly portentious not because of what he warned but because of how he disregarded his own advice. The second half of that speech was a lawyerly evasion in which he simultaneously contended that he could not act to punish Assad without Congress’s consent (consent he did not need to act in Syria one year later) and that our friendly partners in Moscow would resolve the whole affair peacefully anyway. Obama was determined not to enforce the “red line” he himself had drawn and which was so brazenly violated by Assad’s forces. Another war, even one “unbelievably small” and “just muscular enough not to get mocked,” was unpopular both at home and among America’s allies. In abdicating his role as commander in deference to public opinion, however, Obama ushered in the dark future he warned Americans would follow American inaction.

Unfortunately, the terrible warnings in Obama’s speech have only just begun to materialize. American forces are the equivalent of the globe’s first responders, and the eroding of the prohibitions on the use of chemical weapons in warfare is an immediate threat to them. There will come a time in the not so distant future when U.S. troops will be deployed to a chemical battlefield. That battlefield may even be Syria. Despite pledges by Damascus to surrender its chemical stockpiles under Russia’s benevolent gaze, Assad is still using chemical weapons against rebel and civilian targets. As recently as September 6, rebel-held areas of the besieged city of Aleppo were targeted with chlorine gas by Assad’s forces. There will be more attacks, and more searing images of twisted bodies, frothing mouths, children contorted and terrified with their horrible final moments forever etched on their lifeless faces.

Americans have not yet begun to fully comprehend the scale of the error in Obama’s decision to rescind his threat to enforce century-old norms prohibiting the use of unconventional weapons in warfare. The next president will have to clean up after his mess, but history will not forget who it was that made it. 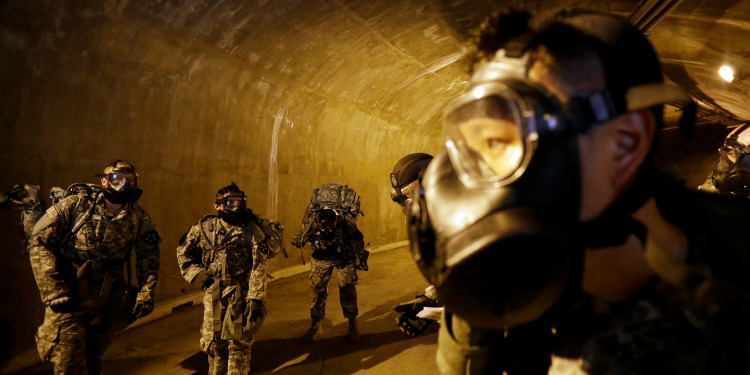