We have developed the bad habit of demarcating the beginning of European Communism’s implosion by citing “the fall of the Berlin Wall.” The Berlin Wall didn’t “fall.” It was beaten with hammers, sliced through with reinforced circular saws, pulled apart by earth movers and, eventually, dismantled by cranes in one of the German Democratic Republic’s final acts. We have chosen to describe the rebellion that liberated hundreds of millions of people passively, but the Wall did not “collapse.” This was the righteous act of an aggrieved people who wagered their own security in the pursuit of freedom.

While we’re on the subject of linguistic cowardice, it’s worth dwelling on the confused definitions behind which political carnival barkers seek refuge. To today’s radicals, “socialism” is a collection of vague moralist ideas: progressive welfare-state programs, environmental remediation, reparative racial justice, and a buffet of sentimental nostrums about communitarian spirit. It’s anything and everything but what socialism is: the public ownership of the economy’s commanding heights.

Hackneyed mawkishness and eschatological prophesies about this or the other dire societal condition are often accompanied by genuinely socialist economic prescriptions, but they are not themselves socialism. There is a reason why socialism’s advocates wear these masks. Everywhere that state ownership of capital is applied in the effort to crowd private enterprise out of society, it has produced misery and violence.

That violence begins with the state. It is the violence that suppresses dissent and transforms neighbors into informants, but that violence produces a reciprocal response from the oppressed. We’re now witnessing this familiar drama unfold in Venezuela, where violent revolutionary sentiments have periodically exploded and been ruthlessly suppressed for the better part of this decade.

The late Venezuelan President Hugo Chavez spent a decade nationalizing the means of production in the name of his socialist Revolutionary Bolivarian Movement. He expropriated privately owned oil exploration and production facilities and implemented onerous “windfall” taxes on foreign petroleum producers. He seized agricultural firms, fertilizer producers, livestock and rice operations, and land Caracas arbitrarily deemed “unproductive.” He nationalized much of the financial services industry in Venezuela, closing dozens of small and mid-size banks that did not lend at rates dictated by the government. Cement factories, glass makers, steel mills, the gold industry, telecommunications, transportation, power and electricity generation, and even tourist destinations were all subsumed under the control of the state.

The inevitable fruits of command economics—shortages, rationing, political dysfunction, and terror—were a feature of life in Venezuela even before Chavez’s death in 2013, but they intensified under his successor, Nicolas Maduro. Rates of murder and violent crime in Venezuela exploded. Narcotics trafficking is a way of life for civilians and members of the military alike. Rolling blackouts were and remain a near-daily experience. Running water is a luxury. Basic goods and amenities are scarce. Food and medicine are rationed, where they can be found at all. Preventable diseases like malaria, measles, and diphtheria are common. People started to flee with their families for the safety and security of stable market economies. And then the political violence began.

As the Maduro government’s popularity waned, it’s willingness to crack down on political dissent increased. Opposition figures and members of the military were arrested or murdered. Student-led anti-government protests were met with violence. Mass demonstrations that followed these spasms of occasionally riotous dissent were met with similar displays of state-sponsored bloodshed.

Of course, Maduro’s grip on power required the subversion of the rule of law. He purged the military of dissenting elements and directed Venezuela’s loyalist Supreme Court to strip the elected National Assembly of its legislative authority, vesting unconstitutional power in the country’s socialist president. In the attempt to remedy that legitimacy problem, the Maduro regime simply rewrote the constitution and created an alternative, parallel legislature composed of regime supporters—a measure that was approved in a national plebiscite that was anything but free and democratic. By the time the Trump administration laudably acknowledged the National Assembly leader Juan Guaidó’s interim assumption of presidential authority, legal arguments against this broadly popular maneuver had been decimated by the Maduro regime’s efforts to maintain power even at the cost of its legitimacy.

Which brings us back to word games. The failure of socialism in practice is particularly frustrating for those who have nominally hitched themselves to the socialist wagon. The redistribution of incomes and the state’s influence over market signals has everywhere failed to achieve its desired aims, and it necessitates oppression and violence when the people it fails begin to notice their worsening lots. That’s inconvenient if you’re a “Democratic Socialist.” 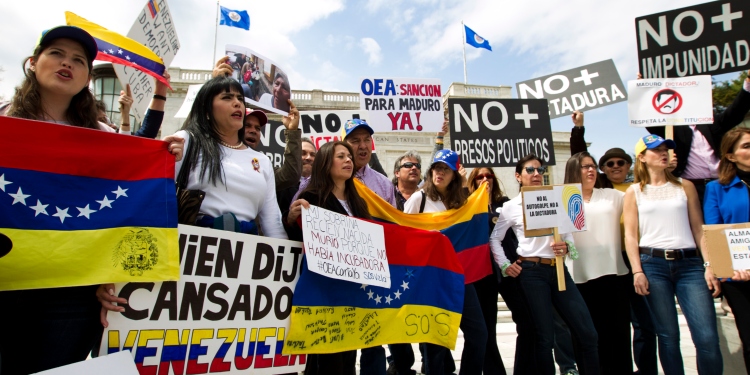