America is lurching toward a civic crisis. The symptoms are most evident in America’s youth who, in their rash intemperance, are apt to say aloud what their elders are clever enough to imply. Subtly or overtly, the message is the same: Violence is coming.

The Washington Post’s Catherine Rampell provides only the latest evidence that the next generation is eagerly discarding the standards of civil decency that have kept us from lunging at each other’s throats. She reports on a a survey of undergraduate college students at four-year colleges, conducted by University of California, Los Angeles professor and Brookings Institution Fellow John Villasenor and funded by the Charles Koch Foundation, that offers no reason for optimism.

The survey found that a plurality of students, 44 percent, believe the First Amendment does not protect “hate speech,” whatever that is. It revealed that a majority—51 percent—believe it is acceptable to shout down and drown out “a very controversial speaker” who is “known for making offensive and hurtful statements.” The definitions of controversial, hurtful, and offensive are subjective. Understanding that, however, is indicative of a bygone era when one utilized self-awareness to prevent even the most censorious Americans from overreaching. Finally, and most disturbing, the survey revealed that nearly one-fifth of college students believe it is acceptable to engage in violence to silence a speaker with whom they disagreed.

These sentiments are not novel. A 2015 survey by the Higher Education Research Institute at UCLA found that 71 percent of freshmen believed that colleges should “prohibit racist/sexist speech” and 43 percent of incoming freshmen agreed colleges should “have the right to ban extreme speakers.” Those ideas trickle down. A 2011 poll of faculty conducted by that institution revealed that nearly 70 percent of female college staff and almost half of their male counterparts thought universities should “prohibit” speech deemed racist or sexist.

“Here’s the problem with suggesting that upsetting speech warrants ‘safe spaces,’ or otherwise conflating mere words with physical assault: If speech is violence, then violence becomes a justifiable response to speech,” Rampell writes. Indeed, this observation has been proposed by those who have watched the storm clouds on the horizon for years now (cough). Rampell should, however, not limit her critique to colleges. These authoritarian ideas didn’t dawn on these teenagers like an epiphany ex nihilo. They were imparted.

In the modern age, the intellectual foundations needed to transform even murderous violence as an understandable, if not entirely acceptable, response to provocation were laid years ago by a frustrated class of activists trapped in ivy-covered cages on campuses. It was an impulse that began to seep out into the national consciousness when the editors and cartoonists of the French satirical magazine Charlie Hebdo were slaughtered by the Islamist terrorists they deliberately offended. We were treated to a series of hand-wringing treatise from earnest liberals lamenting the effects of a society that “perversely” “valorizes free speech for its own sake.”

Even former Secretary of State John Kerry gave credence to this ideal. Following the bloody November 2015 attack on various locations in Paris, Kerry called the violence senseless—unlike the attacks on Charlie Hebdo. The Charlie Hebdo murderers, he said, had “a rationale that you could attach yourself to somehow and say, ‘Okay, they’re really angry because of this and that.’” That same logic can been seen today in the cowardice of adult men and women who scold their young charges for inviting the likes of Milo Yiannopoulos, Ben Shapiro, Ann Coulter, Condoleezza Rice, Christina Hoff Sommers, Ayaan Hirsi Ali, Charles Murray, or any number of pop culture figures, intellectuals, and conservative authors onto campus. Don’t they know they’re just asking for it?

“When someone calls a black person the ‘n’ word out of hatred, he or she is not expressing a new idea or outlining a valuable thought,” read a 2012 editorial in the Harvard Crimson. “They are committing an act of violence.” These sentiments were menacingly echoed by the editors of Wellesley College’s student-run newspaper in 2017. “[I]f people are given the resources to learn and either continue to speak hate speech or refuse to adapt their beliefs, then hostility may be warranted,” they wrote, cryptically advocating “appropriate measures” be brought to bear. These and many other misguided students who have used their right to free speech to advocate its repression are merely observing their elders.

In an April 2017 op-ed for the New York Times, New York University vice provost Ulrich Baer put a thin whitewash over rank anti-intellectualism when he claimed that some speech should be suppressed due to the asymmetry between the speaker and offended student. Appropriating the Holocaust to make his claims, he noted that the unduly derided “snowflakes” who display more sensitivity toward their peers’ discomfort than free speech advocates. Pure free expression, he noted “conflicts with the community’s obligation to assure all of its members equal access to public speech.” For some reason, Baer has convinced himself the right of “minorities to participate in public discourse” is under attack. Given that delusional construct, aggression isn’t just warranted but necessary. Denying offensive speakers a “platform,” e.g., preventing invited speakers form honoring their invitation, is a moral imperative.

On Inauguration Day, as agitators set fires and destroyed storefronts in the name of opposing Donald Trump, one of the alt-right’s most vile agitators—the white supremacist organizer Richard Spencer—was hit in the face. The nation was treated to a fatuous display of special pleading typified by media outlets exploring the virtues of this attack as if assault amounted to a weighty philosophical conundrum. “What are the ethics of punching Nazis?” The Guardian asked. “Is it O.K. to punch a Nazi?” the Times pondered. Nine months later, with white supremacists emboldened by the tense climate and a president conspicuously cautious about offending them, Nazis are still appearing in public and getting punched in the face. Why wouldn’t they be when the authors of this violence are getting pats on the head from their elders?

Wearing a Nazi armband, wrote City University of New York Professor Angus Johnston, is “not just a speech act. It’s a test.” Not a test of civic norms, but of the ability of the onlooker to suppress the subconscious checks on the impulse to lash out violently. “It’s street harassment,” he wrote. He rattled off a variety of other situations in which he thought it was okay to perform an act of preemptive violence, made a rough moral equivalency, and implied that anyone who felt differently is a closeted Nazi sympathizer. Modern academic ethics perfectly crystallized.

This litany focuses on the left because leftists offer more material to parse. Cosseted, well-compensated soft revolutionaries are busy penning hagiography to thugs who commit acts of terror in the name of “anti-fascism.” Respectable left-wing journals like the Nation, Mother Jones, and the New Republic have found themselves in the rank agitation business. Right-wing violence is not imaginary, but the legitimization of it in respectable circles—including, arguably, in the White House—is newer. For example: “Several high-profile rallies transformed into brawls between black-clad Antifa and conservatives who sometimes claimed membership in new anti-Antifa organizations, such as the Fraternal Order of Alt-Knights, a wing of the Proud Boys, itself a group founded by Rebel commentator Gavin McInnes,” the Washington Post’s Dave Weigel reported. We’re not talking about National Review, the Weekly Standard, and the professorate at Hillsdale College.

It is tempting to blame young people, who neither understand nor treasure the enlightened values for which generations of Americans have fought and died. But these young men and women are mimicking illiberalism by example. You have to be carefully taught. 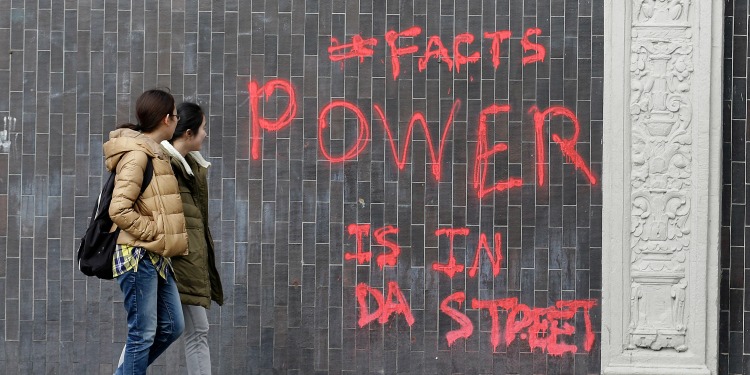