If you thought the public polling was looking grim for Democrats heading into this year’s midterm elections, it’s got nothing on the private polling and focus groups that Democrats are conducting among themselves.

Politico’s analysis of a document summarizing the party’s research is about as bleak as it gets. On cultural issues alone, the Democratic Congressional Campaign Committee found that the GOP’s messaging was “alarmingly potent” because Democrats had become “preachy,” “judgmental,” and “focused on culture wars.” Issues ranging from a progressive effort to “defund the police” to maximalist immigration policies summarized as “open borders and amnesty” repulsed voters to a degree that heralds a political disaster for the Democratic Party in November.

When voters are asked in Democratic surveys which party they’d prefer to see in control of Congress, Democrats trail the GOP by 4 points. But when those voters are primed with Republican messaging around these hot-button cultural issues, the Republican Party’s lead explodes to a staggering 14-point advantage over Democrats. “It wasn’t all bleak, though,” Politico notes. When those same voters are confronted with canned Democratic rebuttals to the GOP’s talking points, the Republican lead in generic ballot polling recedes to just six points.

That’s cold comfort. In 2010, the Republican Party won the national popular vote by 6.8 points over Democrats, which netted the party 63 seats in the House, five seats in the Senate, and five governorships. So, if the election were held today, the range of outcomes is somewhere between a historic landslide victory for the GOP and an unprecedented electoral brushfire that would purge the landscape of any Democrats unfortunate enough to find themselves on the ballot. That’s some bright side.

Politico’s analysis maintains that the party can pull itself out of this tailspin relatively easily. All its members have to do is talk more about their policy preferences, which voters generally favor. If only it was that easy. Democrats have spent the last year waging a culture war not just rhetorically but in policy, too. Their problem is that they don’t see cultural combat as cultural combat when they’re engaged in it.

Even before Joe Biden took the oath of office, leftwing cultural signifiers—“defund police,” “open borders,” and the like—were understood to be politically toxic. With notable exceptions, it’s hard to find a Democrat with a national profile pledging his support for “amnesty” or the defunding of law enforcement. By contrast, Democratic efforts to reengineer society via legislation or executive fiat are not rare.

Democrats don’t seem to see any signs of cultural combat in policies that seek to apply a racial litmus test to the disbursement of taxpayer-provided funding. Nor can they comprehend why voters would appreciate a judicial check on a “program intended to address a long history of racial injustice in farming,” even though that check explicitly violates the 14th Amendment’s Equal Protection Clause.

Indeed, Joe Biden has sought to embed “racial equity” in “the whole of government, in all our federal policies and institutions.” That initiative has involved extricating the Justice Department from its support for the Asian-American students who alleged that Ivy League colleges were discriminating against them. It will soon involve reversing Trump-era Title IX guidance that restored jurisprudential standards on campuses. Such standards had been so relaxed in the Obama era that colleges routinely violated students’ 4th and 6th Amendment rights. The subordination of equality before the law to social-justice initiatives is culture warring, whether Democrats admit it or not.

Likewise, Democrats seem unable to recognize that government efforts to anathematize turns of phrase that were banal and ubiquitous not long ago is also cultural combat. When the Department of Homeland Security drops “illegal immigrant” for polysyllabic synonyms (“undocumented noncitizen” or “undocumented individual”), that’s policy. When DHS retires the word “assimilation” because it fails to place a premium on a foreign cultural identity, that’s policy. When the Centers for Disease Control decides expectant women are now “pregnant people,” that’s policy. It’s also culture warring.

Even Covid has become a cultural issue, in part, because the continued observance of emergency mitigation measures like masking in public and maintaining social distancing—even in schools—is increasingly regional. The regions that are likely to adhere to these protocols are also reliably Democratic, and vice versa. Republicans have the distinct advantage in this culture war of advocating the position that is the least burdensome on those who do not appreciate the burden, whereas the Democratic position maintains that all must observe these restrictions (even when Democrats themselves do not). That is becoming increasingly untenable, and Democratic governors are no longer waiting around for the White House to realize they’re on the wrong side of an enthusiasm disequilibrium. Covid-mitigation accouterment is becoming an inscrutable feature of the urban scene—one that marks its wearers as distinctly out of touch.

Maybe the most illustrative example of the Democratic Party’s blind spot—one that is often reinforced by its  unhelpful allies in media—occurred last April when the Department of Education released a draft rule providing priority access to taxpayer-funded grants in U.S. history and civics programs to candidates who “incorporate racially, ethnically, culturally, and linguistically diverse perspectives.” Specifically, candidates were asked to rely upon faddish works of anti-racist ideological coaching like the Times’ “1619 Project.” Applicants “must describe” how they would teach “systemic marginalization, biases, inequities, and discriminatory policy and practice in American history.”

When Sen. Mitch McConnell merely noticed this, it was the Republican senator who was accused of leaning “into the culture wars,” and for no grander purpose than to “throw some red meat to the base.” 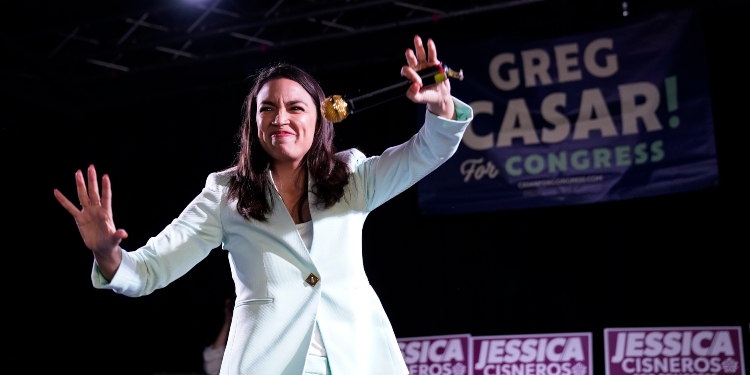