Sen. Jeff Flake has written an article in Politico attempting to rally Republicans behind the rule of law and the fundamentals of conservatism—even if that means opposing their party’s leader. The response was probably as Flake had expected: partisan. And yet, he must be taken aback by the dishonesty of agitated liberals in the political and commentary classes. They’ve made a poorly concealed effort to obscure the fact that a very weak President Trump has been subject to more rebuke, admonition, and restraints from this own party than any president in the last 40 years.

After months of pushing Republican lawmakers to speak out against Trump’s excesses—as though this president did not already have an antagonistic relationship with the party he acquired in a hostile takeover—you might think Democrats would be satisfied by Flake’s broadside against him. The Arizona senator suggested that conservatives had abandoned their ideals and that years of shallow posturing in opposition to Barack Obama had rendered their voters uncompromising and unrealistic. He said that Trump’s nomination represented a “Faustian bargain” and suggested that his presidency may still represent an extinction-level event for his ideology and his fellow party-members. To this display of vulnerability and introspection, the liberal political class has replied: not good enough.

“Until it is matched by any real action, the Jeff Flake op-ed is just a bunch of Ben Sasse tweets strung together,” wrote Hillary Clinton’s former spokesman Brian Fallon. “Has Jeff Flake done anything to use his powers as a United States Senator to check Trump in any way?” Vox.com’s Matt Yglesias asked earnestly. “Talk is cheap right now,” remarked Mother Jones’s national affairs editor Mark Follman.

These and other liberals give the impression that nothing short of caucusing with Democrats would represent satisfactory opposition to Trump. If the Democratic objective is to secure Republican allies in their effort to safeguard the country from a reckless president, they’re going about it in a counterproductive way. But that’s not the goal. Their design is to tether Trump to the Republican Party and to capitalize on a backlash against the administration next fall, not to allow Republicans to distinguish themselves from the president. Despite all their braying to the contrary, any effort by Republicans to check Trump weakens the Democratic pitch.

Liberal influencers have written off Trump-skeptical Republicans in Congress by citing their voting record in the Senate. According to FiveThirtyEight’s “Trump Score,” for example, Flake “voted with Trump” 95 percent of the time. This is an utterly worthless metric. The majority of votes taken in the Senate so far in 2017 have been nominations, procedural motions, and resolutions of little public-policy consequence. Those votes reveal almost nothing about the nature of Trump’s relationship with Congress. What of conservative legislation, like efforts to relieve the financial stress on the nation’s major entitlement programs? Are Trump-skeptical conservatives to oppose those merely to jam a thumb in the president’s eye, even though he’s opposed to entitlement reform himself? Should conservatives abandon conservative priorities in pursuit of roving Democratic goal posts?

Tallying roll call votes is an awful way to take the temperature of the political environment. Put on FiveThirtyEight’s blinders and you’d miss the fact that Republicans in Congress are beginning to castigate Trump on the record—augmenting the daily torrent of quotes attacking Trump from unnamed Republican lawmakers and their aides.

You’d definitely miss the fact that Republicans in the legislature are putting a temporary hold on efforts to repeal and replace the Affordable Care Act, despite the president’s public efforts to hector the “fools” and “total quitters” in Congress into sending him something to address health care.

You’d miss the fact that Republicans like Lindsey Graham and Charles Grassley have fired warning shots at the president in the effort to keep him from taking a run at Robert Mueller’s independent probe of the Trump campaign. You’d overlook the fact that Republicans like Joni Ernst and Orrin Hatch have criticized the president for seeking to ban transgender men and women from the services. You wouldn’t see that Congress has failed to fund “the wall,” made no effort to pass an infrastructure bill, and has balked at fast tracking the renegotiation of America’s trade relationships—and all to the sound of grumbling Republican voters.

Most important, the Trump Score utterly fails to ascribe value to votes cast. Not all bills are of equal significance, and last week’s vote is especially profound. By an astounding margin, Congress passed a measure that will reclaim power from the presidency in an area in which the White House enjoys the broadest latitude: the conduct of American foreign affairs.

By votes of 419-3 in the House and 98-2 in the Senate, the legislature sent a bill to Trump that imposes sanctions on North Korea, Iran, and Russia, but also robs the president of the ability to administer those sanctions with the leeway enjoyed by his predecessors. If he wants those sanctions eased, he will have to demonstrate to Congress how Russia is meeting certain conditions—a provision the administration unsuccessfully lobbied Congress to strip from the final bill. This is arguably the strictest imposition of terms on the president’s ability to pursue national security objectives since Congress passed the 1974 Jackson-Vanik Amendment over the objections of the Nixon White House.

There will be consequences for this, of course, and not all of them of the desirable kind envisioned in libertarian fantasy novels. Hostile regimes will take advantage of an enfeebled presidency that cannot advance their domestic interests. Congress is reclaiming authority for itself that it is too dysfunctional to administer. Republicans know this. Still, they act.

It’s no wonder that Democratic partisans wouldn’t want the public to pay too much attention to this remarkable set of events. Beyond checking the unpopular Trump presidency, Democrats are united on neither message nor platform. Their cheap bluster is unequal to the moment. This is what a weak president looks like. Trump is hemorrhaging the authority the presidency has accumulated over the generations. The anti-Trump left is hoping you simply don’t notice these developments if only to preserve their brand. Talk about cynical.

It’s one thing to hold sympathy for the GOP in reserve. They made their beds. It’s another, however, to pretend as though the only way to be a good conservative in the Trump era is to register and vote Democratic. In this dishonest way, the left is clarifying precisely where true courage can be found in the Age of Donald Trump. 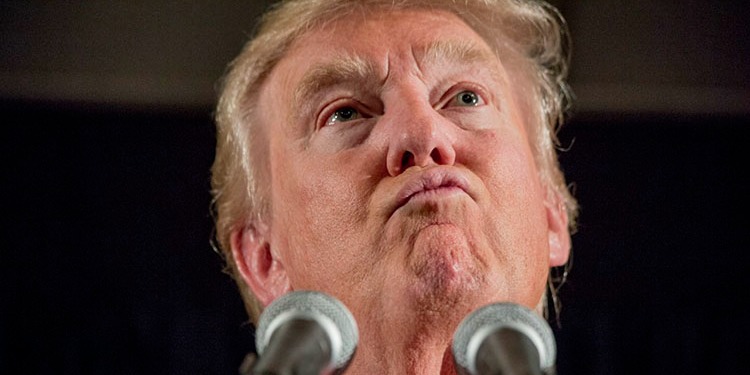