In the West, noble and heartfelt expressions of solidarity with the mounting number of European victims of Islamist terrorism are proliferating proportionate to the increasing number of attacks. “Je Suis Charlie.” “Je Suis Bruxelles.” You don’t have to be plugged-in to social media or familiar with what a hashtag is to be privy to affirmations of unity with the victims of Islamic fundamentalist violence. They appear in print, adorn digital billboards along the nation’s highways, and grace the lips of the socially conscious. Rarely, however, do you see such outpourings of grief for countries like Turkey, where Islamist terror attacks now occur with terrifying regularity, or Nigeria, where Boko Haram’s gruesome acts of barbarism are rivaled only by those of its affiliate in Iraq and Syria. Speaking of Iraq, 41 people were killed and another hundred wounded over the weekend when a suicide bomber completed his grisly mission inside a soccer stadium. Where were the sympathetic hashtags for the slain Iraqis, Nigerians, Turks, or other non-Western victims of Islamist violence?

There may be an element of Western chauvinism to this blind spot. It is, however, important to note this apparent disparity of awareness and sympathy not because it provides culturally aware Westerners the opportunity to posture or perceive themselves to be morally superior. Amid this intensifying wave of bloodshed perpetrated by only one culprit, introspection and self-criticism is the easy course. Externalities are far more threatening and the threat they pose harder to mitigate. There is no amount of chin scratching on the part of self-conscious Westerners that can end this bloodshed. There is no moral equivalence between the West and those responsible for the savagery that was, for example, visited upon Pakistani Christians in Lahore over the weekend. There, Easter Sunday celebrations were abruptly halted when a member of the Pakistani Taliban faction Jamaat-ur-Ahrar blew himself up along with a truck full of explosives. Of the attack’s 70 fatalities, most of them were women and young children.

It takes a desperate commitment to ambiguity and moral equivalence to avoid calling the unspeakable terror meted out to the members of a tiny Christian minority in predominantly Muslim Pakistan out for precisely what it is, but America’s diplomatic establishment specializes in such obfuscation. “The United States condemns in the strongest terms today’s appalling terrorist attack in Lahore, Pakistan,” read a statement from State Department spokesman John Kirby. “We send our deepest condolences to the loved ones of those killed and injured, and our thoughts and prayers are with the people of Lahore as they respond to and recover from this terrible tragedy.”

Are those really “the strongest terms?” The average cease and desist letter is more strongly worded. An earthquake is a “tragedy”; this was an atrocity, and a preventable one. At no point does the State Department make mention of the identity of the victims of this assault – Christians. Nor does it note that the terrorist organization, a branch of the Pakistani Taliban that was once aligned with the Islamic State in Iraq and Syria, are the self-identified culprits. What logic would lead the State Department to omit these details, which fully explain the attack’s motivation, but for the presumption that to use precise language in this case is ultimately counterproductive?

That is the bizarre logic that has guided the American diplomatic establishment in the post-9/11 era. It would be one thing to argue that clarity and forthrightness on the matter of terrorism somehow impedes the work of American diplomats by offending the fragile sensibilities of their counterparts in the Islamic world. The prevailing contention is that calling radical Islamic terrorism “radical Islamic terrorism” makes combating this phenomenon harder. If the Muslim world is so delicate that it will shatter at the mere mention of the fact that there is a cancer within their midst, so be it. Condemning the ideology that leads misguided young men to murder innocent children due to their religious affiliation is not so much to ask.

The mentality on display at the State Department is the mentality that typifies the Democratic presidential field’s approach to even using the term “radical Islamic terrorism.” Both Hillary Clinton and her quixotic competitors have conspicuously refused to use the term that accurately describes the enemy, preferring instead to sidestep the issue in a ham-fisted fashion and offer gauzy platitudes about the peaceful nature of the Muslim religion. “The obsession in some quarters with a clash of civilization or repeating the specific words radical Islamic terrorism isn’t just a distraction,” Clinton averred in a speech on terrorism in the wake of the coordinated attacks in Paris last November. “It gives these criminals, these murderers more standing than they deserve.” Clinton has had harsher things to say about Republicans.

You do not call an adversary by its name because it is cathartic to do so, nor do you avoid it because it would presumably impart to them some vague sense of legitimacy or authority. You do so because to clearly identify and define an enemy is to create and deepen existing moiety. An ideology cannot be undermined from within unless its opponents define what it means to be a dissident. Moreover, those dissidents cannot be inspired to dissent without being mobilized and inspired to do so by those with the courage to draw distinct definitional lines between them and us. The leftwing tenet, which bizarrely posits that calling radical Islamic terrorists who target Christian children for death on their holiest of holidays somehow plays right into the terrorists’ hands, is deeply flawed. The suggestion that men of good faith within the Muslim world would be moved to support child-killers because they feel slighted by the State Department is the height of condescension and, yes, Western chauvinism.

The diplomatic community is correct to fear that American political figures like Donald Trump, who have mobilized a substantial electoral coalition in opposition to “political correctness,” are making their jobs harder. The idea of a constitutionally dubious and unfeasible “Muslim ban” only alienates those non-radical practitioners of Islam worldwide. Only they can ultimately discredit, isolate, and defeat their radical peers; not the West. But the American diplomatic community’s refusal to acknowledge what is in front of their faces also contributes to a persecution complex among Westerners that empowers men like Trump. As much as the unconvincing notion that there is a “war on Christmas,” the diplomatic establishment’s refusal to acknowledge attacks on and the tyrannical oppression of Christians abroad lend credence to the cause of “anti-PC” crusaders.

Polls of Trump voters suggest that, among the qualities his supporters love about him most, is that he “tells it like it is.” Their definition of candor is not truthfulness – Donald Trump is compulsively mendacious. More likely, Trump’s voters believe he is willing to call balls and strikes when it comes to phenomena like radical Islamic terrorism, regardless of who it offends. Figures like Hillary Clinton and institutions like the State Department seem intent on doing all they can to substantiate these voters’ belief. 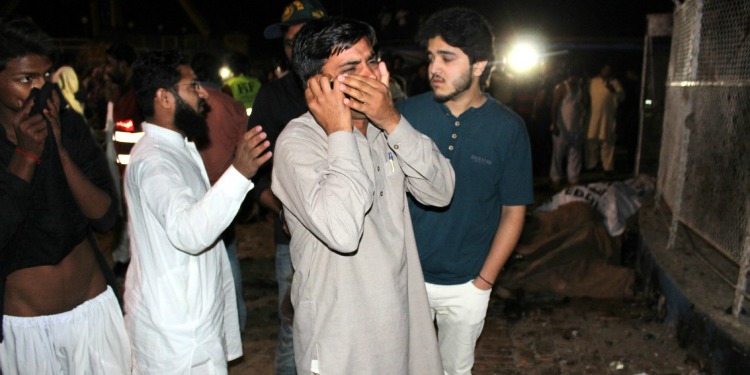