The scandal that will never die has shown renewed proof of life this week. According to the New York Times, officials within the nation’s intelligence agencies recently warned House lawmakers that Russia is once again preparing to intervene in American presidential politics on Donald Trump’s behalf. That revelation is at least as disturbing as the report’s suggestion that the president feared congressional Democrats could “weaponize” such information.

And yet, if Russia remains as invested in President Trump as it was in candidate Trump, it’s not immediately clear what Moscow is getting out of the deal. The president is as conspicuously committed to pro-Putin sycophancy as ever, but that rhetorical inclination has not translated into pro-Russia policies from the Trump administration. On balance, this administration is more hostile toward Moscow than any of its post-Cold War predecessors.

Trump not only declined to soften the sanctions the Obama administration imposed on Moscow in response to Russian election interference; he strengthened them and imposed new sanctions as well. This White House also pursued Magnitsky Act sanctions against close Putin associates—a step the Obama administration was disinclined to take. It seized Russian diplomatic property in the United States and expelled Russian diplomats. It sold interceptor missiles and liquid natural gas to Poland. It opened Ukraine’s access to lethal weaponry. It presided over the expansion of NATO despite Moscow’s active opposition. It has engaged in kinetic and diplomatic efforts to degrade the capacity of Russia’s partners in the Middle East, Syria and Iran. It has even gone so far as to engage in set-piece land battles with Russian mercenaries.

Trump has a bad habit of providing Putin with the benefit of the doubt at the expense of U.S. institutions and the diplomatic and intelligence officials who manage them. That is not a harmless exercise, but it hardly compares with the administration’s otherwise laudable efforts to isolate and contain this revisionist nation.

We are all Russia hawks now, Democrats assure us. If that is so, the administration’s policies deserve to be weighed against the president’s accommodationist rhetoric. If you’re inclined to ignore the Trump administration’s tangible efforts to combat Russian influence, I’m inclined to question your commitment to combatting Russian revanchism.

But if Russia’s return on its 2016 investments in a Trump presidency were negligible, why would it double down on them in 2020? It’s possible that Moscow believes that the president will have a freer hand to pursue the kind of permissive Russia policy to which he’s instinctually predisposed in his second term. After all, many of the conventional Republican architects of the confrontational Russia policy Trump takes credit for have left the administration and fallen out of the president’s favor. But that’s a gamble and, given the risks of such an operation, it’s more likely that Russia has soberly assessed the tangible advantages it acquired after 2016. And there have been advantages.

Since 2016, Washington has been periodically paralyzed by the fallout from Russia’s actions. The president’s efforts to counter the suggestion that his victory was tainted by Russian interference directly led to the special-counsel probe into his campaign, sowing distrust between the president and his own Justice Department and absorbing the attention of both Congress and the press for months. His desire to implicate shadowy Ukrainian figures in a 2016 meddling scheme (thereby exculpating Russia) convinced him to adopt a bizarre conspiracy theory, the pursuit of which culminated in his impeachment. As Fiona Hill, the former senior director for Russia at the National Security Council, testified last year, Russia’s objective was not to install a loyalist in the Oval Office but to impair the American president whomever that might be. “What we’re seeing here as a result of all of these narratives is that this is exactly what the Russian government was hoping for,” she averred. If Russia’s objective was to propagate a sense of paranoia and mistrust among voters, weaken the president, and preoccupy Congress with an endless series of retrospectives, mission accomplished.

To judge by the response from the president and Congress to even the suggestion that Russia plans to do it all again, this new campaign of election interference is off to a wildly successful start. It should not be so easy for Moscow to tear at the civic bonds that unite Americans, and it’s hardly inevitable that its shockingly amateurish attempts at emotional manipulation should be successful. That requires a measure of complicity on our part. We choose to give these campaigns the power they do not objectively possess, and we could simply choose not to do that again. But that’s a choice few seem prepared to make. 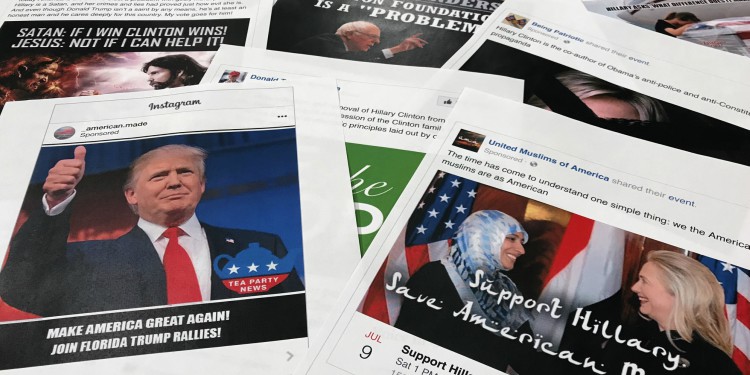