Perhaps the most revealing exchange in a Democratic debate short on fireworks took place between Sens. Cory Booker and Elizabeth Warren over Warren’s constitutionally dubious “wealth tax.” It wouldn’t have been a particularly noteworthy interaction but for Booker’s response to Warren’s claim that a wealth tax can fund progressives’ every wildest dream. In it, he acknowledged an inconvenient reality: Americans want to make money, not just confiscate it from others.

“We as Democrats need to fight for a just taxation system,” Booker said. “But as I travel around the country, we Democrats also have to talk about how to grow wealth, as well.” He noted that, in his travels, the voters with whom he speaks desire access to opportunity: the chance to start and grow a business, “create wealth,” and enjoy the American dream. “If I am president of the United States, we’re going to have a fair, just taxation where millionaires and billionaires pay their fair share, but, dear God, we’re going to have pathways to prosperity for more Americans,” Booker concluded.

The toothy and unnaturally immutable smile that graced Warren’s face amid her dressing down betrayed a new level of coaching she’d received ahead of this debate, not that it did much to improve her performance. Warren turned in her most lackluster showing since, well, the last Democratic debate. Incidentally, it was that poor presentation that arrested her rise in the polls and inaugurated what has become a precipitous decline in both the candidate’s quality and appeal to Democratic voters.

The beginning of the end of Warren’s first look from Democratic voters began in defiance of the pundit class’s conventional wisdom. She was undone during October’s primary debate not because she failed to establish her progressive bona fides sufficiently but because she could not demonstrate a capacity to appeal to the Democrats who don’t describe themselves as fervid communitarians.

In that debate, the Massachusetts senator was pressed repeatedly by both moderators and her fellow candidates to explain how she could fund the many trillions of dollars in new spending she was proposing without increasing taxes on middle-class Americans. Warren’s prevaricating assurances did more to convince voters that she was not being forthright than anything her opponents could muster.

Warren’s rise in the polls amid her full-throated advocacy for Medicare-for-all didn’t discourage candidates from attacking her core policy proposal. Rather, her fellow Democratic presidential aspirants grew bolder in their attacks on Warren’s health-care proposal. The release of a long-delayed plan to pay for Medicare-for-all did little to silence her critics and much to discourage her allies.

Its cost estimates were unrealistically low, its revenue generators were insufficient and impractical, and her command of the issues around its implementation was embarrassingly tenuous. Anyone who believes that a health insurance professional can transition the lifetime of professional experience they’ve acquired in that industry to other actuarial activities such as the provision of home and auto insurance doesn’t know what they’re talking about.

The rollout went so poorly that Warren eventually scaled back the aggressiveness with which she planned to implement Medicare-for-all, confirming her critics’ suspicions while discouraging and alienating the true believers she once counted as allies.

But while Warren was disappointing her more serious Democratic allies, she was titillating the online left by devoting her time to crafting childish tweets. Warren wrote passive-aggressive indirect responses to peripheral conservative figures with no profile outside social media. She buried Twitter CEO Jack Dorsey in an avalanche of greatly aggrieved tweets attacking him for refusing to silence political advertisers with whom she disagreed—a campaign of agitation to which Dorsey replied simply, “We haven’t announced our new rules yet.” She attempted to demonstrate her hipness by linking her war on capital markets to pop culture by suggesting the song artist Taylor Swift had become private equity’s most visible victim. She redefined car accidents as “traffic violence,” and pledged to end it. Somehow. Don’t think too hard about it.

But while Warren was being called “president of Twitter clapbacks” by apple-polishing Millennial bloggers, she was bleeding support in the polls. The senator has lost ground in the Real Clear Politics national average of primary polls relative not just to Joe Biden but Bernie Sanders. She’s lost over eight points in that measurement in the space of just six weeks. The story is much the same in Iowa, where Warren has shed five points from her October peak and ceded momentum to South Bend Mayor Pete Buttigieg. In New Hampshire, the Bay State’s backyard, Warren’s position deteriorated by eight points in roughly the same timeframe.

This precipitous decline has gone relatively unremarked upon by the national political press. Maybe they believe it is temporary and will reverse itself. Maybe they just don’t want to acknowledge the wreck to which they’ve been privy for the last month and a half. But Warren’s ship is not righting itself, and the fault for its ill-fated trajectory belongs with its captain. Warren may get a second look from Democratic voters who didn’t like what they saw, but first impressions are hard to overcome. And the Senator’s erstwhile boosters in political media have gone conspicuously quiet. 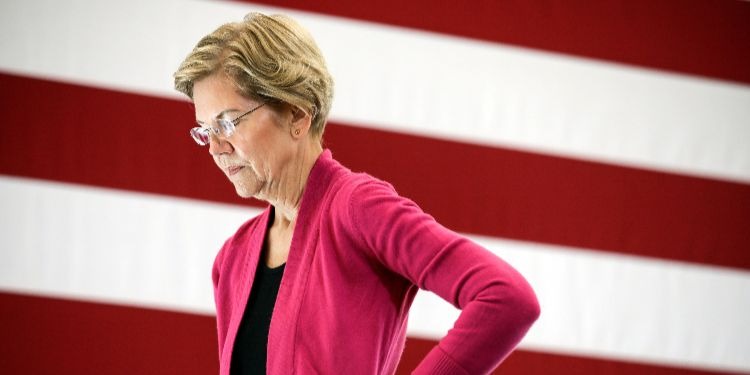