For arguably the first time in a decade, Democrats have the wind at their backs. Their candidates are outraising GOP opponents and outperforming their baseline expectations at the polls. Every metric available suggests that Democrats can expect a good night on November 6. But just how good? As the day nears when all Americans get the opportunity to register their opinion on President Donald Trump’s first two years in office, some knowledgeable observers have begun to entertain the possibility that Democrats may fall short not just of retaking control of the U.S. Senate but the House of Representatives, too.

The prospect of a Democratic takeover of the upper chamber of Congress has already been all but ruled out by prognosticators. “It’s hard to believe, but true,” Cook Political Report editor David Wasserman wrote in the New York Times on Monday. He showed that, if there were a uniform eight-point swing away from the GOP’s 2016 performance, Democrats would take control of the House with a sizable majority. But because so many Democratic incumbents are seeking re-election in Trump country this year, they would also lose four seats in the Senate. “A long-term problem for Democrats” is that “a majority of the Senate now represents 18 [percent] of the country’s population.”

This revelation precipitated some familiar bouts of angst among liberals. When the chamber falls into Democratic control, it is the “arc of politics” bending toward “increasingly marginalized” moderates, particularly when a Republican occupies the White House. When Republicans gain control of that chamber, it is either “the most effective nursing home in the world” or a hopelessly unrepresentative instrument of anti-egalitarianism.

“In the U.S. Constitution, land votes,” MSNBC host Chris Hayes wrote. That’s a cynical summation of the Connecticut Compromise, which created the bicameral legislature, saved the 1787 convention from collapse, and preserved the Constitution and all the subsequent amendments to it that expanded the definition of human freedom. It is also a perception shared by prominent figures on the left.

Comparing America’s undemocratic legislature to the government of the former Soviet Union, the Huffington Post’s George Kenney observed that the solution to the stickiness of the upper chamber of Congress “would seem to be an extra-constitutional convention, a ‘color’ revolution, that by popular acclaim entirely replaces our system of government.”

The Framers prudently made the abolition of the Senate all but impossible, but that does not render these liberal lamentations harmless. These sentiments are a matter of urgent concern, particularly given the looming possibility that voters may yet thwart Democratic ambitions at every level of the federal government.

“Ultimately,” Cook Political Report National Editor Amy Walter wrote, “I think [Democrats will] either fall a few seats short of House majority or win 35+ seats.” FiveThirtyEight’s chief and statistical analyst Nate Silver agreed. According to its forecast, Republicans have about a one-in-four chance of preserving a narrow majority in the House. Decision Desk and Optimus Election Modeling are slightly more bullish on the GOP’s chances. Their prediction gives the GOP almost a 30 percent chance of retaining their House majority. The smart money is still on the Democratic Party, but you can see why elections forecasters are hedging their bets.

It is difficult to overstate the extent to which Democrats would suffer psychologically in the event of a mid-term failure. Judging from the liberal left’s antipathy toward the Senate when Democrats are out of power, Democratic luminaries will first make excuses for their poor showing. We will hear that the House is hopelessly gerrymandered in favor of the GOP, voter-identification laws and other onerous burdens have yielded a “rigged system,” and the Russians tampered with vote tallies. The logic may shift, but the conclusion is static: Not only are these elections potentially illegitimate, but so, too, is the entire constitutional structure of the Republic.

The Democratic Party’s grassroots will be similarly discouraged. The culmination of its efforts, years of demonstrating in the streets, fundraising and organizing for candidates and causes–all of it will have been for naught. Americans will have gone to the polls, in the grassroots’ view, to ratify two years of racial antagonism, sexist repression, and corruption at the highest levels of the federal government. Not only will the Constitution itself become suspect, but the American people will have demonstrated their irredeemable bigotry. The irrational, apocalyptic rhetoric that typified the liberal reaction to Supreme Court Justice Anthony Kennedy’s retirement was an indication of the simmering tensions on the left. How will it react to the revelation that Trump’s agenda will remain unchecked for another two years and that voters appear disinclined to oust him from office in 2020?

Some liberals will despair and withdraw from public life. Others will tamp down their frustration and take heart in the Democratic Party’s state-level gains. But there will be a sizable contingent that resolves to take a more radical course.

The harassment of White House officials and their families, for offenses ranging from the separation of families at the border to the repeal of arcane regulatory mechanisms, has already been mainstreamed by the Democratic Party’s more irresponsible voices. Violent left-wing activists who resort to property damage and assaulting reporters and police to register their dissatisfaction with the government are already out in disturbing numbers. Left-wing violence is celebrated and legitimized by liberal publications and the radicalized professorate. The appeal of these expressions of rage and hopelessness has been dampened by the evidence that voters were prepared to rebuke Donald Trump and his GOP when they next had the chance. The allure of this volatile movement and its fanatical methods will surely grow if hope is dashed.

Those who fancy themselves the “Resistance” pay nominal homage not to a loyal opposition in a free and liberal republic but to a militant insurgency. That self-indulgent fantasy has already yielded fatalism and grotesque violence. All that has so far prevented this semi-revolutionary movement from reaching critical mass is the faith that conventional liberals have displayed in the wisdom of the voters and the capacity of law to triumph over the capriciousness of those in power. But what happens when that faith is gone? When both the radical left and conventional Democrats believe their grievances are no longer receiving a fair hearing and their constituents are being unfairly denied representation and redress, to what means will they resort next? We may soon find out. 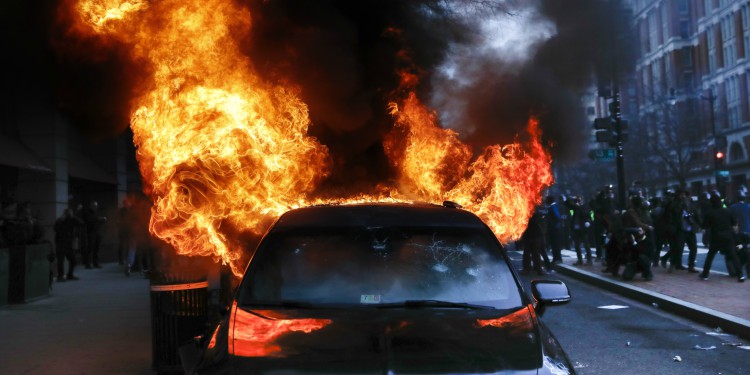