Millions of Americans watched with great apprehension as Donald Trump spent the 2016 presidential campaign vigorously supporting Vladimir Putin’s strongman regime. That apprehension did not dissipate when, just months after taking the oath of office, President Trump defended Putin’s murderous government by suggesting the United States has no right to judge. “You think our country’s so innocent?” the leader of the free world barked.

Donald Trump seemed quite willing to sacrifice American credibility in service to his bizarre, albeit consistent, desire to ingratiate himself with the autocrat in the Kremlin. That is what’s made his administration’s turnaround so remarkable. The Trump White House quickly abandoned his version of a “reset” in relations with Russia. It has seized Moscow’s diplomatic property in America and imposed Magnitsky Act sanctions on close Putin associates. It has sold interceptor missiles and liquid natural gas to Poland, a frequent target of Moscow’s intimidation, and it has fulfilled a longstanding request from Ukraine to access American lethal arms. Just this week, the administration complied with a bipartisan act of Congress requiring the imposition of new sanctions on Moscow related to its meddling in the 2016 election campaign, building upon Obama-era sanctions that this White House has dutifully maintained.

When it comes to the need to contain an aggressive and expansionist Russia, the Trump administration has a good story to tell. It is enraging then that they refuse to tell it.

On Tuesday, President Trump called Vladimir Putin to congratulate him on his fourth reelection to the Russian presidency. Later that afternoon, White House Press Secretary Sarah Huckabee Sanders was asked if the administration believed Putin’s victory was a fair one. “In terms of the election there, we’re focused on our elections,” Sanders said. “We don’t get to focus on how other countries operate.” She added that “we can only focus on the freeness and fairness of our elections.”

This is cowardice masquerading as enlightened detachment. Of course, the United States can and has weighed in on the freeness and fairness of elections around the world. Not only have past administrations done so with regularity; this administration has done so frequently.

As recently as January 24, in fact, State Department Spokeswoman Heather Nauert said in a statement that “the United States strongly rejects” the Venezuelan government’s decision to hold a snap presidential election designed to disenfranchise opposition parties. That “vote would be neither free nor fair,” she said. On February 8, Nauert went so far as to endorse the opposition boycott of that vote. “We stand with the hemisphere in support of the Venezuelan people and their sovereign right to have their votes counted in free, fair, and transparent elections,” she added. UN Ambassador Nikki Haley, too, condemned the Maduro regime’s “fraudulent” elections. Even Sanders condemned Maduro for holding unfair elections and choosing “the path of dictatorship.”

The administration doesn’t just condemn; it also congratulates. Trump’s State Department has issued plaudits to nations like Honduras, Chile, Nepal, Slovenia, Liberia, and Lesotho for holding legitimate elections. It issued a statement of concern following a rocky transition that was the result of Kenya’s 2017 presidential election, attacked undemocratic election laws in Cambodia, and has condemned the “persistent flaws” in Nicaragua’s democratic process “as illustrated by” last year’s municipal elections. America has found “irregularities” in Rwanda’s elections process and it has attacked as “illegitimate” snap elections in Georgia’s “occupied regions,” which have been held captive by Russia since 2008.

The United States weighs in on the legitimacy of elections all over the world all the time. There is, however, no State Department statement on the latest elections in the Russian Federation. And they were by no means free and fair.

According to observers from the Organization for Security and Cooperation in Europe, Russia’s presidential election was “well-administered,” but “took place in an overly controlled environment, marked by continued pressure on critical voices” and “restrictions on fundamental freedoms.” The abuse of electoral freedom was so flagrant that Russian election workers were caught stuffing ballot boxes on camera, making no effort to disguise their abuse. The OSCE also alleged that Moscow ensured there was no “genuine competition” for Putin to guarantee that he would win an outright majority and avoid a runoff election on the first ballot. To achieve this feat, though, the number of registered Russian voters had to inflate by nearly 1.5 million people.

To call this election what it was—unfree and unfair—would only be to acknowledge reality and echo the assessment of the OSCE. Maybe this president still harbors delusions of a grand rapprochement with Russia. Perhaps he has failed to internalize the fact that the Soviet Union is no more; that would explain why he thinks he can negotiate with Putin over a non-existent “arms race.” Whatever the case, it is clear now that Donald Trump will never abandon his fanciful misconceptions about Russia. Moscow and Moscow alone benefits from Trump’s conspicuous double standards.

It is a miracle that Trump’s administration does not act upon the illusions that haunt the imagination of the president, but that is a condition that voters cannot rely upon to prevail forever. For now, Trump’s inconsistencies do not imperil American national security, even if they do give license to appeasers and aspiring authoritarians to entertain their darkest impulses. One day, though, Donald Trump’s government may act in a way that is consistent with what the president clearly believes America’s policy toward Russia should be. That will be a dark day for democracy, indeed. 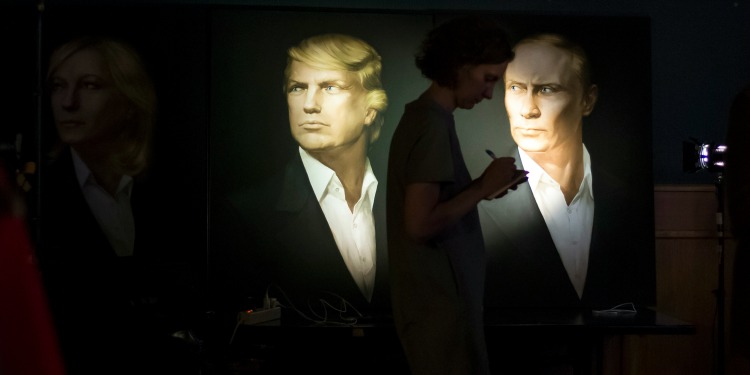