How has it come to this, that the eternally unrealized promise of socialism once again entices so many young Americans? To the extent that the question is a subject of interest outside conservative circles, it’s one that piques only the mildest curiosity. And when the matter is explored, that investigation is undertaken with a social scientist’s detachment and dispassion.

Of this trend, the Atlantic’s Annie Lowry’s contribution is denotative. Her diagnosis is straightforward: For millions of voters, the “Red Scare is no longer scary.” And though she does her best to present the roots of this vexing condition as multifarious and organic, the ambiguous portrait she paints of the socialist-friendly American electorate exposes the true source of this political and intellectual crisis.

Of all the culprits responsible for socialism’s image makeover, American conservatism is one of the few nefarious movements Lowry manages to call out by name. Though she concedes it was likely inadvertent, the right’s penchant for seeing the specter of socialism in virtually every progressive policy prescription contributed to young voters’ perception that the threat is overblown. It was the right that established a “binary choice” between free markets and command-and-control economics, she writes, thus reducing the compelling power of “communism”—not even jejune “socialism”—as a “political cudgel.”

There is a kernel of truth to this, as many conservatives have freely admitted in recent years. It is, however, excessively credulous to contend that young voters’ political consciousnesses are informed by a handful of overwrought Glenn Beck monologues from 2009.

Perhaps the guiltiest of perpetrators, in Lowry’s estimation, is the “simple passage of time.” The Millennial and post-Millennial generations were “never exposed to the threats of the Soviet Union,” she writes. They have no first-hand knowledge of how state-run industry affects prices and quality of service. They’ve only heard about the refugee crises that punctuated the Communist epoch second-hand, if they heard about them at all. They never experienced an air-raid drill, never read dissidents or met a Refusenik, and never participated in a black economy that wasn’t built up around the trade in illicit narcotics. For these voters, the Cold War is an academic concept.

What younger voters do know more intimately, Lowry observes, are conditions like “yawning inequality, heavy debt burdens, obscene costs of living, and stagnant wages.” And as these voters have become more favorable toward redistributionist politics, they’ve gravitated toward the “worker-centered” policies of Bernie Sanders, which are tempered by his “consistent” “opposition to totalitarianism and autocracy and street violence.” After all, “the guy has always been clear that he wants the United States to become more like Denmark, not Cuba.” That’s the kind of clarity afforded only to those committed to pretending Sanders’s career in the public eye began in 2015.

It’s difficult to think of a similar example of ignorance that would be waved off with such insouciance. Would American voters with no first-hand memory of the Holocaust be forgiven for drifting into the arms of neo-Nazi movements? Are younger Americans no longer expected to maintain some understanding of America’s experience with slavery and Jim Crow laws? Should we withhold judgment on Americans who “did not live through” the Apartheid era and have never heard the name P.W. Botha? Or is it incumbent on those of us who do have a passing familiarity with these abuses and those responsible for them to educate our benighted fellow citizens? Given the level of commitment popular liberal intellectual culture dedicates to cultivating awareness around these repugnant episodes in recent human history, it is conspicuous that many can only muster a shrug when confronted with post-Soviet amnesia.

Lowry appears to see the Great Forgetting as a source of exculpation for Americans who know nothing of the suffering endured by those who lived under collectivism. In fact, what she’s written is more of an indictment—not just of those voters but the institutions and enterprises devoted to socialism’s rehabilitation. If the right is guilty of seeing a Communist conspiracy down every blind alley, center-left media rarely misses a chance to highlight the virtues of life under the red star.

In 2017, the New York Times treated its readers to a series of retrospectives on the legacy of Marxism 100 years on from the Russian Revolution. Subscribers were treated to Orwellian essays that explored how China’s Maoists “made women’s lives much better,” why East German women had more fulfilling sex lives than their counterparts in the West, how the U.S. imposed an imperious peace on its defeated rivals in the former Soviet space, and why socialism is really just “radical democracy.” A cottage industry has sprung up around labored efforts to erect elaborate explanations for Venezuela’s collapse, absolving the Bolivarian socialism that nationalized much of the Venezuelan economy and rendered it nonfunctional. Despite spending four decades professing his ideological affinities to all willing to hear it, Bernie Sanders is no true socialist, so this thinking goes, but Donald Trump most certainly is.

And why should these committed progressives not try to muddy the waters as much as they can? Their shared ethos, which regards “increasing control over property in the public interest” as critical to the optimization of the human condition, is unchanged from the days when the New Republic co-founder Herbert Croly wrote that modern progressive mission statement. The great socialist experiment is too big to fail. So, when Bernie Sanders fires off a rote condemnation of the “authoritarianism” that accompanies Marxism as though it was not a feature of all regimes with a distinctive red hue, the journalistic machine that can usually be counted on to properly contextualize and condemn the systems responsible for human suffering sputters to a halt. Apologia that would otherwise be a call to action if offered in service to any other ideology is met with muted chin-scratching.

“Red-baiting might not work with Millennials,” Lowry, the author of Give People Money: How a Universal Basic Income Would End Poverty, Revolutionize Work, and Remake the World, observes in closing. Indeed. Mission accomplished. 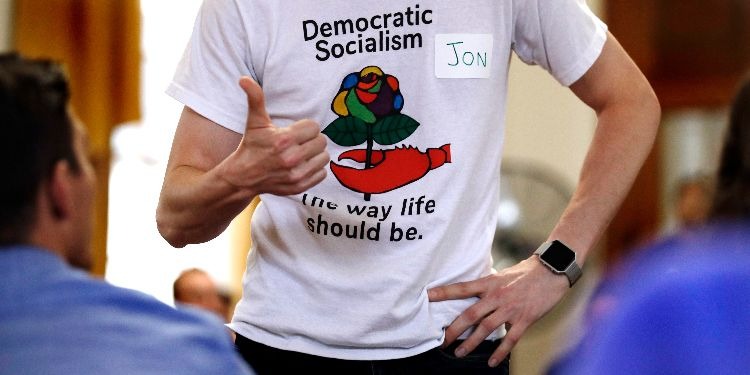