It is a testament to the combination of spinelessness on the part of party elders, complicity from the conservative media complex, and excessive cleverness by Republican presidential campaigns that we are today assigning fault for Donald Trump’s rise even before the first votes are cast. The pervasive waft of resignation pollutes the air around the hollowed out carcass that we occasionally refer to as the Republican “establishment,” for want of a more descriptive term. Rather than resist the hijacking of conservatism with any unity or conviction, Republicans are busily casting about for someone to blame. There is plenty of responsibility go around, but it is not Republicans’ alone.

On Thursday night, National Review published a much-anticipated symposium featuring a variety of conservative intellectuals and columnists, including COMMENTARY’s own John Podhoretz, rallying the conservative movement against Donald Trump. That center-right political magazine accompanied this broadside with its own editorial asserting that the conservative movement will be all but crushed if Trump were to secure the Republican Party’s presidential nomination. It was a welcome counter to the laughable narrative promoted by so many trusted conservative media outlets that the erstwhile pro-choice, semi-isolationist, abuser of public domain is conservatism’s last best hope.

To survey the liberal political opinion landscape’s take on National Review’s unalloyed attack on Trump’s credibility is to be privy to more than a hint of self-satisfaction. The consensus on the left seems to be that conservatism as a movement, and National Review, in particular, created Trump and Trumpism.

“Trump is feeding off of paranoia that (National Review), among many others, assiduously cultivated,” The Foundation for Middle East Peace’s Matt Duss averred.

“The symposium gets off to a rocky start by beginning, admittedly for alphabetical reasons, with a contribution from Glenn Beck. With his long history of racism and conspiracy-mongering, Beck has all the flaws of Trump many times over,” The New Republic’s Jeet Heer scoffed. He took particular exception to Thomas Sowell’s contention that the swelling public fascination with Trump and his dominance of both political and popular media culture is, as it was with personality cultists like Juan Peron, Adolph Hitler, and Barack Obama, both “sobering” and “depressing.”

Sowell’s belief that a coup could be good for America and that Obama can be fairly compared to Hitler gives lie to the argument, made repeatedly by writers in the National Review symposium, that Trump is not a true conservative. For there is very little that Trump has said or done that can’t find prior sanction in National Review, be it racism, anti-immigrant nativism, or sexism.

Heer’s protest is just a touch too emphatic. His citations above include National Review’s opposition to Barack Obama’s reelection in 2012 and editorials the magazine published in 1963 and 1992 respectively. These are hardly convincing explanations for the rise of Trump in 2015, although they do merit serious critical introspection on the part of conservatives. Indeed, as the Weekly Standard’s Stephen F. Hayes astutely observed, there is blame enough for Trump’s rise to go all the way around the conservative movement to the GOP and back. Should conservatives fail to stop the imposter in their midst from seizing the Republican Party out from under them, what remains of the movement will need to do some soul searching. It is curious though that Democrats seem so disinclined to take a dispassionate look at their own role in fomenting the present suboptimal moment.

It was President Barack Obama and his fans who led America into a culture of celebrity worship. It wasn’t George W. Bush or even Bill Clinton who seemed more comfortable on the set of a late-night comedy program than he did in the Oval Office. It was Barack Obama’s vaunted “pen and phone” and his party-line style of governance that engendered such antipathy toward the traditional levers of constitutionalism and discredited responsible opposition. Republicans are under attack from their base voters today for failing to prevent all those executive actions (not executive orders, mind you, which would have some force of law) that they had no legitimate power to address. He rendered conservative’s adherence to the Constitution and the veneration for the separation of powers a quaint and outmoded notion. Surely, these passionate conservatives reasoned, only those for whom “winning” is a secondary consideration would allow Obama’s abuses of authority to stand.

It was Obama who sowed division when it suited him. It was his attorney general for most of his presidency who repeatedly insisted that any opposition to this administration and its agenda was rooted in racism. “I want you to argue with them, get in their faces,” the president demanded of his supporters in 2008. The issue tearing the conservative wing of the conservative party apart today, immigration, was used by this White House specifically as a wedge to divide Republicans. “The White House plans to use the immigration debate to punish the GOP and aggressively seek the Latino vote in 2012,” the Washington Post reported in the summer of 2010. They wanted to pit the GOP’s reformers against its traditionalists in order to alienate Latino voters in 2012. Now Democrats would protest because their strategy worked?

Nothing raises the left’s hackles like the notion that Barack Obama has been one of the most divisive presidents in modern history, but that assertion is not only empirically true, it is quantifiable. “(H)is tenure has been one of the most polarizing overall of any modern president,” CNN reported last year, citing Gallup data. “Each of his six years in office have ranked in the top 10 most polarized since 1953, with President George W. Bush taking the other four slots.” The president himself admitted as much in his final State of the Union address. “It’s one of the few regrets of my presidency — that the rancor and suspicion between the parties has gotten worse instead of better,” Obama said. And who did he blame for that condition? Not himself, but “the demands of getting elected” – e.g. voters, partisans, you.

No one wants to assume any blame for the ugliness of the present moment, but we all bear some. That a third of the Republican Party’s voters would embrace an unreconstructed autocrat is extremely worrisome, but the liberal movement is whistling past their own graveyard if they were to simply scold this development and eschew self-awareness in the process. To take a brief survey of the totalitarian leftism incubating on college campuses today is to be aware of a time in the very near future when liberalism will have to slay its own autocratic demons. The terrible truth is that Democrats and Republicans together birthed this creature. There will be time enough for recriminations and assigning blame when the battle against it is over. That’s tomorrow’s fight. There is a far more pressing one to join today. 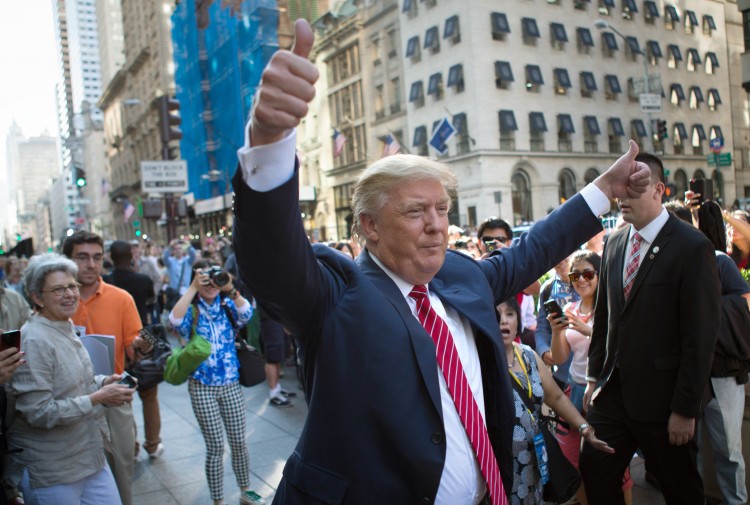