Following a Republican nominating convention that was marred by bizarre scheduling, leaks to Democratic operatives, chaos, and disunion, the bar for relative success at the Democratic convention the following week was set pretty low. With the wounds from the primary process appearing, at least superficially, to have healed, Democrats were set to strike a favorable contrast to the GOP with a largely uneventful coronation and a display of common purpose. That would have been an illusion. As WikiLeaks demonstrated this week with the release of a series of covertly obtained emails from the Democratic National Committee, the appearance of party unity was only ever just that: appearance.

Of the nearly 20,000 emails released by WikiLeaks, many of them contain delicate communications from seven key DNC employees. The emails contradict Democratic claims that no sensitive information was exposed by the initial hack in June—several donors’ personal information and credit card numbers were exposed by the leak. That is surely creating tensions just beneath the surface of the Democratic coalition, but one particular email communication has already ignited a full-scale scandal.

The email from a DNC staffer in mid-April, as Sanders was in the middle of a streak of primary victories, revealed how threatened the party’s brass was by the surging self-described socialist. In it, DNC CFO Brad Marshall floated the prospect of the Clinton campaign using Sanders’ faith, or lack thereof, to damage his brand among Southern Democrats.

“It might may no difference, but for KY and WVA can we get someone to ask his belief,” the email read. “Does he believe in a God. He had skated on saying he has a Jewish heritage. I think I read he is an atheist. This could make several points difference with my peeps.”

The revelation threatens to shatter the fragile peace between Clinton backers and Sanders supporters. Marshall has already apologized for his “insensitive, emotional emails.” In a display of penance, DNC Chairwoman Debbie Wasserman Schultz announced she would not speak at her party’s nominating convention. Not good enough, said Sanders. Wasserman Schultz “should not be the chair of the DNC,” he said.

The Sanders camp is making the most of the kerfuffle by insisting that someone in the party’s central committee should be “held accountable” for the mess. To the extent that Sanders supporters are hoping to leverage their candidate’s support in the primaries to make substantial changes to the party’s platform, the appearance of bias against them will create sympathy and give them a boost.

Those are the politics of this episode, but much of that is also a contrivance. These leaked emails also have a lot of potential to backfire and, counterintuitively, create as much party unity as they destroyed.

The prospect of a ranking Democratic National Committee staffer using his perch to advise a candidate in the presidential primaries is a genuinely disturbing ethical breach. The revelation, however, that the Democratic National Committee was suspicious of a fringe candidate whose politics are well to the left of the country who was not even a member of their party until last autumn should surprise no one. The fact that a committeeman thought it was smart politics to impugn Sanders’ religious beliefs is ugly indeed. “We’re better than this,” Clinton said of the Republican nominee’s baiting and xenophobic politics. Guess not. But while these sentiments were untoward, they came to nothing and amounted to little more than an errant thought on the part of the party’s financial risk manager.

Finally, the source of these email leaks should disturb all Americans of every political stripe. These emails, laundered through WikiLeaks, were likely obtained by Russian intelligence operatives in June. “The networks of presidential candidates Hillary Clinton and Donald Trump were also targeted by Russian spies, as were the computers of some Republican political action committees, U.S. officials said,” the Washington Post reported at the time. It is no coincidence that only a handful of these communications specifically related to Democrats were released on the eve of a Democratic nominating convention. This has the appearance of a foreign power directly interfering in an American election, and that’s not something to take lightly.

Today, Democrats are reliving the bitterly contested primaries, but that won’t last. The primaries are over, and the party will nominate Clinton to the presidency early next week. The candidates do not seem as inclined as their voters to refight past battles. What may have a more lasting political impact is the appearance that the Russian government is intervening in the presidential election. Rather than applaud and leverage this development, as he has, Donald Trump would be much better served by condemning it. If the Russians are set on undermining the Democratic Party in this election, it won’t be long before the public is asked to consider why that might be. 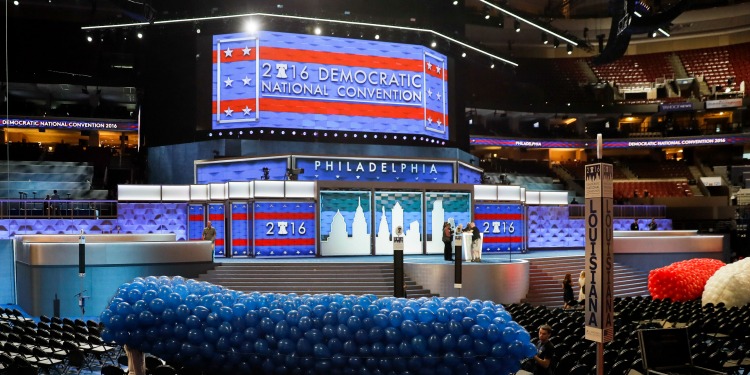