“In war, resolution,” Winston Churchill wrote in his six-volume series of recollections on the conduct of the Second World War. “In victory, magnanimity.” This noble sentiment is the latest target of a marauding cast of censorious revisionists who perceive themselves to be enlightened. The timeless, beneficent wisdom in these words is, apparently, subordinate to the supposed evil of the man who expressed them.

Scott Kelly, a retired U.S. Navy Captain, NASA engineer, and veteran of four spaceflights, was brought low on Sunday by those possessed of neither his accomplishments nor talents for the crime of advocating Churchillian generosity of spirit. “Did not mean to offend by quoting Churchill. My apologies,” the astronaut wrote after what must have been a withering assault on social media. “I will go and educate myself further on his atrocities, racist views which I do not support.”

This is only the most recent example of a menacing phenomenon. In the name of historical literacy, an absurd form of pseudo-academic reductionism has become the preferred means by which we “interrogate” Western (and only Western) history. We are told that we must abandon discretion, compartmentalization, and basic good sense if we are to be taken seriously by the self-appointed arbiters of such things. Nuance is for the naïve. Sensibility is found only in simplicity.

The notion that Churchill’s memory should be consigned to that space where history’s greatest monsters reside is derived not from an assessment of his conduct of European affairs but those of the British empire. You see, Churchill was an imperialist. More damningly from the perspective of his fiercest postmodern critics, he was a colonialist—more so, in fact, than many of his peers.

Churchill served as a junior cavalry lieutenant on India’s North-West Frontier at the height of the British Raj. As the sun set on the Victorian era, the future prime minister acquired the belief that the British yoke was the only thing keeping the subcontinent from dissolving into civil war and balkanization. And in evincing these beliefs, Churchill did exhibit supremacist views. “The soldiers of India naturally feel the effects of the climate less than those from cooler lands,” he wrote at the age of 22. “The dominant race resent the slightest suggestion of inferiority.”

During Churchill’s period in the political wilderness in the 1930s, he became a fierce opponent of dominion status for India. And he was an even fiercer opponent of Mahatma Gandhi, a figure whose memory seems exempt from the revisionism to which Churchill’s critics are prone, no matter how much he might deserve it. In fact, amid a campaign of civil disobedience in India that had yielded sympathetic advocates within Britain’s Labour government, Churchill’s dogmatism on the India question contributed to his alienation from much of the ruling political elite. That estrangement proved to be a disaster for his country. Churchill’s isolation ensured that his other political passion—the threat posed by German rearmament—went ignored.

In a sane society, we would weigh these offenses against propriety against his accomplishments, foremost among them being the resolve he exhibited and inculcated in his countrymen in the face of the Nazi onslaught. Churchill resisted the demands of his less resolute colleagues in government to strike a separate peace with Hitler and stood alone against the Blitz until the United States was compelled to enter the war. Had he wavered, Western civilization and contemporary definitions of liberty would be quite different.

Some, like Dr. Shashi Tharoor, have alleged that “Churchill has as much blood on his hands as Hitler does.” He bases this assertion on the prime minister’s 1943 decision to divert food aid from famine-stricken Bengal to British Expeditionary Force soldiers deployed in Greece, contributing to a plague of starvation that claimed 4.3 million people. That atrocity, it is implied, is an outgrowth of Churchill’s antipathy toward the cause of a free India. But even if a pro-dominion advocate like Earl of Halifax Edward Wood had succeeded Neville Chamberlin in 1940, he would still have had to triage food aid to maximize the chances of victory in a war for national survival. To contend that the terrible choices forced upon leaders in wartime are equivalent to a campaign of ethnic cleansing and genocidal extermination precipitating that war isn’t enlightenment. It’s grotesque monomania.

All of this amounts to more attention than history’s revisionists deserve. Few genuinely believe that exponents of Aristotelian philosophy are also endorsing classical presumptions surrounding racial hierarchies and the inferiority of women. Fewer still honestly think that citing the revolutionary ideas contained in the Declaration of Independence or George Washington’s farewell address amounts to a ratification of the practice of black slavery in America. Almost no one with a vested interest in the preservation of Western civilization believes a man partly responsible for its salvation is irredeemable because of his intellectual and character flaws. No one worth taking seriously, at least. 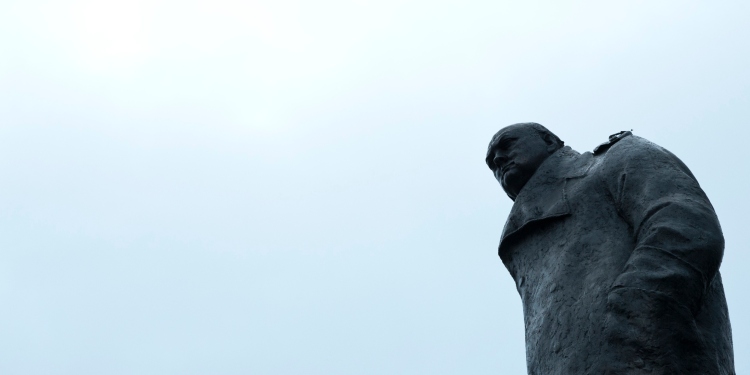