In February, San Francisco’s voters cast out three members of the city school board in a landslide recall election. On Tuesday, the Bay Area’s voters will have the opportunity to recall the city’s district attorney, Chesa Boudin, and the odds are not in his favor. It isn’t hard to understand why San Francisco’s residents are rebelling against the status quo; the individuals they entrusted to educate students and prosecute criminals stopped doing both. That simple explanation for events doubles as an indictment of progressive governance, which understandably discomfits progressives. So, some on the left are crafting a far more complicated narrative that absolves them of responsibility for their circumstances. One of the more amusing of these delusional episodes posits that San Francisco is just too conservative.

“In some sense, there are two San Franciscos,” New York Magazine’s Ross Barkan stipulates. There is the city you know and have known for decades, which has incubated a political culture well to the left of nearly any other major American metropolitan area. But there is another San Francisco, he adds; a city that is profoundly conventional and even a little right-wing.

“Modern San Francisco, unlike New York, does not rest on the legacy of a social-democratic state forged with New Deal largesse,” Barkan continues. “From 1912 to 1963, only Republicans governed San Francisco, and they were largely backers of big business who could occasionally draw support from organized labor.” The city, therefore, lacks a deeply rooted working-class population that could ballast progressive politicians at the polls. Likewise, San Francisco’s “black population is declining,” robbing the city of an African-American political establishment. And while Silicon Valley casts a progressive gloss over the city, the members of this wealthy caste resent the “visible poverty” and squalor that has become a feature of their daily life.

You might not expect a city that hasn’t elected a Republican to the mayoralty for a half-century—a city that leans Democratic to the tune of 38 points and has sent Nancy Pelosi to Congress every two years since Ronald Reagan was in the White House—to be a hotbed of conservative thought. And yet, the city’s current mayor, London Breed, “exists somewhere on an ideological spectrum to the right of Bill de Blasio,” and even she has left Boudin for dead. It’s hardly a feat to position yourself to the right of a one-time socialist who raised money for the Sandinistas and honeymooned in Communist Cuba, but you have to take your Bay Area right-wingers as they come. In fact, Breed backed the movement to defund police departments and went so far as to cut $120 million from her city’s law-enforcement budget when that was the faddish thing to do. She only saw the light when crime rates in her city exploded, and the law-abiding public went on a recall frenzy.

Barkan notes that Boudin is cut from the same cloth as other progressive prosecutors like Philadelphia’s Larry Krasner and St. Louis’s Wesley Bell. Indeed, that is the problem. As Andrew McCarthy observed in a 2020 essay in COMMENTARY, Boudin was one of many left-wing prosecutors who entered office possessed of the idea that high levels of arrest and prosecution contributed to the phenomenon of “mass incarceration.” The solution to this conundrum would be to undercharge accused violators, eliminate cash bail, or stop prosecuting certain offenses altogether. Krasner has presided over a significant spike in violent crime, while St. Louis County is contending with a sudden surge of “justifiable homicides.” Both these district attorneys have become the subject of political controversy and recriminations for the same reasons that have landed Boudin in hot water.

Barkan dismisses the case against Boudin’s conduct, which he attributes to “forces largely beyond his control.” San Francisco’s housing shortage, the mayor’s lethargy, judicial discretion, and the city’s police have more to do with rising crime rates than the DA, he writes. This tidy story robs Boudin of credit for all his hard work. Boudin’s city is awash with homelessness. Open-air drug markets are as prolific as the use of illicit narcotics on city streets. These offenders face no penalty because they are “themselves victims of human trafficking,” according to Boudin. He opposed the city’s decision to declare a state of emergency in the Tenderloin neighborhood, where locals are routinely terrorized and overdoses are desperately common, because the “short-sighted” policing action failed to address the “root causes of crime.” Hate crimes, particularly those targeting the city’s Asian population, are up, and retailers are leaving the city in droves to escape the epidemic of gangs brazenly looting stores in broad daylight. If the people responsible for these acts are arrested, they’re often able to plea down their charges to misdemeanors involving no prison time.

In Barkan’s telling, San Francisco’s residents are consumed with inchoate rage and just want to “punish someone.” It’s a “reactionary” response to adversity, and it is being fueled by “heavy right-wing cash.” Just as the criminal-justice reform movement so often confuses perpetrators with victims, Barkan has not given Boudin his due. “We ran on a very transparent platform committed to systemic change,” Boudin told an audience of progressives in early 2020. “That’s why I was elected.” If Boudin is recalled, it will not be because San Francisco’s vestigial conservatism is making a comeback. It will be because the district attorney put his ideological goals ahead of the well-being of the city’s residents. That’s an unsatisfyingly simple story, but it has the advantage of being true. 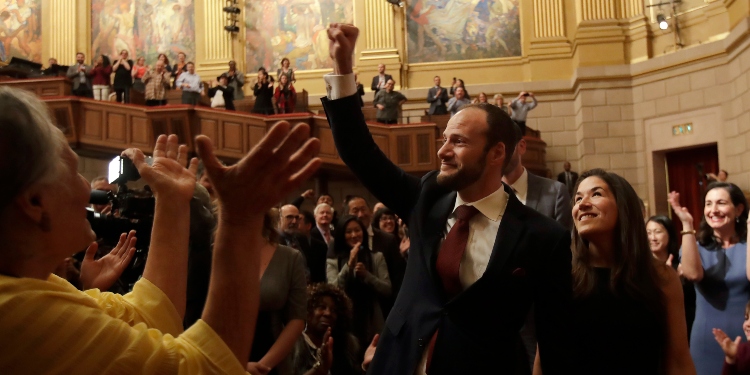