An unintended consequence of President Trump’s Paris Accord indecision has been exposure of the agreement’s underlying fraud. The activists and G7 leaders beseeching him desperately to remain raised the question: What sort of climate club would want a member who calls its topic a “hoax” and flatly rejects its policy prescriptions? One whose primary purpose is good food and conversation, not a substantive international response to climate change.

Proponents once argued they had built something imposing—“the enduring framework the world needs to solve the climate crisis,” as President Obama described it, with “bold” and “ambitious” targets. But the prospect of the queen bee leaving the table prompted assurances that participation is really no inconvenience at all. Please, Mr. Trump, just stay for dessert!

This revised view is closer to the truth. The Accord was doomed before negotiators ever assembled for photographs in December 2015. They were not there to commit each country to meaningful greenhouse-gas reductions; rather, everyone submitted their voluntary pledges in advance, and all were accepted without scrutiny. Pledges did not have to mention emissions levels, nor were there penalties for falling short. The conference itself was, in essence, a stapling exercise.

Celebrating the success of this collation coalition, Secretary of State John Kerry claimed that “186 nations in the world came together to submit a plan, all of them reducing their emissions.” That was not true. In fact, most of the major developing countries, whose emissions will drive climate change this century, pledged only to continue with business as usual.

China committed to begin reducing emissions by 2030, roughly when its economic development would have caused this to happen regardless. India made no emissions commitment, pledging only to make progress on efficiency—at half the rate it had progressed in recent years. Pakistan outdid the rest, submitting a single page that offered to “reduce its emissions after reaching peak levels to the extent possible.” This is a definition of the word “peak,” not a commitment.

Since then, the farce has proceeded as farces do. Secretary Kerry claimed the Accord would unleash clean-energy investment. “It is going to move the marketplace,” he said, calling it “a break-away agreement which actually changes the paradigm” and will “spur massive investment.” Instead, global investment plummeted by 20 percent in 2016 compared to 2015, according to Bloomberg New Energy Finance. The first quarter of 2017 saw another 17 percent decline versus 2016.

The volunteer pledges have commanded precisely the respect they deserve. An April report by Transport Environment found only three European countries pursuing policies in line with their Paris commitments and one of those, Germany, has now seen two straight years of emissions increases. The Philippines has outright renounced its commitment. A study published by the American Geophysical Union warns that India’s planned coal-plant construction is incompatible with its own targets. All this behavior is socially acceptable amongst the climate crowd. Only Trump’s presumption that the agreement means something, and that countries should be forthright about their commitments, is beyond the pale.

Somewhat incredibly, Todd Stern, the Obama administration’s lead climate negotiator, took to the Washington Post to explain that the U.S. could even revise downward its own commitment to eliminate any potential burden. “I know,” he seemingly bragged, “because I helped negotiate that flexibility.” Compare this to his defense of the agreement when signed, in which he repeatedly used the word “ratchet” to describe a process where countries would only strengthen their commitments. But rather than see the cocktail hour interrupted, even that last vestige of substance was flung overboard.

So should the U.S. have stayed or gone? To quote another of President Obama’s secretaries of state: “What difference, at this point, does it make?” For the climate, not much of one. The Massachusetts Institute of Technology’s assessment of the agreement found that even full compliance would only have reduced global temperatures in 2100 by only 0.2 degrees Celsius.

Instead, the debate devolved into the kind one otherwise hears about the UN Human Rights Council, a forum no one mistakes for a serious effort to advance human rights. If other countries are going to sit around discussing the climate, shouldn’t we at least attend? This is what Millennials might call the “FOMO” (Fear of Missing Out) defense.

Further, as Stern argued, “withdrawing from the Paris agreement would be a stain on the legacies of both the president and Secretary of State.” Other countries “would see withdrawal as a slap in the face.” But on which president’s legacy is Paris a stain? The Constitution requires the Senate to ratify treaties by a two-thirds supermajority in part to ensure that the United States speaks with a single, consistent voice on the international stage. It was President Obama who offered the world an unwise commitment for which he got nothing in return. It was Obama who refused to submit that commitment for Senate approval because he knew he did not have it.

Trump can reverse his predecessor’s mistake. Withdrawing from the Accord through a Senate vote would make clear that Obama should never have signed in the first place. It would establish the precedent for seeking Senate approval of any such commitments in the future. And if, on behalf of our constitutional republic and common sense, we insult other partygoers? Perhaps we can send a card. 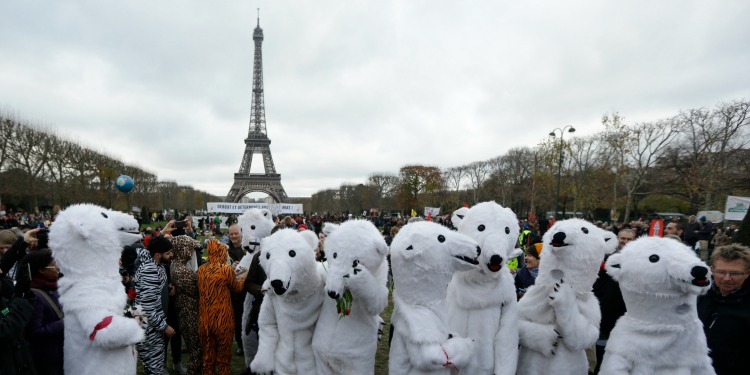