In Saturday’s Republican debate, Donald Trump, in discussing the Iraq war, accused President George W. Bush and his administration of lying to get the United States into the Iraq war.

That charge itself is a lie or, at minimum, a libel, and quite an extraordinary one at that. I’ll provide evidence to defend that assertion and then offer thoughts of what to make of it.

Item: The National Intelligence Estimate (NIE) is the intelligence community’s authoritative written judgment on specific national-security issues. The 2002 NIE provided key judgments, including this one: “Iraq has continued its weapons of mass destruction (WMD) programs in defiance of U.N. resolutions and restrictions. Baghdad has chemical and biological weapons as well as missiles with ranges in excess of U.N. restrictions; if left unchecked, it probably will have a nuclear weapon during this decade.”

Item: According to the report issued by the Silberman-Robb Commission, a panel created in 2004 to investigate what went wrong, a major intelligence failure led to the wrong pre-war assessments of Iraq’s WMD. “The notion that Bush lied about intelligence to get [us] into war,” Judge Silberman said, “is an absurd and outrageous libel.” According to the report, the President’s Daily Brief (PDB) and the Senior Executive Intelligence Brief “were, if anything, more alarmist and less nuanced than the NIE.” The report also said, “the Commission found no evidence of political pressure” to alter intelligence findings. “Analysts universally asserted that in no instance did political pressure cause them to skew or alter their analytical judgments,” according to the report.

Item: The intelligence in the PDB was not “markedly different” from that given to Congress. This helps explains why Hillary Clinton said in 2002, “In the four years since the inspectors, intelligence reports show that Saddam Hussein has worked to rebuild his chemical and biological weapons stock, his missile delivery capability and his nuclear program.” It’s why John Kerry, in voting to give the president the authority to use force, said, “I believe that a deadly arsenal of weapons of mass destruction in his hands is a threat, and a grave threat, to our security.” And it’s why Senator Edward Kennedy said, “We have known for many years that Saddam Hussein is seeking and developing weapons of mass destruction.” Other Democrats who said Saddam Hussein had weapons of mass destruction include Bill Clinton, Al Gore, Harry Reid, Carl Levin, Robert Byrd, Barbara Boxer, Jay Rockefeller, Bob Graham, Dick Gephardt, Henry Waxman, and many more.

Item: On December 21, 2002, then-CIA director George Tenet and his top deputy, John McLaughlin, went to the White House to brief President Bush and Vice President Cheney on Iraq’s weapons of mass destruction. When the president pressed Tenet on the quality of the intelligence, the CIA director reassured the president that “it’s a slam dunk case” that Saddam had weapons of mass destruction.

Item: Then-Secretary of State Colin Powell, hardly a neo-conservative war hawk, spoke before the United Nations on February 5, 2003. In preparing his speech, Secretary Powell and his staff spent several days and nights at CIA headquarters to ensure his claims about Saddam’s WMD were accurate. He knew if he were wrong, his reputation would be gravely damaged. Secretary Powell gave a speech he believed to be true. In it, he claimed, “the gravity of this moment is matched by the gravity of the threat that Iraq’s weapons of mass destruction pose to the world.”

Item: The list of those who claimed Saddam Hussein has WMD included leading political figures from around the world, including the prime ministers of Britain, Denmark, Hungary, Italy, Poland, Portugal, Spain, and the president of the Czech Republic.

Item: Intelligence agencies from around the globe believed Saddam had WMD. In fact, even foreign governments that opposed his removal from power believed it. For example, just a few weeks before Operation Iraqi Freedom, Wolfgang Ischinger, German ambassador to the U.S., said, “I think all of our governments believe that Iraq has produced weapons of mass destruction and that we have to assume that they continue to have weapons of mass destruction.” For Mr. Trump’s conspiracy theory to be true, then, it must not only have been bipartisan and intergovernmental in its reach and scope; it must have been international and very nearly intergalactic.

Item: President George W. Bush is a man of tremendous personal integrity, honesty, and decency. Donald J. Trump is not.

As many others have pointed out, the claim by Mr. Trump that President Bush and his administration lied in order to go to war in Iraq is a claim that over the years has been made by the loopiest people on the left – individuals like Michael Moore and organizations like MoveOn.org, Code Pink, and the Democratic Underground. What Trump is asserting is a grotesque claim, among the worst charges that can be made against a president. And as we have seen, the charge itself is a lie, and not even a particularly difficult one to disprove. But it is the kind of thing we have come to expect from the former reality television star. (He also advocated impeaching President Bush.)

Donald Trump long ago began to say unhinged things. Some of us were warning about him for some time. “Thanks to Donald Trump,” I wrote in the Wall Street Journal in 2011, “a fringe conspiracy theory is now front and center in American politics: the claim that President Barack Obama might not be a natural-born American citizen.” Here’s how I concluded:

When prominent figures in a party play footsie with peddlers of paranoia, the party suffers an erosion of credibility. While certain corners of a party’s base might be energized by conspiracy theories, the majority of the electorate will be turned off by them. People are generally uneasy about political institutions that give a home to cranks.

In self-governing societies, there have to be unwritten rules by which we abide. Among them is that we accept the outcome of elections and keep our public debates tethered to reality.

From time to time people emerge who violate these unwritten codes. They delight in making our public discourse more childish and freakish, focusing attention on absurdities rather than substantive issues, and stirring up mistrust among citizens. When they do, those they claim to represent should speak out forcefully against them.

It is more urgent than ever that Republicans speak out against Donald Trump, even – no, especially – if he’s the front-runner. People, including my fellow Evangelical Christians, can no longer pretend not to know what kind of man we are dealing with here: demagogic, narcissistic, destructive, cruel and corrupting.

Whether or not Mr. Trump wins the Republican nomination, I don’t know. But here’s what I do know: Republicans and conservatives who support Trump or still refuse to speak out against him are failing their responsibility at a key political and moral moment. They are also inviting the disfigurement and destruction of their party.

Donald Trump is a menace unlike any we have seen. 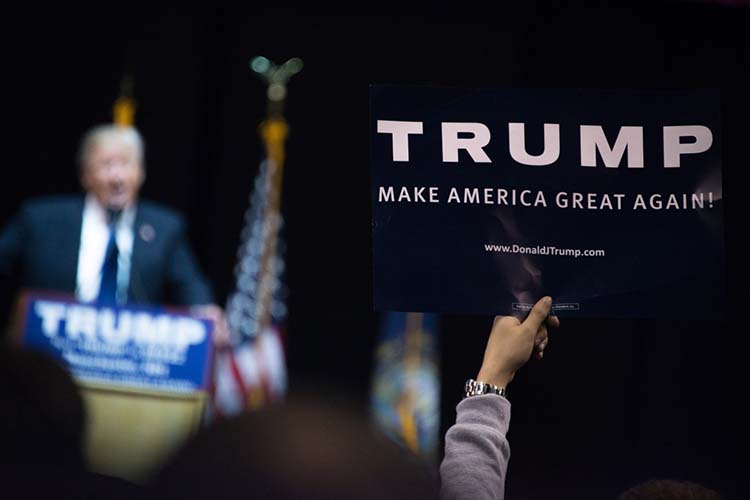