It tells you something about the desperate state of the Republican Party that Donald Trump’s speech last night — an inoffensive (because it was non-racist) and pedestrian set of remarks, which primarily focused on his fiercely protectionist views — would elicit such relief, praise, and hope. Pro-Trump commentators were telling us how it was evidence that he has turned the page, that he was showing he can be “presidential,” and that he will, at last, reassure people. We are seeing the New Trump, and he is leaving his divisive and bigoted ways behind.

Republicans have just endured several brutal days in which the news was dominated by Donald Trump’s repeated, racially-tinged attacks on Judge Gonzalo P. Curiel, declaring that the “Mexican” judge — he was actually born in Indiana — had an “inherent conflict of interest” because of his ethnicity. This is, as Speaker Paul Ryan said, a textbook example of racism, and it’s created panic among Republican lawmakers, who see both their prospects and their party being pulled down by Trump.

It’s probably worth putting Trump’s attacks against Judge Curiel in context, which come after he declared that most of the Mexicans coming across the border are drug dealers and rapists; denigrated John McCain’s POW ordeal; mocked a reporter with physical disabilities; obsessively attacked Fox News’s Megyn Kelly and referred to her as a “bimbo”; likened Ben Carson’s “pathology” to that of a child molester; re-tweeted an unflattering picture of Heidi Cruz; suggested that Rafael Cruz was involved in the assassination of President Kennedy; incited violence among his supporters; hesitated in distancing himself from David Duke; and… well, you get the point.

Yet Republicans continue to insist that Trump will change. He’s learned, we’re told. He’s really a pragmatist who will adjust his ways to appeal to a national audience. All of what we’ve seen is a performance, which Trump can turn on and off whenever he wants.

The problem, of course, is that Mr. Trump has shown no ability over the course of the last year to control himself, to check his worst impulses, or to contain his hatred. He has a serious anger management problem, and having won the Republican nomination, he sees no reason to change. In fact, he’s repeatedly told us he won’t. I’ve said before that asking Trump not to lash out is like asking a scorpion not to sting. It’s what they do. It’s what he does.

Yet Republicans continue to hope that Trump will become a dignified, decorous figure. He won’t, and it’s delusional to believe he will. It is akin to believing the alcoholic who says, after a night of binge drinking, he’s taken his last drink and he’s swearing off alcohol. He may want to, but he won’t be able to. In the case of Mr. Trump’s attacks, it’s not even clear he wants to alter his ways. After all, he seems to relish treating people in a cruel and demeaning manner. It certainly comes more natural to him than, say, discussing public policies or articulating a governing agenda.

I’ll add this: Even is Trump were able to change his way, it’s clear it would all be for show. We’ve seen enough over the last 12 months, to say nothing of over his adult life, to know what kind of figure we’re dealing with.

Trump has not yet officially become the Republican nominee. There are still five months to go before the election. So this drama — Trump saying something offensive, Republicans blanching, and then reassuring themselves that the New Trump will emerge — will play itself out again and again between now and November 8th. And each time it does, a little more of the Republican Party will die. 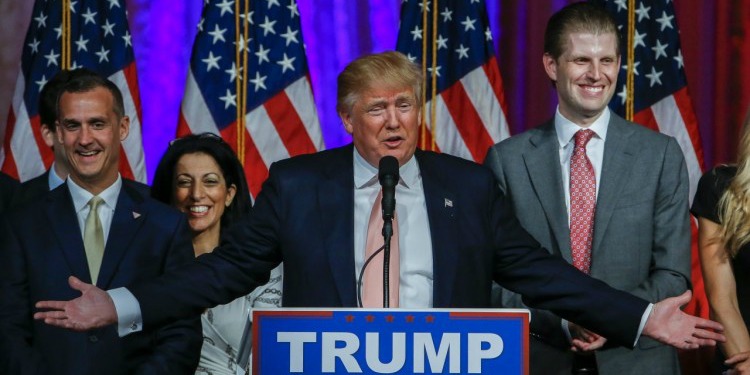