“If Donald Trump secures the Republican presidential nomination, he would start the general election campaign as the least-popular candidate to represent either party in modern times.”

The Democratic pollster Peter Hart said voters’ views of Trump are “exceptionally rancid.” He added, “In terms of any domestic personality that we have measured, we’ve never seen an individual with higher negatives.”

In a head-to-head match-up with Hillary Clinton, who herself is a very weak candidate, Mr. Trump is trailing by double figures.

In its front-page story analyzing the electoral map, the New York Times reports that if “[Trump] survives a late revolt by his rivals and other leaders to become the party’s standard-bearer in the general election, the electoral map now coming into view is positively forbidding.” It has plenty of evidence to support that assertion.

In recent head-to-head polls with Mrs. Clinton, Mr. Trump trails in every key state — including Florida and Ohio — despite her soaring unpopularity ratings with swing voters. And in Democratic-leaning states across the Rust Belt, which Mr. Trump has vowed to return to the Republican column for the first time in nearly 30 years, his deficit is even worse: Mrs. Clinton leads him by double digits in Wisconsin, Michigan, and Pennsylvania.

Mr. Trump is so negatively viewed, polls suggest, that:

…he could turn otherwise safe Republican states, usually political afterthoughts because of their strong conservative tilt, into tight contests… without an extraordinary reversal — or the total collapse of whoever becomes his general-election opponent — Mr. Trump could be hard-pressed to win more than 200 of the 270 electoral votes required to win.

Here’s more ominous news for Republicans to be gleaned from the story:

“There is no precedent for this,” said Neil Newhouse, a veteran Republican pollster. “In the modern polling era, since around World War II, there hasn’t been a more unpopular potential presidential nominee than Donald Trump.”

“We’re talking about somebody who has the passionate devotion of a minority and alternately scares, appalls, angers — or all of the above — a majority of the country,” my Ethics and Public Policy Center colleague Henry Olsen told the Times. “This isn’t anything but a historic election defeat just waiting to happen.”

The Times story explains why the so-called missing white voters who skipped the 2012 presidential election are hardly grounds to encourage Republicans. For one thing, the actual number of missing white voters is quite low in the closely contested states, where turnout remained high or even rose in 2012. In addition, “there is scant evidence that white voters who did stay home would be inclined to support Mr. Trump. In fact, they were far younger and much more likely to be registered Democrats than the white voters who did turn out, according to the census and data from L2, a nonpartisan voter file vendor.”

Mr. Trump’s supporters will undoubtedly comfort themselves with the fact that Ronald Reagan trailed Jimmy Carter by a significant margin months before their election and won, forgetting that (a) Mr. Trump is no Ronald Reagan, one of the most gifted politicians of the 20th century; (b) the Republican Party rallied behind Reagan in a way it will not do for Trump if he’s the nominee; and (c) the nation is dramatically different demographically today than it was in 1980. It was far easier for a Republican to win the presidency then than it is today. (Non-white voters comprised only 12 percent of the electorate in 1980; this year, the estimate is they will comprise 30 percent. In 2012, the Republican nominee won only 17 percent of the non-white vote.)

The Republican pollster Whit Ayers pointed out that “a Republican nominee who hopes to win a majority of the popular vote in 2016 must gain either 30 percent of the nonwhite vote or 65 percent of the white vote… Trump doesn’t stand a chance of doing either one.” How in the world could Trump reach 65 percent among whites overall if more than two-thirds of white women give him an unfavorable rating today, and if most of that unfavorable rating is intensely negative, Ayers asked? He added that millennials have now passed Baby Boomers to become the largest generation – and Trump’s ratings among millennials are now 18 percent favorable to 80 percent unfavorable, with 70 percent strongly unfavorable.

A Trump nomination would be an epic political mistake for the GOP. If Republicans end up nominating Donald Trump to be their standard bearer, he will shatter their party.

Which raises this question: Will the GOP suicide march continue? 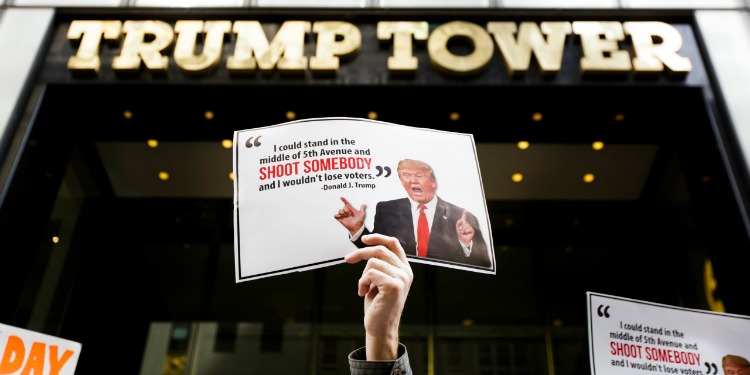