Exactly one year ago, on February 25, 2015 – four months before he declared his candidacy – Donald Trump was interviewed by Hugh Hewitt, who asked him about his tax returns. Trump promised he would release at least one on the day he declared:

HH: On the day you declare, how many years of tax returns will you release?

DT: Well, I’d certainly go over tax returns, and I will tell you nobody knows the tax return business or world better than me. And you have to understand [blah, blah, blah for 77 irrelevant words].

HH: Would you release tax returns, though?

DT: I would release tax returns, and I would also [blah, blah, blah for 163 words about a different subject].

HH: I got it, but I want to stay focused on the tax returns. How many years back?

DT: So the answer is yeah, I would do it.

HH: How many years back would you go on the day you announce? Three? Five?

DT: Oh, I don’t know. I mean, I actually have not even thought of that, but I would certainly show tax returns if it was necessary.

HH: At least a couple of years?

DT: Well, what have they been doing? They’ve been really doing one year, other than people that never made anything. … But we’ll take a good, strong look at that, Hugh. I mean, it’s obviously not something I thought of, but you know, I’ve given any real thought to, but I have no objection to certainly showing tax returns.

Trump released no tax returns on the day he declared his candidacy.

Having now had a year since the interview (and eight months since declaring his candidacy) to take a good, strong look at it, and having no objection to certainly showing his tax returns, Trump nevertheless told Hewitt three days ago that … he had asked his people to start looking at it “the other day” (a month ago, he said they were working on them “now”). In Monday’s interview, this was the colloquy:

HH: [W]hen do we get tax returns, Donald Trump, because Mitt Romney got killed on this four years ago. And you’ve got to get them out there as well.

HH: Will we get them soon, do you think?

So Trump’s current position is he will “probably” release his returns, “at some point,” but he doesn’t know if it will be “soon,” and he’ll have to ask his accounting people.

Actually, Trump has been “thinking about” releasing his tax returns for much more than a year. Nearly five years ago, on April 18, 2011, he was interviewed by George Stephanopoulos – at a time when Trump was considering a run for the 2012 presidential nomination and ranked second in the polls – and told Stephanopoulos he would “love to give my tax returns,” although he might make the release conditional:

Earlier that month, Trump had told CNN that he sent a team of investigators to Hawaii who “have been studying it and they cannot believe what they’re finding.” A week after the Stephanopoulos interview, the White House released President Obama’s long-form birth certificate. But Trump never released his tax returns, much less what his investigators could not believe they were finding.

Mitt Romney released his own tax returns in January 2012, so Trump has not only failed to release his returns when he promised but is behind the schedule Romney followed four years ago for his own “very complex papers.”

Hugh Hewitt will be one of the questioners in tonight’s Republican presidential debate. Perhaps he will mark the one-year anniversary of Trump promising to release his tax returns – and the three-day period Trump has had to consult his accountants — by asking if he is going to keep the returns hidden until after the 27 primaries and caucuses scheduled between now and March 15. 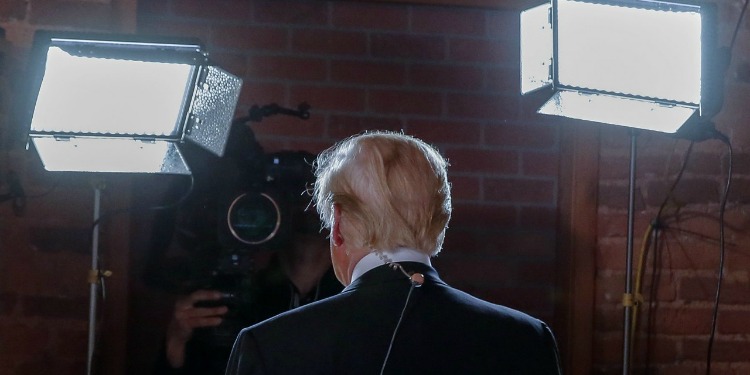