Yesterday, Secretary of State Kerry issued a press statement entitled “First Anniversary of the Attacks in Paris,” which he described as “the January 7-9, 2015, attacks that took the lives of 17 people.” He said the legacy of the victims “endures as a challenge and inspiration to all of us” and noted that “Charlie Hebdo continues to publish.”

Kerry did not describe the attackers; not even the word “terrorist” appears in his statement, much less “Islamist.” Nor did Kerry refer to the place where four of the 17 people – all Jews – were murdered just before Shabbat a year ago: the Hyper Cacher kosher supermarket. Kerry did not note that Hyper Cacher, like Charlie Hebdo, continues in business; it reopened in March 2015, with French Interior Minister Bernard Cazeneuve in attendance to commemorate the opening.

Three days ago, French President Francois Hollande launched the official commemorations of the one-year anniversary of the terrorist attacks by unveiling a memorial plaque outside the market. You don’t have to speak French to understand the inscription: “A la Memoire des Victims de L’Attentat Antisemite du 9 Janvier 2015 … Ils Sont Morts Victimes du Terrorisme.”

Kerry’s brief statement concluded that “[w]e must remain committed to protect each other and renew our determination to turn this moment of profound loss into a lasting commitment.” He did not give any details regarding the commitment, but perhaps it goes without saying that the Department supports common-sense gun control to prevent random shootings of folks in a deli, and is ready to send James Taylor if it happens again. 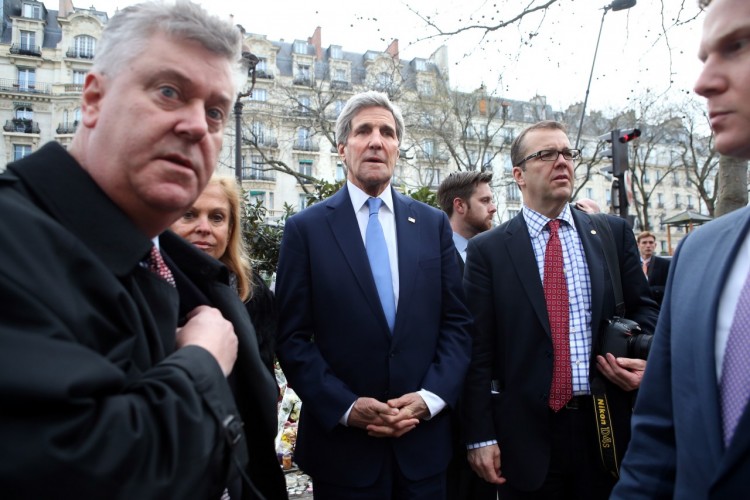 Rick Richman is the author of Racing Against History: The 1940 Campaign for a Jewish Army to Fight Hitler (Encounter Books 2018).