In the midst of all of the challenges of 2020, the loss of Richard Schifter in October at the age of 97 was sadly overlooked. A lawyer by training, he served his country from 1981 to 2001, working for presidents from both parties, and in his steadfast, direct, facts-focused way, fighting for freedom and human rights around the world. His work took him from the halls of the United Nations to the Department of State and the National Security Council. Not as well-known as other diplomats and never demanding media recognition, Schifter, who was a family friend, was a tireless advocate for freedom fighters. From China and the USSR to Somalia and Liberia, his dedication to helping others made him an exemplar of American statesmanship.

In the early 1980s, he represented the American delegation to the United Nations as the U.S. Representative to the UN Commission on Human Rights and as Deputy U.S. Representative to the UN Security Council. In 1985, after serving at the UN for five years, he was appointed assistant secretary of state for human rights and humanitarian affairs by President Reagan. Using the bureau’s annual report on human rights practices around the world, Schifter helped shape American strategic policy and stood up to some of the world’s most notorious human rights abusers.

As the Soviet Union began to falter, he helped Jewish refuseniks leave for freer lands. His work was instrumental in persuading Soviet officials to loosen emigration restrictions and allow hundreds of thousands of refugees to seek religious freedom around the world. In 1989, in the wake of Tiananmen Square, he fought to toughen America’s stance towards China. In his later work with non-profits, he served as a powerful advocate for those struggling in Bosnia, Somalia, and Liberia.

For all his achievements, his aspirations remain unrealized in one important case concerning Israel. Despite his efforts, every year, the UN still pushes for completely unrealistic, outdated resolutions that stand in the way of a lasting peace in the Middle East. The United Nations General Assembly is still passing annual resolutions to renew the mandates of the Committee on the Exercise of the Inalienable Rights of the Palestinian People and the Division for Palestinian Rights. Among other biased and anti-Israel agenda items, these entities, endorse the so-called “right of return” which has long hampered negotiation and ossified opposition on both sides of the conflict.

If fully implemented, these mandates would allow five million Palestinians and their descendants, wherever they are, to immigrate to Israel, receive citizenship, and claim disputed property or compensation from the Israeli government. Setting aside the unprecedented notion of an ever-growing refugee population in Israel, many would have no ties to Israel or the Palestinian territories. Any one of these provisions would irreparably alter Israeli society, culture, and politics. They would jeopardize also Israel’s special dual nature as both a Jewish and democratic state— the very same features described by American-Israeli author Yossi Klein Halevi as Israel’s “two non-negotiable identities.” This threat to the Jewish state could never be accepted by the Israeli people.

As Chairman of the American Jewish International Relations Institute, Schifter dedicated the last years of his life to fighting these resolutions. And he was making headway. Within the last decade, support for the UN’s Division for Palestinian Rights has diminished considerably. In 2011, the resolution was approved by a 114-9 vote. Last year, it was carried by a tally of just 82-25 with 53 abstentions and 32 absences (deliberate ones mostly). Though these measures still pass, they do so with mere pluralities instead of overwhelming majorities. This is considerable progress.

Schifter believed that these symbolic resolutions are impediments to peace. And if the last few months have taught us anything about the Middle East, it’s that progress is possible. For all its flaws, the Trump administration made significant strides in the decades-long pursuit of Middle Eastern peace by brokering landmark deals across the region. Once unthinkable, Jewish weddings are being celebrated in the shadow of Dubai’s Burj Khalifa, and Arab start-ups are flocking to Tel Aviv. The Abraham Accords and subsequent treaties have brought Israel together with former foes like the United Arab Emirates, Bahrain, Sudan, and Morocco. These agreements, which have normalized diplomatic relations and strengthened economic ties, have undeniably promoted peace and prosperity in the region.

This moment calls for the Biden administration to take an important next step. Biden’s incoming appointees have an opportunity to craft a lasting settlement in the Middle East, something Schifter would have liked. But doing so requires new thinking. The time has come for the administration to stop relying on the same strategies that have led to decades of gridlock and violence. It’s time for the State Department to make it a priority for the UN to reject these resolutions and encourage our allies to help us make that happen.

Robert Doar is president of the American Enterprise Institute. 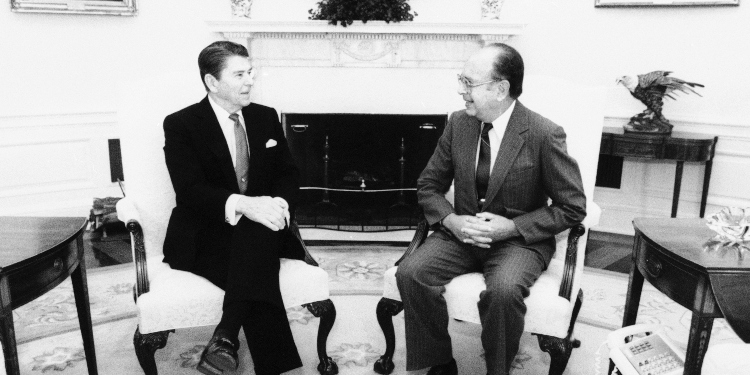 Robert Doar is the president and Morgridge Scholar at the American Enterprise Institute.