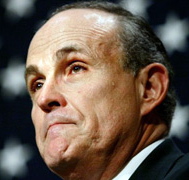 Every year around this time, as the anniversary of 9/11 approaches, I re-read Time Magazine’s 2001 Person of the Year profile of Rudy Giuliani. This year, when I read it again, I found it easier to understand how as an undeclared candidate Giuliani still polls at nearly 10 percent nationally. And when I watched as our current mayor, Giuliani’s successor, did his best to look awake during press conferences about Hurricane Irene, I found it easier still.

It’s difficult to quantify the concept of “leadership.” It’s one of the reasons Giuliani had such a rough time gaining traction as a national candidate in 2008, especially since he was running seven years after the attacks. Rick Perry can talk about the jobs created in Texas during his tenure; Mitt Romney can point to executive experience with direct relevance to the country’s current challenges. But if Giuliani mentions his executive experience, he will have the “noun-verb-9/11” joke thrown in his face, as Joe Biden did in 2008. (Incidentally, I have always found it unsettling that a man who thinks 9/11 is a punch line has become our vice president.) The Person of the Year article, written by Eric Pooley, begins with this:

Sixteen hours had passed since the Twin Towers crumbled and fell, and people kept telling Rudy Giuliani to get some rest. The indomitable mayor of New York City had spent the day and night holding his town together. He arrived at the World Trade Center just after the second plane hit, watched human beings drop from the sky and — when the south tower imploded — nearly got trapped inside his makeshift command center near the site. Then he led a battered platoon of city officials, reporters and civilians north through the blizzard of ash and smoke, and a detective jimmied open the door to a firehouse so the mayor could revive his government there. Giuliani took to the airwaves to calm and reassure his people, made a few hundred rapid-fire decisions about the security and rescue operations, toured hospitals to comfort the families of the missing and made four more visits to the apocalyptic attack scene.

At 2:30 a.m., Giuliani finally got home. Since he couldn’t sleep, he watched the day’s events again on TV while reading the latest biography of Winston Churchill. Instead of scoffing at the comparison, Pooley runs with it. “There is a bright magic at work when one great leader reaches into the past and finds another waiting to guide him,” he wrote. Giuliani was impressed with the people of his city, and believed they deserved a leader to match them. The Churchill he looked to was the Churchill of 1940, during the Blitz.

With the President out of sight for most of that day, Giuliani became the voice of America. Every time he spoke, millions of people felt a little better. His words were full of grief and iron, inspiring New York to inspire the nation. “Tomorrow New York is going to be here,” he said. “And we’re going to rebuild, and we’re going to be stronger than we were before…I want the people of New York to be an example to the rest of the country, and the rest of the world, that terrorism can’t stop us.”

The country still seems to be grateful for Giuliani’s leadership. (This week’s New York Magazine encourages “giving him his due,” and reminds readers that “Giuliani, showing what a leader is supposed to do in a crisis, did more than any single person to keep us together.”)

In politics, the American memory rarely contains more than fleeting moments and evanescent passions. But Giuliani’s heroics appear to be the exception that proves the rule. It doesn’t seem nearly enough, 10 years later, to get him elected president. But his leadership during that time shouldn’t be dismissed, either. America’s Mayor consistently gets about 10 percent of the vote–again, a decade later, and again, as an undeclared candidate. It isn’t the base of a presidential campaign, but it just might be America’s way, in whole or in part, of saying thank you–of saying: some things, we don’t forget.