Yesterday Chris Christie raised some eyebrows when he told the Conference on the Americas, “I do think that we need to take another look at NAFTA,” referring to the North American Free Trade Agreement. That agreement was a signature achievement of the Clinton administration and the Gingrich Congress. Christie’s rhetoric is empty: there’s no way he, if he somehow became president, would undo a two-decade-old signature free-trade agreement. But in saying he’d even take another look at it, Christie was exposing the divide between rank-and-file Republicans and their elected leaders on the value of free trade.

Republicans are often thought of as reflexively supportive of free trade, in large part because the GOP’s congressional caucus is pro-trade and currently trying to get a deal through Congress that would give President Obama broad authority to negotiate the Trans-Pacific Partnership. But is the GOP really the party of free trade?

According to Gallup, 61 percent of Democrats see trade more as an opportunity for economic growth than as a threat to the domestic economy from imports. For Republicans, that number is 51–barely a majority. Independents are at 61 percent with the Democrats.

Is this a function of partisanship, and a sign that Republicans just don’t trust Barack Obama to negotiate a trade agreement that would be good for the economy as much as they might trust a Republican president? To a degree, possibly. But what jumps out about the historical trend since 2001 is the relative stability of the Republican stance on trade. Here’s Gallup’s chart: 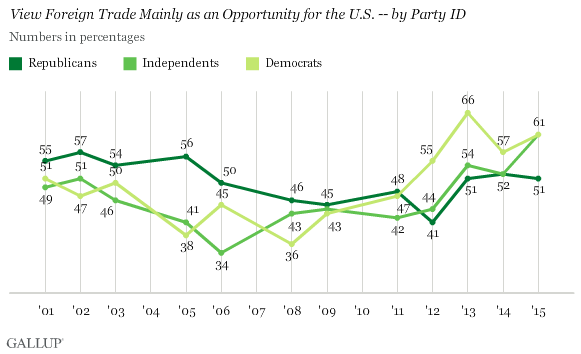 As you can see, Republicans started the George W. Bush administration at 55 percent on the pro-trade side. They’re only down four percent now in Obama’s second term.

Of course there were fluctuations. Discounting election years (I’ll come back to that), Republicans hit a high of 57 during the Bush years and a low of 45 in Obama’s first year. Democrats hit a high of 66 in 2013 and a (non-election year) low of 38 during the Bush years. It would appear that partisanship plays a role here, but Democrats seem far more partisan in their views on trade than Republicans.

The economy is also a likely factor in the waxing and waning of support for free trade. So are election years, and the populist rhetoric that comes with them. In 2008, Democratic support for trade dropped to 36 percent, amid both the economic downturn and their party’s candidate, Barack Obama, threatening to renegotiate NAFTA (see a pattern?). Obama’s staff apparently told concerned Canadians that Obama wasn’t telling the public the truth, but he felt he had to play to the economic anxieties and overall economic ignorance of his party’s base.

Republicans haven’t dropped as low as Democrats did in 2008, but they hit a low in 2012, a presidential election year when their own candidate, Mitt Romney, was threatening trade sanctions against China. That’s when Republicans dropped to their low of 41 percent. Romney’s rhetoric was silly, but quickly forgotten: Republican support for free trade jumped ten points after Obama’s reelection, and hasn’t dropped below 51 since.

The election-year aspect to this, however, raises an important issue. The rhetoric politicians use can drive public opinion on trade, especially among their own party. And yet the consensus among economists has long been in favor of trade. (Where are those “consensus”-loving Democrats when you need them?) “For more than two centuries economists have steadfastly promoted free trade among nations as the best trade policy,” as Alan Blinder notes. “Despite this intellectual barrage, many ‘practical’ men and women continue to view the case for free trade skeptically, as an abstract argument made by ivory tower economists with, at most, one foot on terra firma.”

In a 2011 paper for the Cato Institute, Daniel J. Ikenson and Scott Lincicome made the case that poor public persuasion was partly to blame. They write:

Most Americans enjoy the fruits of international trade and globalization every day: driving to work in vehicles containing at least some foreign content, relying on smart phones assembled abroad from parts made in multiple countries (including the United States), having more to save or spend because retailers pass on cost savings made possible by their access to thousands of foreign producers, designing and selling products that would never have been commercially viable without access to the cost efficiencies afforded by transnational production and supply chains, enjoying fresh imported produce that was once unavailable out of season, depositing bigger paychecks on account of their employers’ growing sales to customers abroad, and enjoying salaries and benefits provided by employers that happen to be foreign-owned companies.

The presidential campaign trail is a playground for protectionists. This could be something of a chicken-and-egg problem: what came first, the protectionist sentiment among voters to which politicians feel the need to pander, or the protectionist rhetoric that inspired trade skepticism among the public?

Either way, presidential campaign protectionism is often treated with surprise when voiced by Republican candidates. It shouldn’t be: there is no overwhelming consensus in either party in favor of free trade. The Republicans’ congressional free traders are right on the merits and perhaps they can help turn the tide of public opinion toward the economic consensus. But as long as presidential candidates play on the anti-trade instincts of so many voters, that’s unlikely to happen.