A now-infamous political cartoon shows a young girl kneeling at her bedside and beseeching God to “forgive my angry, lying, alcoholic father for sexually assaulting Dr. Ford.” The little girl in the picture, by syndicated cartoonist Chris Britt, is Judge Brett Kavanaugh’s 10-year-old daughter, Liza. In Britt’s demented political imagination, even Kavanaugh’s daughter must testify against her father—in secret, before the Almighty.

A USA Today news story under a reporter’s byline argued: “The U.S. Senate may yet confirm Kavanaugh to the Supreme Court, but he should stay off basketball courts for now when kids are around.” The article by Erik Brady thus insinuated that Judge Kavanaugh is a pedophile, though he has never been accused of that heinous perversion, while the accusations of sexual assault against him remain unproven, uncorroborated, unsubstantiated.

Carol Christine Fair, the Georgetown University political scientist, raged on Twitter against “entitled white men justifying a serial rapist’s arrogated entitlements. All of them deserve miserable deaths while feminists laugh as they take their last gasps. Bonus: we castrate their corpses and feed them to swine? Yes.” The Jesuit university coolly defended Fair’s free speech, though one wonders if that equanimity would hold were the professor conservative and male.

What is going on here?

Britt, Brady, Fair, and many other Kavanaugh opponents in mainstream liberal institutions are engaging in a brand of politics that denies fairness, courtesy, and dignity to the enemy. In the eyes of those who would destroy his nomination, Kavanaugh and his family are no longer human beings, if they ever were. Instead, they stand in for every social evil, every unearned privilege, every “structure of oppression,” every historical injustice. The Kavanaughs are political demons.

This is the politics of dehumanization, in other words. Its prevalence today, particularly in elite liberal circles, forebodes much ill for the American future. The dehumanization of Kavanaugh reveals a society where many bonds of civic friendship have frayed while others have snapped altogether.

We are beyond the Belmont/Fishtown divisions described by Charles Murray in his book Coming Apart. Murray described communities living in relative geographic proximity but sharing little by way of cultural tastes, patterns of marriage and education, or a common life. But judging by the Kavanaugh affair, we now have two radically opposed communities, and one of the two views the other as so evil and irredeemable as to authorize any and all means for political combat.

The other side—whether you consider it Fishtown or the Jacksonians or some combination of these political and cultural forces—isn’t going to sit pretty. It has already erected a defensive barrier in the form of Donald Trump (that’s how I increasingly see the 45th president), and its fighting spirit is far from exhausted. And the Jacksonians/Trumpians have done their share of dehumanizing over the past two to three years.

This could all get uglier than most of us can imagine.

Is there a way out, a way back to civic friendship? If there is, it will have to start with re-humanizing each other. My friend Mark Dubowitz of the Foundation for Defense of Democracies had the right idea, I think. He wrote on Twitter: “This is that time to invite one of your most outspoken opponents on any issue out for lunch. Break bread. Look each other in the eyes. Calmly discuss. Be a mensch. Learn something. I have one scheduled for Friday.”

Amen, amen. Or you might follow Liza Kavanaugh’s lead (the real one, not the grotesque cartoon version): Pray for your enemy. 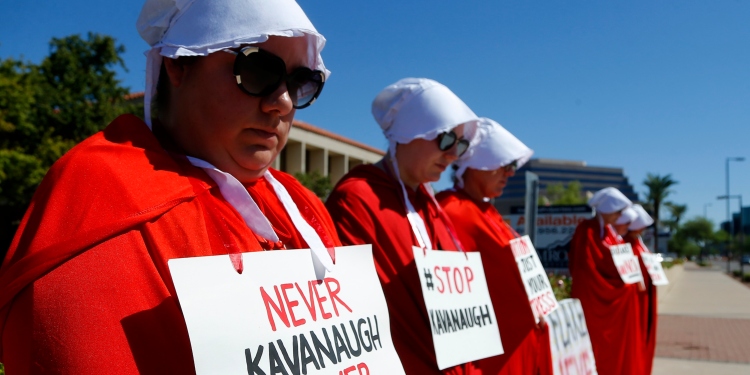