The Brett Kavanaugh drama is approaching its dénouement, which means we can now survey the damage to the institutions that tried to ruin the high-court nominee—his life, his career, his family. That damage is immense.

The next time Donald Trump rails against the “fake-news media,” his words will resonate with a larger share of Americans than they did before most of the mainstream media decided to enlist in the Democrat campaign against Kavanaugh.

The next time there is a critical judicial nomination at stake, congressional Republicans and the broader conservative legal ecosystem will be that much more dismissive of white-shoe gatekeepers such as the American Bar Association.

Likewise, the credentialing mills that shape the worldview of the liberal elite will have that much less credibility among broad swaths of the nation.

Trump didn’t force Ronan Farrow and Jane Mayer to taint the New Yorker’s record for painstaking factual accuracy by publishing Deborah Ramirez’s baseless, uncorroborated allegation about Kavanaugh exposing himself to her. By Farrow and Mayer’s own account, Ramirez took days to meditate on the vagaries of memory and consult her attorneys. That should have been warning enough, never mind the complete absence of firsthand corroboration.

The Ramirez debacle was self-made.

Nor did Trump force Farrow and Mayer to return to the story days later by profiling the Yale alumnus who offered hearsay backup to Ramirez—only to have the alumnus’s own supposed firsthand source deny all knowledge of the alleged incident.

That cock-up, too, was entirely avoidable.

And it wasn’t Trump who dispatched Emily Bazelon—a Yale alumna who had declared her opposition to Kavanaugh’s nomination from day one—to report a ludicrous story about a bar brawl at which the future judge threw ice. No, it was the editors of the New York Times who did that. They gave Bazelon a straight-news byline, though she had a long record of partisan and ideological grandstanding on court issues.

That was a journalistic wound the Grey Lady inflicted on herself.

Which brings us to the ABA and other gatekeepers. It wasn’t Trump who compelled ABA President Robert Carlson, a deep-blue Hillary Clinton supporter, to assail the Kavanaugh nomination in a letter that reeked of partisan animus. This, even though the ABA’s own review committee had given the judge a “well-qualified” rating, its highest. The apparent split between Carlson and his own team made the ABA look foolish, and it authorized conservative legal types to disdain the organization more than they already do.

Finally, there’s the liberal academy. Among those who take the Times editorial page to be an unimpeachable authority on national affairs, it was taken as a matter of tremendous import that 1,700 law professors (and counting!) had signed a letter opposing Kavanaugh’s nomination on account of his temperament. But for normal Americans who understand that a guy might get mad if he’s falsely accused of running a gang-rape ring while in high school, the professors’ letter only underscored the fact that liberal academe is . . . ideologically liberal.

Once he is confirmed to the Supreme Court, Kavanaugh won’t be presiding over cases against himself. The expectation that he should treat rape allegations against himself with the same dispassion expected of a high-court justice reviewing an antitrust matter is facially absurd. As Ramesh Ponnuru argued over at National Review: “To be qualified for the Supreme Court, a judge has to bring an open mind to an inquiry about whether he’s a rapist? I don’t care if the letter gets 6,500 signatures, that line is never going to be persuasive.”

As I say, don’t blame Trump when Americans tune out these institutions. 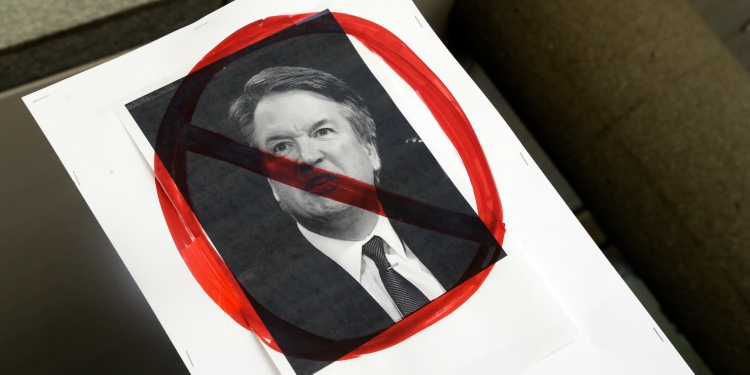