The Kurds have been a people without a state for centuries. Monday’s independence referendum in northern Iraq’s Kurdish zone is an important step toward rectifying this historic injustice, and I believe the U.S. is making a grave mistake by opposing the vote.

The Trump administration announced its displeasure in a September 15 statement, noting that the referendum “is distracting from the effort to defeat ISIS and stabilize the liberated areas.” It added: “Holding the referendum in disputed areas is particularly provocative and destabilizing.” The Kurdistan Regional Government (KRG), the White House said, should work out its differences with Baghdad through dialogue.

Not now, go away, in other words. The statement reflected the sort of rigid adherence to Washington dogma that too often prevents America from seizing the opportunities presented by the tectonic shifts in the Middle East. The Trump administration failed even to nod at Kurdish aspirations, or offer an alternative timeline if the current moment is too inconvenient. This was an unnecessary slap when there are compelling moral and strategic reasons for creating a Kurdish state in northern Iraq sooner than later.

The Kurds got by far the worst treatment during the decades of Baathist rule in Iraq. Saddam Hussein ethnically cleansed tens of thousands of them in the 1970s. Then, in the closing days of the Iran-Iraq War, he set out to destroy the Kurdish community. The regime fired chemical weapons at Kurdish civilians, summarily executed men and boys, and sent entire villages to concentration camps.

President George H.W. Bush’s decision to impose a no-fly zone in 1991 granted Iraqi Kurds protection against Saddam’s depredations and a measure of autonomy. The Kurds used the opening, and the one provided by the 2003 invasion, to develop institutions of self-government. Iraqi Kurds constitute a coherent nation. They stand out in a region full of non-nation-states in various stages of disintegration. Kurds speak a common language, albeit with regional variations. Most are Sunni Muslims, though there are Christians and even a very few Jews among them, as well. They have deep historical ties to their territory. Their culture sets them apart, visibly, from their neighbors. They have distinct national institutions. And they already enjoy quasi-state recognition in the corridors of power in Europe, the Middle East, and beyond.

Iraqi Kurds, moreover, share what Douglas Feith has described as the key subjective factor in nationhood: a “type of fellow feeling” that is “an extension of the affection people tend to have for their family members.” Whatever their tribal differences—and these are real—Kurds living in Erbil or Dohuk today look upon other Kurds, not Iraqis, as their true compatriots. The bonds of Kurdish sympathy are much stronger and more enduring than those of Iraqi nationalism, if the latter means much at all.

Taken together, these factors mean that Iraqi Kurds are ripe for statehood. The Arabs have 22 states, and the Turks, Iranians, and Jews each have one—so why shouldn’t the Kurds enjoy statehood? There is no good answer to this question.

Then, too, Iraqi Kurdistan is vibrant and free. In Erbil today, within an hour’s drive from what used to be the second capital of the ISIS “caliphate,” you can enjoy a beer, surf a largely unrestricted Internet, and criticize the government without having to fear death squads. You won’t hear chants of “Death to America” or “Death to Israel” on the streets. There is corruption in the Kurdistan Regional Government, to be sure, and a degree of political nepotism that would make Jared Kushner and Ivanka Trump blush. But by regional standards, KRG governance is more than acceptable.

An independent Kurdistan, moreover, will bear strategic fruit for the U.S. It could serve as a counterweight, however small, to Iranian hegemony. KRG leaders have taken a moderate, pragmatic line with all of their neighbors. That is wise policy, given the region’s size and strength relative to the likes of Iran and Turkey. Even so, the introduction of a new, fully sovereign Kurdish actor would interrupt Tehran’s so-called Shiite crescent stretching from Sanaa to Beirut. Today Iraq is trapped in the crescent. An independent Kurdistan wouldn’t be. It would irk the mullahs still more if this new state turned out to be a democratic success story. Conversely, by blocking Kurdish aspirations, the U.S. is putting itself in the same camp as Iran.

Most important, friendship should mean something. Iraqi Kurdish forces fought valiantly alongside the U.S.-led anti-ISIS coalition. When the jihadist army seemed invincible, it was Kurdish fighters who stopped its march across Iraq (and Syria). As Kurdish intelligence chief Masrour Barzani told me in 2015, “In this entire area the Kurds are probably the most pro-American people that you can find. Forever we will be thankful for the U.S. support since the day of toppling Saddam’s regime.” 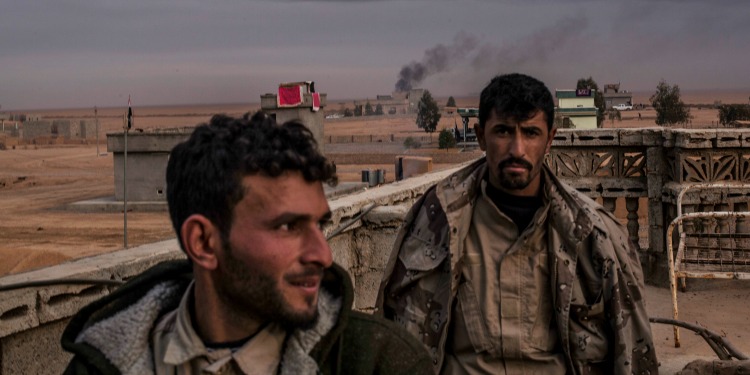