The horrific series of events in Barcelona is yet another macabre example of what is starting to feel like Europe’s new normal. This is the era of frequent, low-tech, mass casualty Jihadist attacks, in which any ideologically driven fanatic can jump in a van or pick up a knife and inflict carnage on the streets of our cities. The former head of Mi5, Lord Evans, has predicted that the battle against this form of terrorism is likely to last for a generation.

Yet there is a certain added grotesque irony to the attacks in Barcelona. This current wave of Islamist terrorism, the so-called leaderless Jihad, has its origins in Spain. When that van sped through Barcelona’s iconic Las Rambles, plowing down innocent pedestrians, the latest incarnation of Jihadism was coming home to roost.

This kind of terrorism, increasingly familiar across Europe, was, in fact, masterminded by a Spaniard. A veteran Jihadist called Abu Musab al-Suri. Formerly part of al-Qaeda, he is understood to have parted with Osama Bin Laden. In 2005, he published what would turn out to be a hugely significant text: “the Global Islamic Resistance Call.” It would be some years before western countries would feel the full effect of the strategy outlined in this document, but it is precisely the tactics developed by al-Suri that have gone on to form the basis of Islamic State strategy and the strategy for the IS inspired attacks that we are now seeing in the West.

Abu Musab al-Suri has had a decades’ long involvement in modern Jihadism, and particularly with Islamist terrorism in Spain. The Spanish authorities have wanted al-Suri since 2003, for his role in establishing the country’s first al-Qaeda cell in the mid-1990s. However, Al Suri’s role in terrorism in Spain goes back to well before this. Spain also wants al-Suri in connection to the 1985 Madrid bombing by the Islamic Jihad Organization, in which a restaurant frequented by US servicemen was blown up leaving 18 people dead. But it is also believed that he may have had a connection to the far more devastating 2004 Madrid train bombing, which killed 191 people.

Al-Suri’s jihadism took him to several conflict zones, including Afghanistan. But his most significant role has been as an ideological mastermind. During the 1990s he spent a stint living in London. From there he was editor of al-Ansar, one of the most important Jihadist magazines the time. His writings would also later be published in al-Qaeda’s Inspire magazine. It has even been suggested that al-Suri was ideologically connected to the 7/7 bombings, given that his writings had specifically encouraged the targeting of the London Underground.

By 2005, however, it seems that al-Suri had become disillusioned with al-Qaeda’s strategy. Its rigid, top-down structure and highly-organized, sophisticated attacks had brought about neither the desired awakening among Muslims nor the Islamist revolution the Jihadists had hoped for. In 2005, al-Suri released his “Global Islamic Resistance Call” onto the internet. Envisaging a leaderless Jihad, in which individuals or small cells would form their own organic and independent plots, they would avoid detection by not linking to a large structured network and instead used the internet to spread ideology and tactics. Crucially, al-Suri’s Jihadist manifesto stresses the importance of ultimately capturing territory to establish an Islamic state. This obscure Spanish extremist had set in motion events that would bring about the wave of terrorism being suffered today.

Al-Qaeda had hoped to function as a vanguard for triggering a much larger Islamist insurgency. But it was the rise of Islamic State in Syria that would eventually turbo charge the vision laid out by al-Suri. Between 2014 and 2016, Islamic State’s prolific spokesman, Mohammed Adnani put out a series of messages to Muslims living in the West, increasingly calling on them not to travel to the Middle East, but to instead carry out attacks in the West using whatever they had available to them; a knife, a car, poison, even a rock if need be. And Adnani told adherents in the West not to wait for instructions, but to take their own initiative and to target civilians. Like al-Suri, IS believe that through attacking civilians in the West, they can eventually bring about a clash in Europe that will rally European Muslims behind them.

In Barcelona, as with the recent vehicular attacks in London and Paris, we are witnessing the adherents of this strategy attempting to get their deranged, but terribly dangerous, plan off the ground. And in a chillingly ironic way, via al-Suri, it is a strategy that traces some of its origins back to Spain. European authorities are now engaged in struggle of trying to prevent any more of al-Suri’s vision from coming to fruition. But as the former head of Mi5 has warned us, it is a generational task we now face, and there can be little doubt that Europe is now caught up amid a new era of Jihad. 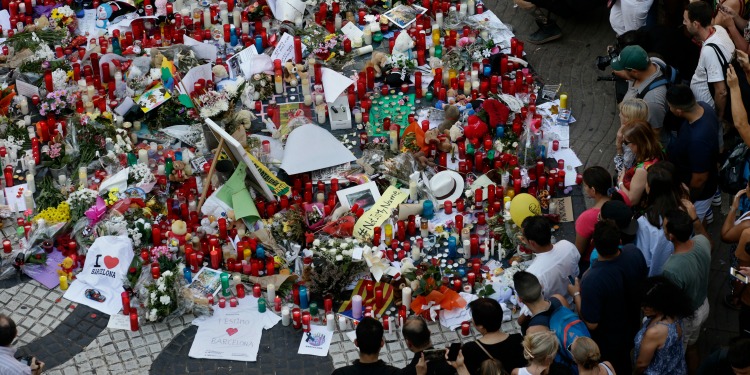