In Israel, a bus driver was attacked, beaten, and escaped miraculously moments before his vehicle was torched by a vicious mob. The blaze raged for more than a half-hour before firefighters showed up. Apartment windows melted from the heat. Without a police escort, firefighters refused to enter the area, due to frequent attacks upon them by the local population.

In the same city earlier in the week, police officers in a car were attacked and the vehicle was smashed with rocks, hammers, and other weapons. Then there was the police officer surrounded the other day by a mob that would not back down, causing the cornered cop, his back against a garbage dumpster, to fire several warning shots from his pistol into the air. After that, police responding to a domestic call were pelted with rocks and garbage, and military police had to be summoned to save them.

This is not a new Intifada. These horrors happened in several cities and towns dominated by ultra-Orthodox Haredim, with the most violent action in B’nei Brak, on the border of Tel Aviv, home to 200,000.

The Haredim are protesting COVID-related emergency laws that require, among other things, all educational institutions to be closed. Throughout the COVID era, the Haredim have flagrantly flouted most corona-related restrictions.

Prime Minister Benjamin Netanyahu has been silent on their anarchic conduct because he cannot survive politically without their support. And their rabbis and leadership cannot survive if they do not keep the yeshivot and kollelim—schools and gathering places for scholars—open.

Yakov Litzman, Minister of Housing and leader of the Haredi United Torah Judaism faction in the Knesset, slammed the police on Sunday night for targeting the Haredi population while, in his view, giving the rest of Israel a free pass on violations. He compared the full-on Haredi disregard for COVID laws to stray “beachgoers” in Tel Aviv. Had Litzman popped over to the beach, he would have seen the constant presence of police patrols ensuring empty sands and surf. Meanwhile, schools and non-essential businesses are closed everywhere in Israel, except what appear to be the autonomous Haredi zones.

Rioters in B’nei Brak and other hardcore towns liken police attempts to enforce Haredi school closures to “Kristallnacht,” and regularly taunt police by calling them Nazis. But it was not until Monday that Netanyahu commented on the Haredi insurrection, saying only that a “heavy hand” would come down on any law-breakers.

But he has done little but speak twice with a 30-year-old man named Yanky Kanievsky, the grandson of a very powerful B’nei Brak rabbi. Since the outbreak of the COVID crisis almost a year ago, Rav Chaim Kanievsky has counseled his flock to defy government ordered school and yeshiva closures. Many have assumed that Yanky, who interprets and communicates his grandfather’s directions, is the one really calling the shots. In photos, the 93-year-old senior Kanievsky appears frail and is propped upright in a wheelchair with difficulty.

The Israeli press mocked Bibi for “pleading” with Yanky to impress upon his grandfather the importance of supporting school and yeshiva closures. The prime minister explained that the senior Kanievsky is a “very busy man,” and that he took no issue with being shunted to his grandson to discuss matters of national importance.

The Haredi population seems unbowed. Virtually all Haredi homes are without television or internet and rely upon their insular press and the all-important pashkvili notices plastered on community boards for any information. If a rabbinical pashkevil encourages civil disobedience, then that is exactly what the people will do.

In Haredi society, Torah study is the most important action. All life is geared to promote and enhance Torah learning. Not even protection of life from sickness, the commandment of pikuach nefesh, trumps Torah—or so it seems among the Haredim in Israel. And any suggestion that COVID justifies a modification of study habits represents a direct threat to the absolute authority of Haredi rabbis. That, in fact, is the real source of tension.

A few stray voices from the Haredi population have been bold enough to speak out, including the Chief Sephardic Rabbi Yitzhak Yosef, who blamed the riots on “delinquents” and demanded that they cease. He said nothing, however, about widespread Haredi civil disobedience.

Most heartbreaking in all of this was the recent statement of a remarkable man, Yehuda Meshi-Zahav. I have come to know him personally over the years; a man who has held fast to his ultra-Orthodox beliefs but has learned to integrate his faith with, dare I say it, reason. Born into the extreme anti-Zionist Yerushalmi sect, Meshi-Zahav learned, through disaster relief work in Israel, how much we all have in common. Almost 40 years ago he founded ZAKA, the organization that ensures that every speck of human remains receives a proper Jewish burial. Tragically, his most important work has been done in the wake of terrorist attacks and, in the last year, with COVID.

Several months ago, wanting to understand in a more immediate way the intensity of Haredi resistance to COVID rules, I asked Yehuda if I could accompany him on a regular staff shift. He refused outright. It was just too dangerous in Haredi neighborhoods. He wasn’t, of course, referring to street crime, but to the widespread refusal to comply with public health measures. He said that if I should contract the virus, he would feel responsible.

On Chanukah, Yehuda’s 80-year-old mother chose to follow her rebbe’s dictates rather than cede to her son’s pleas to cancel a large family gathering. Less than one month later, both his parents and a brother had died from COVID complications. He fears that this may not be the end. “The rabbis have blood on their hands,” Meshi-Zahav railed in publicly released statements.

Yet, on the streets of B’nei Brak on Monday, media crews were often jeered, particularly when caught filming boys and girls in schoolyards. Business as usual.

Comprising a mere 12 percent of the Israeli population, the Haredim account for more than 40 percent of COVID affected. Not a word of apology for the violence was issued by any Haredi leader on Monday, although Rav Kanievsky reportedly invited the attacked bus driver to visit him and receive a blessing.

Haredi Knesset ministers once again brought Netanyahu to his knees on Monday, getting him to backtrack on his commitment to dramatically increase fines for COVID law violations—a mere fraction of the cost to society resulting from their reckless conduct. 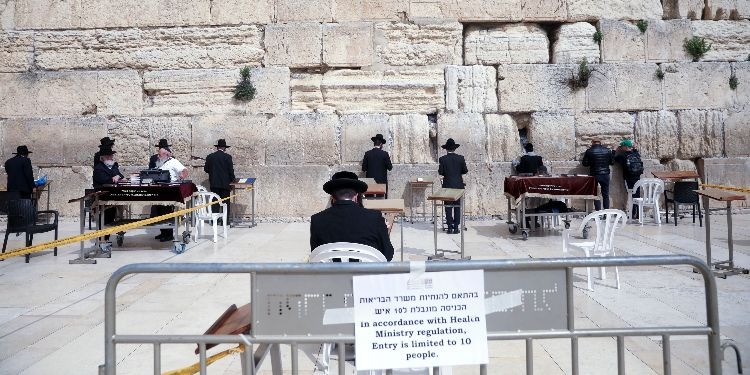