As it happens, the shooting of two rockets from Gaza at Tel Aviv last Thursday was all a mistake. Or so we are to believe.

Shortly after 9 pm, sirens wailed in the coastal city. Iron Dome missiles intercepted one with a loud “boom” heard everywhere; the second, people joke, is still circling the city looking for a parking spot.

Aiming rockets at Tel Aviv, Israel’s business and cultural capital, is a statement. In the minds of many of Israel’s enemies, Tel Aviv is the real capital of the country, not Jerusalem. Iranian leaders, as well as those of Hezbollah and Hamas, have a thing for talking about attacks on “Tel Aviv” rather than “Israel.” They cannot even bring themselves to utter the name.

So, when the rockets were fired on Tel Aviv, skipping the usual warmup act of battering towns closer to the Gaza Strip, it was alarming, to say the least. This aggressive salvo broke the understood pattern of conflict and escalation in these parts.

There were patchy reports on the evening it all went down. An Egyptian delegation was meeting with Hamas officials at the time, mediating the easing of certain economic restrictions. Israeli media reported on Friday that the Egyptians were enraged. For their terrorist hosts to engage in such a reckless act was humiliating and would only exacerbate the tensions that resulted in the Strip’s economic isolation in the first place.

As reported in the daily newspaper, Israel Hayom, an Egyptian official thundered at Hamas leader Yahya Sinwar: “How far do you think you will get with this double game of yours? We are sitting here to hammer out the details of a cease-fire with Israel and behind our backs, you are authorizing your people to fire missiles at Tel Aviv?”

He then added, for good measure: “If Israel decides to launch a comprehensive military operation in Gaza, this time we won’t do a thing to stop the Israeli attack, even if the Israelis decide to dismantle your rule in Gaza by assassinating each and every one of you. While [Israel] is retaking Gaza, Egypt and its allies in the region won’t lift a finger to stop the Israeli response.”

Sinwar claimed to know nothing. He reportedly advised the Egyptians almost immediately that low-level Hamas operatives had been doing some maintenance work on a missile launcher aimed at Tel Aviv and unintentionally shot the rockets. Whether true or not, it’s a convenient explanation that will likely be embraced by all. With Hamas nearing its breaking point and Israel in the midst of an election campaign, no one wants conflict at the moment.

The “mistake” line is a face-saver for all. And, it may even be true. Who knows?

Following a brief chat with IDF officials, the Egyptian delegation crossed into Israel to avoid being caught in the near-certain retaliatory air strikes, which followed in a flurry and short order. The Egyptians also told Hamas to batten down the hatches and refrain from any more shooting to avoid a dangerous escalation. They couldn’t resist, lobbing a few more rockets at nearby towns for good measure before going quiet.

Hamas also canceled the Friday afternoon demonstration at the border fence with Israel; a weekly event for the past year. Hamas likes to present these as spontaneous grassroots expressions of anger, but they are clearly organized and promoted by the terrorist government.

The trouble for Hamas is there actually is grassroots anger in the Gaza Strip, but it is being directed at Hamas, not Israel.

Since the rockets were fired last Thursday, there have been civilian demonstrations against Hamas—a very rare occurrence—protesting the harsh living conditions which only seem to deteriorate.

One courageous middle-aged woman railed in a video circulating on social media, complaining that Hamas leaders and their children cruise around in luxury vehicles while her four sons are unemployed. “All of Gaza are unemployed because of Ismail Haniyeh and Yahya Sinwar. These officials care nothing about the poor people’s necessities. We have the right to live.”

The Hamas kleptocracy is in plain view, and the diversion of billions in aid and blood money into the terrorist and military infrastructure in the Strip has not gone unnoticed, it seems, by the oppressed populace.

Throughout the weekend there were ongoing demonstrations in the Gaza Strip, including reports of seven journalists having been arrested and beaten by Hamas as well as videos circulating of brutal beatings of civilians. Early reports regarding the self-immolation of a 28-year-old man may have been misleading, with the video thought to have been several months old.

It is doubtful that these protests will dislodge Hamas from power or change the way in which the theocratic despots rule. Only a serious and sustained financial rebuke from their main benefactors, Qatar and the United Nations Relief and Works Agency, would accomplish that.

Each for its own reasons is beholden to the principle of the Palestinian “right of return” to ancestral villages and towns in present-day Israel, a euphemism for the destruction of the Jewish state. Continued conflict and misery is the only certainty. 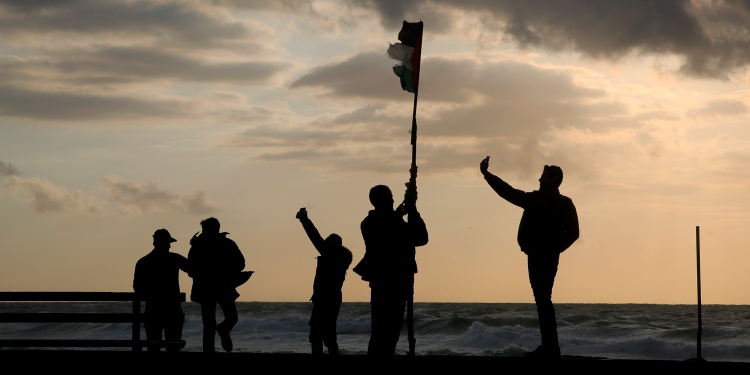