Things have been going quite swimmingly in Israel with the rollout—more like a public health blitzkrieg—of a nationwide COVID vaccination program.

That success is due to a combination of factors: an impressive mobilization of operations and complex logistics; a ready supply of labor called up through the military and national service systems; generous dollops of derring-do and an inability to accept “no” for an answer; oh, and the March 23 election Prime Minister Benjamin Netanyahu is determined to win.

The sudden global celebration of Israel’s public health triumph was like throwing hunks of red meat to hungry lions. On cue, many international media and numerous NGOs—the A-list—predictably twisted yet another positive moment for Israel into a negative in order to fit their preferred narrative.

This impressive vaccination drive is now regarded by many as further evidence that Israel is a warmonger, a human rights trampler, and an international treaty violator in extremis. In their telling, Israel, the apartheid outlier, is succeeding only because of its ruthless oppression of the Palestinians.

The core allegation against Israel, articulated most effectively by Amnesty International in a recent bulletin, is that Israel is “ignoring its obligations as an occupying power” and must “immediately act to ensure that COVID-19 vaccines are equally and fairly provided to Palestinians living under its occupation in the West Bank and Gaza Strip.”

Amnesty and its disciples allege that Israel is in breach of the Fourth Geneva Convention on War. As an occupying power in the West Bank and Gaza, Israel has a duty to ensure that all persons in those territories be vaccinated.

Let’s leave aside, for now, the issue of whether or not Israel can be considered an occupier of the Gaza Strip—a dubious position given its full and unilateral withdrawal from the area in 2006. Yes, Israel and Egypt oversee the flow of goods into Gaza (Israel facilitates the passage of tons of supplies into Gaza daily, whereas Egypt allows none). That’s hardly an unreasonable precaution when the primary source of employment in Gaza seems to be Hamas-sponsored construction of terror tunnels and weapons manufacture. Hamas is bristling with hatred, weapons, and an avowed goal to annihilate Israel. It is highly unlikely that they’d welcome an Israeli vaccine brigade.

The West Bank is occupied by Israel, a position that is de facto conceded by the Israeli government. So, quite right that the Geneva Convention applies, in particular, Articles 55 and 56, which set out the responsibility of the occupying power to ensure that adequate health care and provision of medical supplies are available to the occupied population.

Under the Oslo Accords, the Israelis and Palestinians negotiated and agreed, directly, that certain powers would be assumed fully by the Palestinian Authority. There is strong consensus in the international legal human rights community (aside from hard-core Israel haters) that the Accords effectively transfer such authority to the PA.

Only where the PA refuses or is incapable of exercising such authority with reasonable diligence may Israel invoke its residual jurisdiction, under Geneva, to override PA conduct. Oslo addresses the PA power, duty and authority to provide, manage and oversee all health care matters, including disease and vaccination, in painfully clear language at Annex III, Article 17, stating, in part:

While Amnesty and others rail about Israel shirking its responsibilities under Geneva, they seem to have skipped some rather important details; among them the whole Oslo thing.

These are the facts. None of this has kept the usual suspects from using Israel’s vaccination success as a weapon against it. Perform a cursory investigation and you will be assaulted with the braying of (among others) Amnesty International, AP, Al Jazeera, and that giant of unbiased journalism, the Guardian—a paper best read with a salt-filled chalice in hand. No need for poison.

Oh, and I would be remiss as a Canuck myself if I failed to acknowledge the exceptional efforts of Canadian Member of Parliament Charlie Angus to join the melee and amplify the ignorant and baseless charges.

Never heard of him? That’s kind of the point. People like Charlie, representing a hardscrabble, mining-based area of northern Canada for the socialist New Democratic Party, has read the Guardian. And the Washington Post. So there! If those august publications indict Israel as an apartheid state, well then, case closed.

Thing is, there are millions of Charlies in the world who have become instant international human rights experts and have wasted no time in grabbing their bullhorns to spread the lie.

This is how the seed is planted, watered, and proliferates—weed-like—choking any semblance of fact or fairness. This conduct is tried and true and rooted in a fertile, longstanding, often institutionally promoted loathing of Jews.

Not until 1965 did the Vatican agree that the Jews were not, after all, responsible for the death of Christ. Christian anti-Semitism was deeply entrenched in much of Europe then, and it still is very prevalent today. So many pogroms for millennia used “Christ-killers” as the unassailable justification for the mass murder of Jews.

In the early post-war years, there was a slight softening towards the ravaged, haggard remnants of European Jewry. Even on the Continent, there was something riveting about watching this ragtag assortment of Holocaust survivors and assorted Jewish refugees, miraculously and against all odds, repel repeated attempts by bordering states to destroy the newly declared country. As a diplomat from a major European country smugly put it, over coffee one day when I was serving as Canadian Ambassador to Israel: “Ah. Plucky little Israel. That’s what we related to. The Israel of 1967.” In other words, we prefer our Jews to exist on the knife-edge of annihilation. So exciting.

As Israel flourished and grew beyond a poor, agricultural-based, socialist economy into a tech powerhouse, the attacks only intensified. Even if Israel manages great achievements, as it has and does, they are always suspect, always debased; Israelis, and Jews, are so often depicted and thought to be unstoppably malevolent. Like it’s in their DNA.

Most recently, public intellectual Einat Wilf distilled the paradox brilliantly in a tweet:

In the COVID instance, the attacks are especially resonant. Allegations of Jews spreading disease have persisted for millennia. Thousands of Jews were slaughtered in medieval Europe, blamed for deliberately spreading the killer Black Plague among Christians by poisoning wells. History is more than replete with such examples of Jew-hatred, all well documented.

Fast forward to the 20th Century, in which the libel of Jews as disease carriers and spreaders was a foundational principle of Nazi Germany and a key justification for their mass murder.

This particular libel—disease spreader—has been a favorite in the Arab world, too. More than a few Palestinians in positions of leadership have openly accused Israel of somehow infecting Yasir Arafat with the AIDS virus, causing his death. Oh, and for good measure, there were widespread allegations that he was poisoned further by the Israelis. Even his widow—no fan of the Jewish state—recently rejected such nonsense, out of hand.

So, this au fait notion—promoted by the Guardian, among others—that Israel is preventing the Palestinian Authority from procuring and administering a COVID vaccine to its people has a particularly strong stench.

Here they go, again, those darn Jews, intentionally facilitating the spread of disease.

The mob of Israel libelers has conveniently overlooked the International Committee of the Red Cross Commentary on Article 56 of the Geneva Convention, because, one can only assume, it doesn’t support the evil-Jew narrative. The ICRC interprets the Occupying power’s responsibilities even more narrowly than Israel has applied them, stating:

“…there can be no question of making the Occupying Power alone responsible for the whole burden of organizing hospitals and health services and taking measures to control epidemics. The task is above all one for the competent services of the occupied country itself. It is possible that in certain cases the national authorities will be perfectly well able to look after the health of the population; in such cases the Occupying Power will not have to intervene; it will merely avoid hampering the work of the organizations responsible for the task.’”

So, for now, the Israel vaccine libelers ignore this unhelpful commentary and focus, disingenuously, on fabrications rather than facts.

As uncomfortable as it may be for some, the PA has done an excellent job for more than 25 years of fulfilling its health-related duties to its population under Oslo and is, quite rightly, proud of it. In fact, until this hornet’s nest was stirred up by Amnesty, the Guardian, and others, the PA was doing at least as good a job of COVID vaccine procurement and related rollout planning as many European countries.

Interestingly, not only was PA leadership quiet about the whole non-issue, but anyone who undertook a lazy Google search would discover that numerous PA officials, including President Mahmoud Abbas, have made repeated statements in recent months lauding their own handling of COVID and vaccine procurement. They have further indicated, repeatedly, that they neither require nor request assistance from Israel. So, it seems, Oslo is working with respect to health care.

But, that’s not good enough for those obsessed with demonizing Israel. This lot takes the position that Israel must forge ahead, Oslo notwithstanding, and force a vaccine program on the PA and Palestinians.

This position is not only without merit legally, it is utterly condescending: the discrimination of low expectations, taking the default position that the PA cannot manage its affairs. Ironically, the Charlies of the world are agitating for Israel to step up and act like a real occupier and get on with things.

But the legal test, as Amnesty well knows (and is set out in Oslo) is not whether the PA can match Israeli performance, but, rather, whether they are functioning responsibly— “according to internationally accepted standards in the field”—and acceptably to protect their population.

And the answer to that question: Is the PA functioning with respect to health matters, according to internationally accepted standards in the field?

The answer is an unequivocal “Yes.”

The fact that Israel is eclipsing all countries in the world in terms of speed and efficiency of a national vaccine rollout does not vitiate Palestinian authority under Oslo and Amnesty bloody well knows that.

On Monday, a month or so after AP started sowing this latest Israel-Jew hating rumor, so enthusiastically lapped up in so many places, the PA very belatedly got around to issuing a media brief on this brouhaha, introducing the notion of “medical apartheid.” The lengthy document, likely produced in response to extreme pressure from the anti-Israel brigade, regurgitates all of the above attacks but, also, curiously omits mention of the ICRC commentary.

The issuance of this document is an unfortunate public humiliation of competent PA health officials. They have been managing the vaccine program capably thus far. And they, too, know better than to self-demean and outright lie.

By promoting the demonization of Israel in this context, the PA is forced to bow to its foreign propagandist overlords, practicing the most treacherous, sinister imperialism—while posing as superheroes concerned only with human rights.

If they truly were so high minded, Amnesty and their ilk would accept and encourage this considerable progress on the part of Palestinians to engage in critical self-determination efforts.

Instead, they bend over backward to perpetuate and reinforce a narrative of Palestinians as abject, helpless victims. It does nothing to reinforce their nascent and desperately needed foray into productive nation-building. Quite the opposite, it reinforces anger and hopelessness.

It also furthers the agenda of the Israel demonizers; a modern take on the Jew poisoning the wells in the Middle Ages. 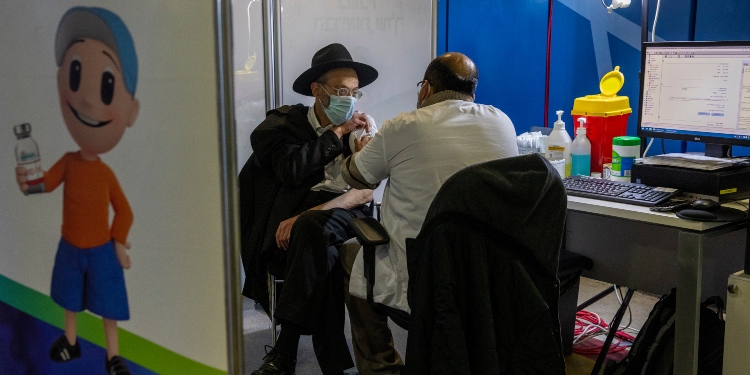 The Great Mysteries of 2022